Along with about 16,000 other people, I am just back from the 2012 ASUG-and SAPPHIRE Annual conference in Orlando and collecting my thoughts to share with all of you.  Under the categories of cloud and human capital management, the buzz was all about Success Factors – that über-sexy looking software that most of us know as SAP’s former competitor in the Talent Management area.  I had the good fortune to hear Lars Dalgaard – founder and CEO of Success Factors — speak to a group of HR business leaders about the transformation underway to bring these two software companies together.

Is Lars the “real deal?” someone asked me.  In my opinion, yes, he is.  During this informal conversation with Lars, he was casual, relaxed, and – yes – very, very tired of the questions about SAP and Success Factors integration.  As he took his chair on the stage in the conference room, he quipped that there would be no integration, that they had abandoned the very word.  He had spent long days talking about the integration piece and knew that was the first question on everyone’s minds.  Despite his banter, he did address the issue head on and articulated his confidence in the development team he assembled to bring SAP and SuccessFactors together.  Lars exhibits many of the qualities associated with successful business leaders in this new era of constant change: innovation, creativity, a strong sense of self and the ability to understand his workforce and maximize their capabilities.

But how is this all going to fit in at SAP?   Is there, in fact, a roadmap for all this change?  The privileged participants at SAP’s Executive Leadership forum in Orlando last week got the straight talk from Steve Winter, SAP’s Executive Vice President for HCM Solutions.

But the two companies are wasting no time in working to make these things happen.  On the developer front, SAP developers in Walldorf are working long-distance with SuccessFactors developers in San Mateo, California. While at the conference, I participated in a usability study on generation 3 of SuccessFactors’ Employee Central Application.   The session was led jointly by a Walldorf developer and a San Mateo developer.  I won’t say that the two developers appeared comfortable being part of one company yet — but the efforts to merge the best practices of two distinct companies are showing progress.

On the sales front, it’s not so clear how SAP and Success Factors will align their respective staffs around a common message.  It was clear in speaking to other customersthat individuals had come away from discussions with sales people with the sense that Talent Management had to or should be deployed on SuccessFactors.  A common miscommunication to potential customers is that customers would not want to invest in their on-premise SAP software for Talent Management since SAP is not going to develop it any further.  While that’s a nice sales pitch for SuccessFactors and cloud software, it is a dangerously slippery slope for SAP’s future in the HCM world.  SAPcannot afford to alienate existing customers by allowing them to think for one minute that their current investment in on-premise software is no longer a viable platform for expansion and growth.  Cloud comes with a pricetag of it’s own and the jury is still out on whether or not going to the cloud makes economic sense for each company.  In fact, Steve Winter and Irene Ortiz-Glass (VP for SAP’s HCM Center of Excellence) emphasized that each customer would have their own roadmap — there is no single solution, no “one size fits all” approach.

Lars put it most succinctly when he said “They said Video would kill the radio star…but it didn’t…I still listen to the radio all the time.”  The radio didn’t go away – and neither will SAP HCM on-premise.  Stay tuned to this radio dial for more information as the integration — er, collaboration — story between SAP and SuccessFactors unfolds.

*Video Killed The Radio Star
by one-hit wonder, The Buggles 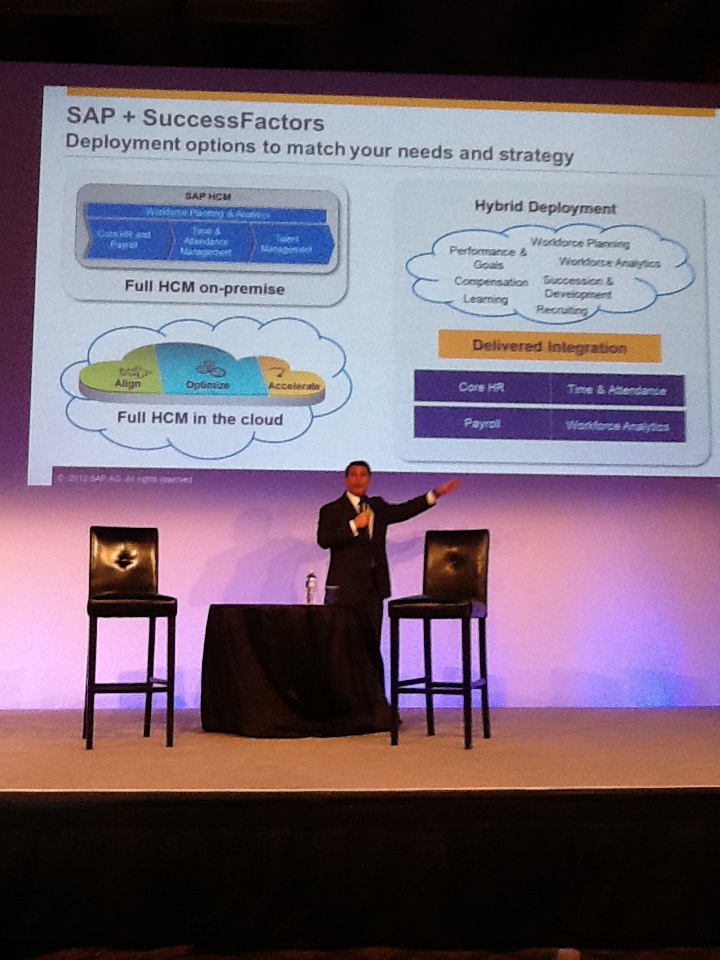 Just wanted to say you've written an excellent blog here.  I didn't attend SAPPHIRE but it's nice to get some perspectives on this topic whilst in the comforts of my home in Melbourne.

Great job, and hope to hear more from you in future.

Please to meet you John!   I hope to have time to write more and share my thoughts.  Thank you for the nice compliment.

Excellent content and great to see analysis from a customer perspective.  I hope you, SherryAnne Meyer, keep generating such additional quality reads for SCN.  Bravo!   I noticed that you posted this under your personal blog space.  In the future, may I recommend putting your content into the HCM space so that it has more possiblity of being highlighted and read by the wider HCM community on SCN and more easily found by the editors.

I would like to quibble with the leadership definitions just a wee bit:

Lars exhibits many of the qualities associated with successful business leaders in this new era of constant change: innovation, creativity, a strong sense of self and the ability to understand his workforce and maximize their capabilities.

I had the good fortune to spend a few hours with soon-to-be graduating students in the University Excellence program.  They were hosted by SAP HR at SAPPHIRE and they had a very interesting perspective around their preferred workplace and its leadership.  Above and beyond compensation they seemed focused on collaborative innovation, creativity, flexability and above all collaboration with their leaders.  In your description of leadership I didn't see that collaborative word.  Understanding the workforce and maximizing their capablilities means a deep understanding of your workforce culture and the ability to collaborate with that culture even if it clashes with one's own individuality.  It takes a special kind of listening.

Welcome back here SherryAnne in the new blogging environment and looking forward to your perspectives and shared insights.

Marilyn - thank you.  First - I'm still learning this space - so I missed the fact that I did not put this blog into the HCM space.  Secondly - COLLABORATIVE is what I was after in describing what I saw in Lars.  I have to thank you for articulating that AND for sharing your story about the graduate students.  I see a definite - not subtle - change in what is required of leaders today and I wonder if our current leadership teams that are in place can rise to the challenge.

To see some of what customers are current doing with on-premise read Where the Rock Stars and Heroes are ASUG-SAPPHIRE 2012 http://scn.sap.com/community/erp/hcm/blog/2012/05/20/where-the-rock-stars-and-heroes-are-asug-sapphire-2012-20-of-my-top-picks