It’s hard to impress me with statistics and factoids. I’m inundated by them all day, every day. But these new findings, courtesy of iPass’s latest Mobile Workforce Report, blew me away: 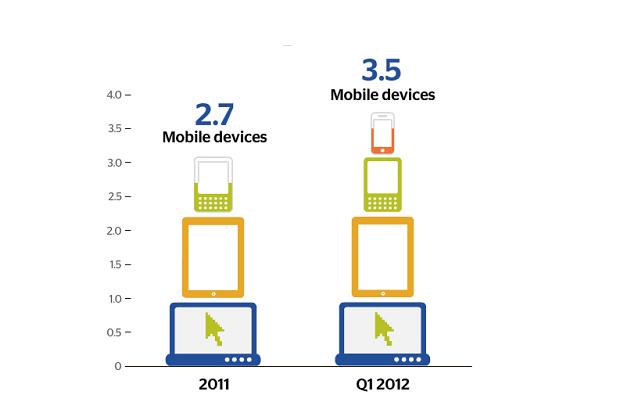 Click on the infographic above to go to the Times of London, which created this and other snazzy chartsbased on iPass’s stats.

At first blush, that 3.5 device/worker figure seemed awfully high. Then I started thinking about how I plan to pack for the SAPPHIRE NOW conference in Orlando next week. One company-issued Dell laptop, one personal iPad and one individually-liable, company-paid iPhone. That’s three devices right there. And I know plenty of people, especially those working at BlackBerry-only companies, that carry an additional iPhone or Droid for personal use.

iPass’s survey reached that figure in a different manner: 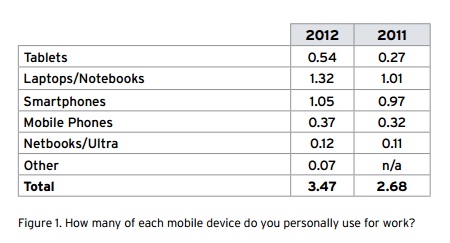 – only about half of workers today carry tablets (though that’s double from the prior year);

– about half of mobile workers carry an additional laptop/netbook for work;

– about 40% of workers are carrying two phones, i.e. one for work and one for pleasure.

2. 80% of mobile workers will be carrying a tablet within 6 months, according to iPass’s data. So yep, the overall number of devices per worker is set to keep growing (it’s up 30% from 2.7 mobile devices a year ago).

3. On the other hand, the number of phones/worker may hold steady or actually shrink. Why? Because workers are clamoring to have their smartphone enabled for both work and personal use – 92%, according to iPass- presumably in order to to lighten their load and soothe their aching shoulders. Expect companies to accelerate the pace of adopting Bring Your Own Device (BYOD) policies in response.

4. The data begs the question: how many of those devices are being secured today? Most of those laptops are probably secure. PC management software is, at this point, fairly common and widespread.

But my other guess is that most of those tablets and probably half or more of those smartphones are not or only lightly secured today by Mobile Device Management (MDM) software.

That’s because MDM software remains underused by IT, often because companies remain unsure whether they should or need to secure employee-owned devices brought in under BYOD policies.

It’s a risk, though: mobile devices increasingly hold important data (think of the private customer and financial records that your CEO’s iPhone holds) that if lost or stolen can cost companies plenty in remediation costs or regulatory/legal penalties.

The excuses for IT not to choose a strong MDM solution get fewer and fewer. Take SAP Afaria, part of the larger SAP Mobile Platform that was ranked tops in Gartner’s Magic Quadrant for Mobile Application Development Platforms.

Heard that Afaria is complicated to learn? Well, the latest version 7.0 brings a new, simplier UI.

Think Afaria’s expensive? You can get Afaria as a managed service from Verizon Wireless or ATS, which caters explicitly to small to medium-sized businesses. Managed services don’t require pricey, lengthy installs, instead letting users pay monthly subscriptions that can be discontinued anytime.

Like the cloud but still want to have more management control? Then you can get Afaria as hosted software running on Amazon.com’s cloud storage.

If you’re coming to SAPPHIRE NOW in Orlando next week, please come by the Mobile Campus to check out Afaria demoes. Or register for one of 18 sessions where you can learn more.