Setting up the Development and Deployment Environments for using the Crystal Reports .NET SDK

The purpose of this document is to provide the checklist of the things to be installed for using Crystal Reports with Visual Studio and on the machines where application(s) is/are to be deployed.

While using Crystal Reports one should understand that there are certain prerequisite for creating the environment.

Development machine is the machine where application is developed. Mostly everyone use Windows XP, Windows Vista or Windows 7. For creating the same please follow the steps given below:

Ensure that Visual Studio 2003, 2005 or 2008 is installed preferably Professional Edition (though Standard edition and above are supported as these are the versions that accept plugins).  Install the Designer/Standalone on the machine.

Note: Redist Install (Windows Installer), Merge Modules or Click Once runtime are not meant to be installed on Development Machine.

Installing the windows application on client machine requires .NET Framework and Crystal Reports runtime. There are three ways of deploying the application – Redist Install (Windows Installer), Merge Modules or Click Once. Download the runtime of a respective version of Crystal Report.

Web application would be deployed on the machine which has IIS like Windows Server 2003, 2008 or 2008 R2. These machines are often referred to as web app server. Web application can be deployed in two ways – Redist Install (Windows Installer) and Merge Modules. Download the runtime of a respective version of Crystal Report.

Download the the Developer’s Guide and open it as most of the information is already documented.

Go to Setting Up The Development Environment > System Setup. 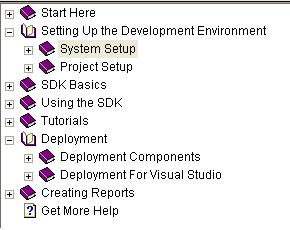 64 bit is available only for Redist Install, rest everything is 32 bit.