The usual product disclaimer applies as it is future and forward looking and the content below may change.

Eric Schemer leads the BEx and Analysis Product Management team.  He and his team provided this ASUG webcast on Tuesday, May 8th. 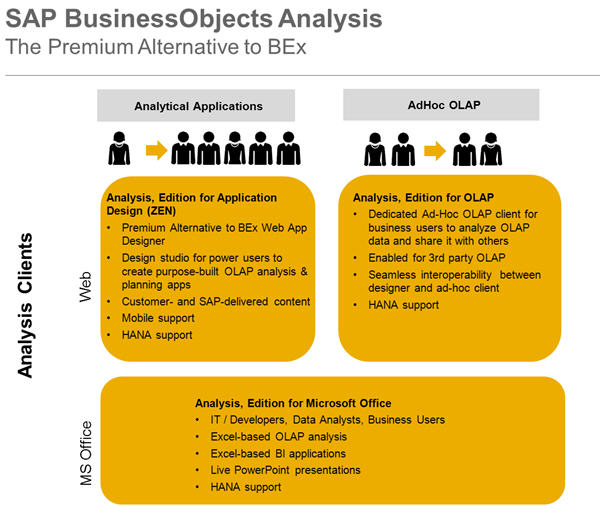 The final naming of the product is still to be announced: ZEN /SAP Business Objects Analysis, edition for application design are very likely preliminary names. 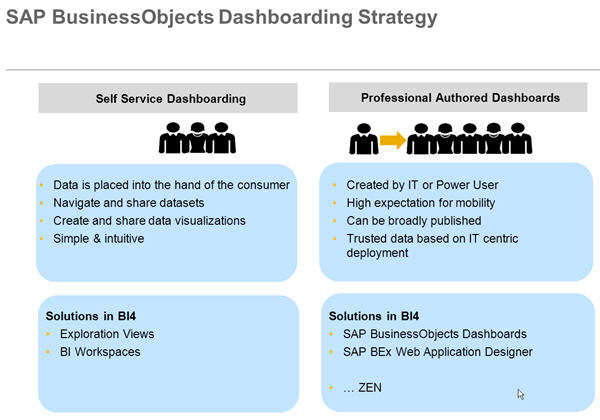 Mission of ZEN will be broader in the dashboard area.  Long-term it is planned that Zen will become the overall foundation for general dashboarding and analytic design.

On the left of Figure 2 you have self- service dashboards on the fly, which is tackled with Exploration and BI Workspaces.  Stay tuned for SAPPHIRE for announcements.

For large enterprises where dedicated experts in IT or power users are creating dashboard content for others – we distinguish between designers and consumers of dashboards. BusinessObjects Dashboards and BEx Web Application Designer fits and with this is where ZEN fits in along to merge those solutions in the future. 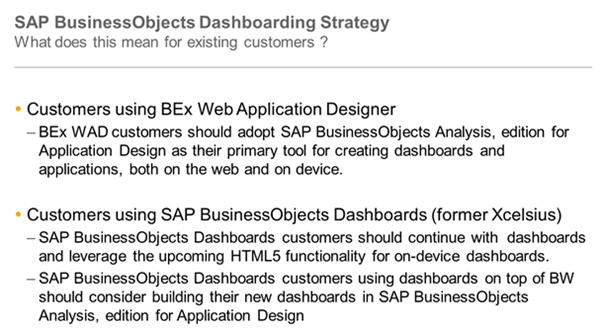 Figure 3 shows that SAP proposes that ZEN is the primary application for dashboards.

For customers using Dashboards on BW may want to consider ZEN to see if it meets your needs. 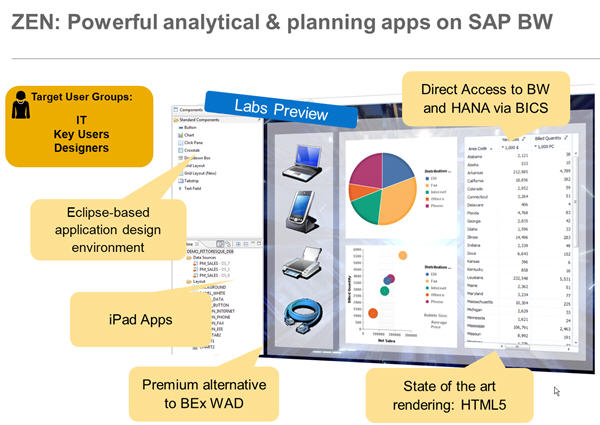 ZEN and Analysis are built coming from an SAP-centric engine story.  ZEN will offer direct online connectivity to BW/HANA via BICS in the first release. ZEN was built for the classic BW/HANA native and combination BW/HANA.  From a BW perspective you can use the BEx query as your key access model  as well as the other Analysis products honor this capability.

Figure 4 shows the current architecture.  In the future ZEN will expand into other data sources such BusinessObjects semantic layer. 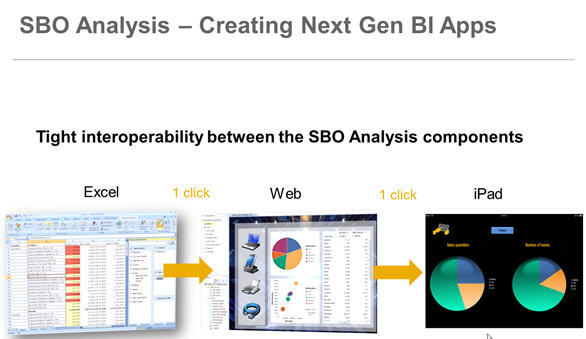 ZEN is part of a larger family of products aiming at a seamless BEx-like interoperability, between the Excel, Web and mobile world.  It is planned that artifacts can be shared with Analysis Office and then transformed to mobile application via clicks. 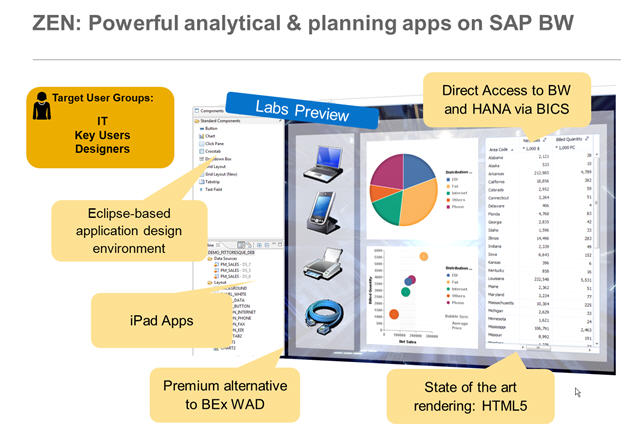 ZEN has an eclipse plug-in built for power user, for people who build and design dashboards for others.

The Information Design Tool and the Hana studio use eclipse plug-ins.

Key feature for ZEN is iPad application design and eventually will move to other devices.

Eric said customers said iPad should be major focus.  The rendering should be HTML5 which works in web-based environments and iPad.

HTML5 will take advantage of a large community in SAP to build new components and controls from the HTML5 library.

Investments in BEx query are safe. 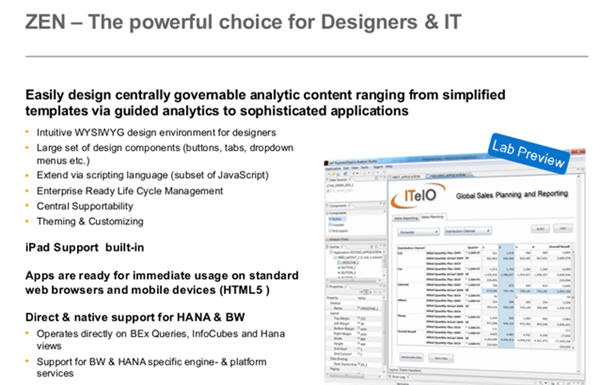 Figure 7 shows that need centrally governable manageable content and to maintain and support the organization.

For ZEN what you see is what you get experience and you get a sense of how the application looks as you build it.

SAP created a scripting language which is a subset of JavaScript so anyone familiar with it can start using it.

Theming is a major aspect, changing the look and feel of applications 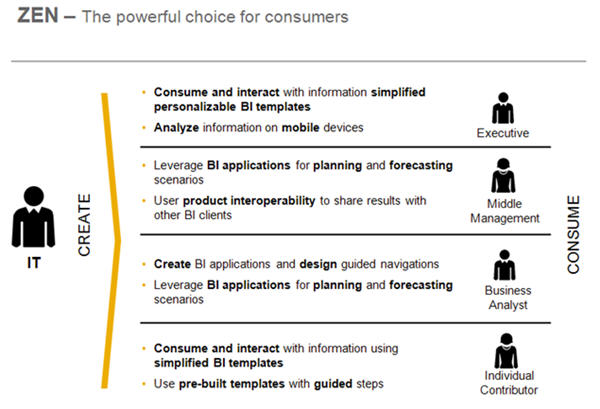 Concept for Zen is to differentiate between design time and run-time.  Power users designing and others consuming versus Business Objects Explorer which offers ad hoc designing.

Eventually ZEN apps will become personalizable to a certain degree without having to call in IT for changes. 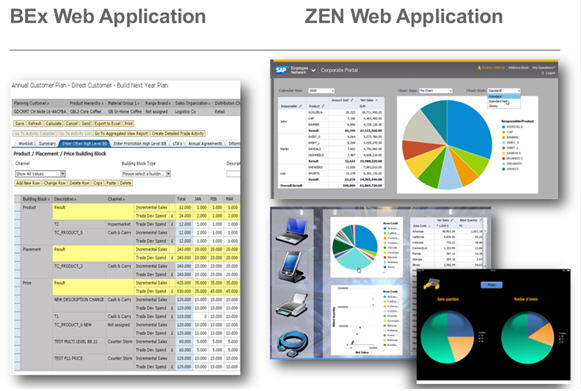 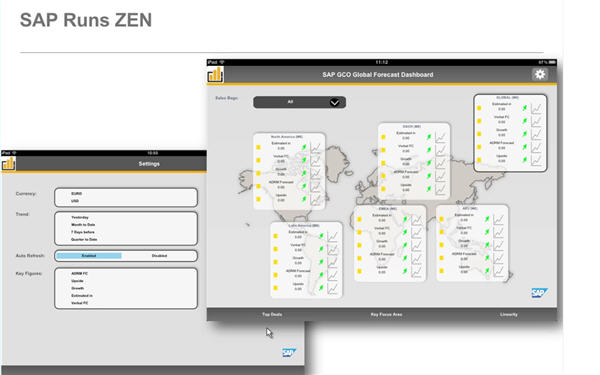 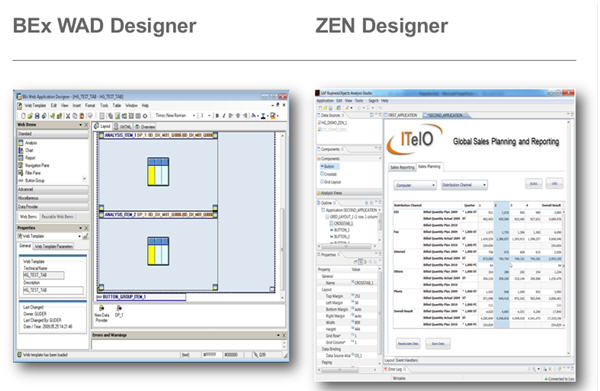 Figure 11 shows design times.  ZEN is “What you see is what you get”.  Web Application Designer (WAD) became more complex over time.

ZEN will have free form pixel exact layout in the container. 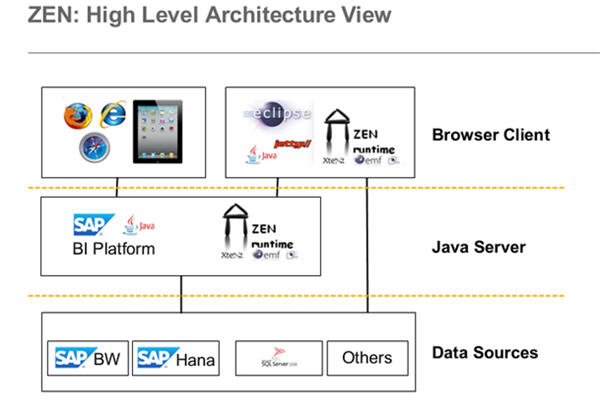 Zen ships with runtime on client side.  This allows the user to work without the need for platform central platform during the design process.  .    The SAP BI Platform comes in to play when you publish the applications to users.

Planned features for ZEN 1.0 include for the Designer (Disclaimer applies):

Another planned feature is interoperability with SBO Analysis, edition for MS Office 1.3 and Analysis OLAP 4.1.

For a demo of ZEN, please see this link:

Q: Any idea as to how the performance will be in a ZEN based dashboard using HTML 5 vs. a current Flash based engine?

A:  Performance will be enhanced

A: Yes, following same approach as Analysis Office; planned, not in first release

A: Recommend using SBO Dashboards as no direct access to SQL Server in ZEN; planned for a future release

Q: So is Zen going to become the better frontend tool to use with HANA?

Q:  Since ZEN is an enhancement for WAD and since WAD uses BEX Web Analyzer, will BEx Analyzer be also enhanced as well?

A: No plans to end of life to BEx products but no major investments

Q: Is Zen really going to be an out of the box iPAD design tool? Working with the SAP HANA database sources too? When will that be out?

A:  Yes, building HTML5 based applications to run on different devices

Q:  Will ZEN templates be transportable?

A: Yes – via BI Platform based transport mechanism

Q: After there is interoperabilility with the iPad, how long will it be before similar functions become available on  Android tablets?

A: Currently looking at support Androids at release 1.0; not firm, subject to change

Q: Will ZEN have capabilities that Xcelsius has?

A: That is the long term plan, one solution over time; on the longer-term roadmap

Q: What is the future of Visual Composer

A: In maintenance – by SAP Support with no feature development

Q: Is it recommended to start building applications with ZEN if we have not yet built any dashboards with Dashboard Design?

A:  If you are a BW customer then yes

A: currently  subject of discussion

Q: you mentioned something about broadcasting for 2013 in your slides, can you talk a little bit more about this – what is being provided.

A: currently subject of discussion

Q: Does Zen have the ability to access the semantic universe layers as a source?

Q: What is the advantage of using ZEN over dashboards.

A: At this point in time it’s enhanced BW & HANA integration as well as it’s native iPad design capabilities

Q: What is the relation to the HILO app?

A: stay tuned for announcements, potentially at Sapphire

Q: When will Zen be available for developers to use with SAP HANA?

Q: Will there be a tool convert existing WAD developments to Zen?

Q: Will offline dashboarding be possible in any way?

Q: When you create a ZEN dashboard for the desktop, do you have to go into every page and chart to change the theme to the iPad mobile theme?

Q: Will Zen support broadcasting? Will this part of BI4.0?

Q: is there a debugging tool in the IDE

Q: I would love to be a beta tester for ZEN, how can I sign up and help?

Q: Will the Xcelsius embedded spreadsheet interface be brought into Zen

Q: Is Zen only for BW/HANA or can it be used against BO Universes?

A: Universes are planned for a future release

Q: If the output is HTML5 which is supported on Android as well as iPad why is Android coming later ?

A: timeline for Android is subject of dicussion

Q: what about using GIS components (like google maps integration) on ZEN

For further information please join us next week at ASUG Annual Conference see the list of Analysis sessions here.

Our thanks to SAP speakers Eric Schemer and Jie Deng and our ASUG Volunteer Joyce Butler for hosting.

Is this a joke? Of course BPC deserves this much appreciation.

If you go to http://service.sap.com/roadmap you can see the Roadmap for ZEN and it mentions planning but not BPC specifically.

I recommend posting this as a question in the discussion forum and we can ask SAP to respond.