Cleveland-based Safeguard Properties inspects and maintains more than a million foreclosed homes per month across the United States. It does so on behalf of their owners, primarily large banks and government agencies like Freddie Mac and Fannie Mae.

The huge number of foreclosures, as well as the slim margins in the inspection business, forces Safeguard to be more resourceful than competitors.

In August 2011, the privately-held company began piloting to its network of 8,000+ freelance inspectors a field service app called INSPI2 that runs on their personally-owned iPhones, iPads and Android devices.

The new app has several advantages over its predecessor, for both inspectors and Safeguard, said Bill Cook, a senior IT project manager at Safeguard. First, the app boosts the speed and accuracy of inspectors. One way is by pre-filling out the electronic forms based on existing data, as well as informing users when new, incorrect information they’ve entered in doesn’t reconcile with existing data.

“Even a 5% increase in accuracy can translate to significant speed and cost savings on back-end processing,” Cook said.

The app boosts speed by letting users attach photos of the home taken with iPhone or Android smartphone straight into the relevant part of the INSPI2 form.

The increases are especially strong for the substantial percentage of workers that were still documenting a house on site using paper forms and digital camera, and then entering data and uploading images into INSPI afterward via their laptops.

The app also creates driving routes for inspectors based on what homes they have been scheduled to work on that day. That also saves inspectors, some of whom will inspect 70 to 100 homes a day, a lot of time.

“Most of the users love it,” Cook said.

INSPI2 augments a Web site and client application that is still in use on laptops and PDA-type Windows Mobile devices. After just six months, it is already proving to be less expensive to support, with fewer calls per user to the help desk, said Cook.

The biggest boon of the new mobile app is in how much sooner that inspection results can be uploaded to Safeguard’s servers: a 50% reduction in time, says Cook, that he credits to the 3G capabilities of the iPhones and Android smartphones, unlike the PDAs and laptops which only have Wi-Fi.

This nearer-to-real-time data transmission lets Safeguard deliver results to clients faster, as well as allow inspectors – who are paid per inspection – to get their checks more quickly.

Though Safeguard has 1,000 full-time employees, it only has two mobile developers on staff. So it turned to a California-based consultancy, Appstem Media, to port INSPI from Windows Mobile to iOS and Android.

Appstem built INSPI2 using the Appcelerator Titanium development framework. Appcelerator, which last month announced that it would connect with the SAP Mobile Platform, was chosen because it supported native apps on multiple platforms as well as HTML5 mobile Web apps.

Appstem wrote most of the application, with Cook’s team doing the final 20%.

(Appcelerator executives including COO Sandeep Johri, vice-president of sales Trenton Truitt and vice-president of strategy Brent Maxwell, will be at the SAPPHIRE NOW conference in Orlando next week, including hosting a cocktail party on Monday May 14 at 6 pm at the Peabody Orlando hotel. Sign up here.)

Cook is pleased with the Appcelerator platform, though he notes that it took more work and time to get the Android app working as well as the iPhone. There has been a steady increase in the stability and capabilities of Appcelerator’s framework over the past year, he says.

Cook has also started Appstem working on a list of improvements for INSPI2, including: improved routing including geocoding to verify that inspectors are at the right home, a native UI for tablet versions of the app, better camera integration so that users can take and tag photos faster, and real-time notifications of contractors via text messages.

“These changes will give us real bang for the buck,” Cook said. “We expect a huge jump in adoption of the app at our annual vendor conference this summer once we take it out of ‘pilot’ mode.”

Safeguard is also looking into building other apps for its REO and Property Preservation service lines, which provide services such as securing a property, debris removal, property maintenance, and rehabilitation on behalf of mortgage holders, Cook said.

The quarterly Enterprise Mobile newsletter that I edit has moved from Sybase to SAP. You may view the latest issue here or sign up to subscribe here. 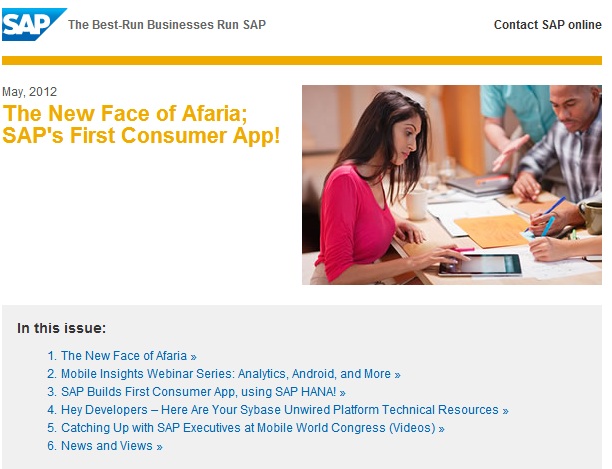