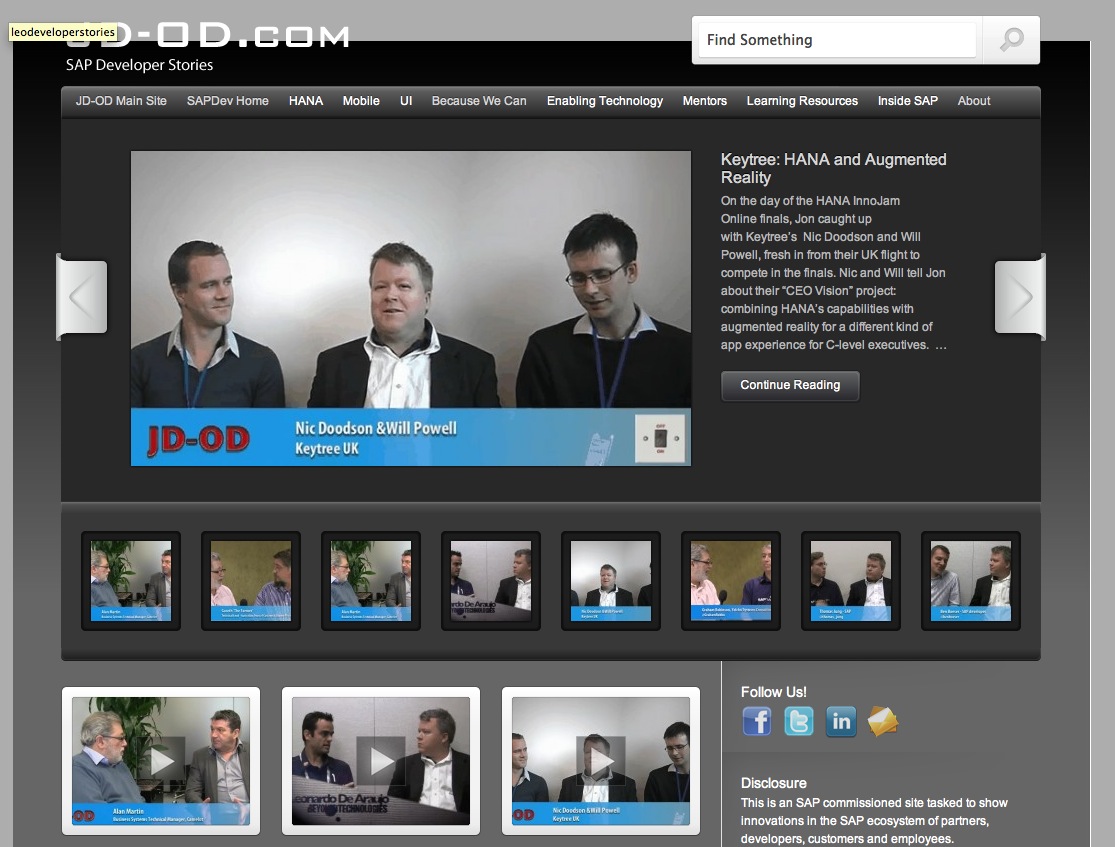 Regular readers will know that I have long championed the cause of SAP developers. They are the lifeblood of innovation. They are, as James Governor says the ‘new kingmakers.’

A few months ago, Jon Reed and I approached Vishal Sikka with an idea. The conversation went something like this:

Us: “You know Vishal that SAP loses 95% of its innovation. Events like InnoJam, TrainRace and DemoJam show us the art of the possible but after the event it all dissipates. We almost never hear what happened afterwards. That’s a crying shame because among other things, it means that developers only get fleeting credit for some of the amazing things they do.”

Vishal: “You’re right. We should fix that.”

Us: “We think that if there was a permanent home for some of the best development things we can find then that might be an encouragement to others. How about if we found some of that stuff, videoed it and then hosted it for SAP on JD-OD?”

As you can probably gather, Vishal doesn’t waste words!

We had a few conditions.

The only concession we made was that SAP gets to see what we produce before it goes live. SAP didn’t give us any push back on anything we produced.

A few weeks later with PO clutched to chest, Jon/I were on the road, visiting different places around the world. I went to the UK, DKOM Germany and Australia while Jon bounced back and forth to events in the US. Between us we traveled some 30,000 miles in seven weeks.

Today, we have the results of this initial trawl. You can find it here on JD-OD.com, SAP Developer Stories. It isn’t just developers. We’ve found the odd customer, we’ve talked to internal people at SAP working on HANA and other technologies. In other words, we cast the net wide with a view to getting as much useful material as possible.

We were tasked to find 10 examples, in the end we produced 14 videos and there is more to come. All have a story to tell that we think developers will find interesting.

These are just a few examples. We’ve only scratched the surface. At the upcoming SAPPHIRE, I hope to film some of the SAP developer engagement team. We will talk through progress on the issues we all know about that have sometimes made development on new technology a trial of strength, endurance and plain doggedness to work through issues. I’ve already booked a slot with Harald Reiter, talking about some of the things Deloitte is doing on HANA. I”d be delighted to get cloud/SaaS stories and of course more on mobile.

If you are a developer, know of developers and/or customer stories where innovation is making a real difference then please let Jon or I know. We’d love to hear your stories and, if possible, get you on video. If you spot us at SAPPHIRE then say hello. We’ll likely be on the run but do stop us.

Bonus points: check out the Mastering SAP Technologies mashup video and look for Graham Robinson controlling a helicopter with ABAP and Siri. It didn’t make this cut but is a great example of ‘Because We Can.’

Thanks for your post.  I know I said it in your video interview with me, but for those who didn't see it the new UI we built in favour of the standard SAP web offering was accomplished with a brilliant group of hard working individuals (to steal a quote from Sascha Wenninger ... 'I sat in my ivory tower'), including design consultants, web developers, and SAP ABAP developers.  I set the architectural direction to rewrite the UI, based on a indepth assessment of the standard SAP offering and helping to build an initial proof of concept.  Choosing to rewrite the UI is not something one does lightly, but when you are deploying to 80,000 customer users you need to be sure that the usability of the solution is spot on (after all, you can't train them all).  We decided to combine the talents of our in-house web team, using the same web templates used for our public website, with the talents of our SAP development team (some in-house, some contractors), as well as the vision of our integration architect Sascha Wenninger to build a RESTful architecture.  Note that there was no large SI involved, this was an internally delivered project.

Interestingly, the thought processes towards this originated with a simple blog I posted a year ago (and even before this intended project was known to me).  In the blog I say ... "I have always believed that there is an untapped opportunity to combine the capabilities of the SAP ICM (Internet Communication Manager) and custom HTTP handlers, with the broader web community and technologies that have evolved in that realm.".  The UI which was created for this project was born out of that belief.  But it took some hard-working individuals to bring that to fruition.

@john - you guys crushed it on re-design but then I felt that Aus devs are doing a better job than most in finding fresh ways to 'get things done.'

thanks to both you and Jon for triggering off this initiative. A place to collect all mad, bad, great and not-so-great developer ideas will be a valuable resource and hopefully a source of inspiration.

I hope SAP continue to support you and I will keep my eyes and ears open for other relevant stories.

And examples like those of Gareth Ellem describing a real-world example of coming around to user-centric design principles is also a great lesson for all.

p.s. I can't believe the Siri.Done demo didn't make the cut given there are so many real-world use cases for ABAP controlled helicopters. 😀 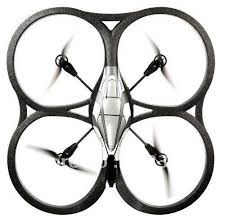 @robbo - awwwww, we couldn't let you have ALL the glory. 😀

To your point about support, SAP has indicated it wishes to continue with this project. We'll have to wait/see what they have in mind but Jon/my view is that *if* we can keep the format pretty much the same and *if* we can continue to choose and *if* enough developers are prepared to stand up and do a bit of arm waving then we could have a really good collection of 'stuff' come the TechEds.

What I'd really like to do though is get into some live stuff so that we not only capture the essence of developer goodness but have the ability to bring that to life in real time and across a broader spectrum of topics while keeping true to the notion of innovation. That requires a substantial investment on our part so we do have to see more action on the SAP side. But then I am a patient person when I need to be so...