Plumbing may seem like a strange word in a telecoms focused blog – especially one that highlights Long Term Evolution or LTE.  Still, that’s what it is.  Plumbing moves something from one place to another – typically through pipes.  In the plumbing that we all rely on, water or gas is moved to faucets, heaters, cooktops and other other appliances.  In the mobile telecom world, we have new and shiny LTE networks being deployed around the world.  To move all of that data between these high speed network island, we need plumbing – and that plumbing is called an IPX.   Peter Bernstein put it this way in his article: LTE and Roaming – Sybase 365 Leading the Charge: “Let’s face it, plumbing is not sexy.”

Plumbing is indeed, not sexy; however, for connecting LTE networks the “plumbing” such as the connectivity provided by IPX networks are very much required.  The primary reason to connect LTE networks via an IPX is to support subscribers roaming from one network to another.  LTE Roaming is well described in the GSMA document IR.88.

The use of the IPX as the inter-PLMN backbone is clearly defined in IR.88.  I leave it up to you to delve into IR.88, if you wish, as this provides very technically oriented guidelines regarding how LTE Roaming will work.  An IPX is recommended, as a single LTE network can theoretically reach many or all other compatible LTE networks via the single IPX connection.  Additionally, an IPX will support all of the necessary security and network performance requirements that are needed for LTE interconnection, as well as inter-working of a number of other functions.  As has been written many times before, an IPX may be used for a variety of services – LTE Roaming being one of them.

An Overview of LTE Roaming Architecture

Take a look at the GSMA IR.88 view of the LTE Roaming architecture in the diagram below. 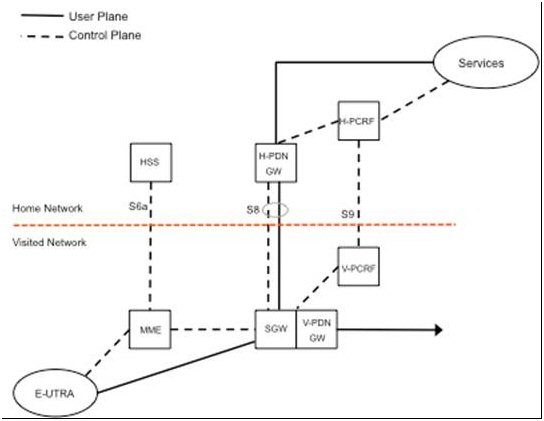 The “control plane” means signaling and control messages such as those using the Diameter protocol – especially across the S6a and S9 interfaces; connections between network elements have

interface IDs” and are designated by a letter/number/occasional letter combination.  This also differentiates between the network elements that are active on both the Home network (hPLMN) and Visited Network (vPLMN).  The “user plane” is the actual data – that is email, voice calls, web browsing, rich communications, app data – the actual user data.

As shown in the next diagram, which depicts a “local breakout” scenario, the LTE device connects to the E-UTRAN which is the technical name for the LTE Radio network, which passes along “control” messages to the local (in this case, visited) MME (or Mobility Management Entity, the core network element that is used for a variety of functions, including management of the initial attachment for the attached device). 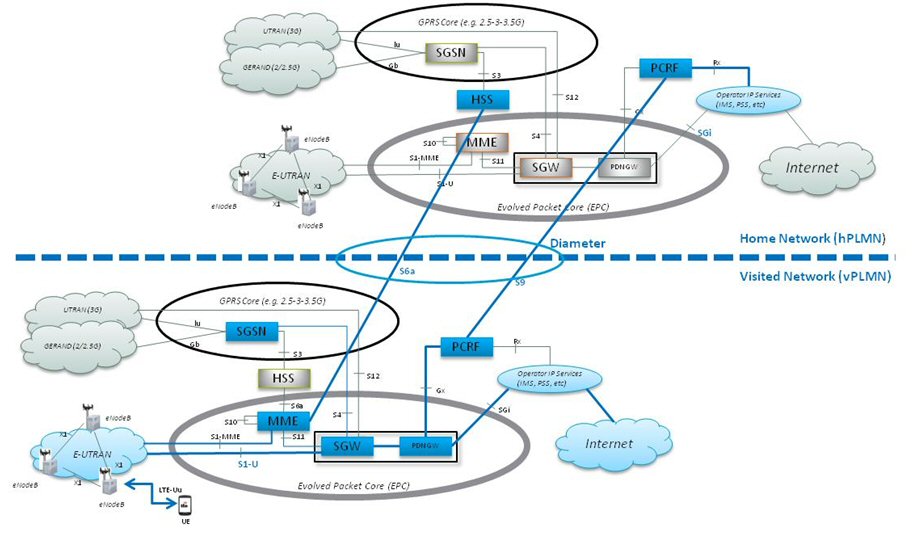 The MME then signals the Home HSS (Home Subscriber Server) via the S6a interface.  This request uses the Diameter protocol and the MME asks the home HSS about the subscriber that has connected to its network.  The HSS passed back to the MME information about the subscriber, including whether or not the subscriber is authorized for Local Breakout or Home routed traffic.

Local Breakout is a feature of LTE Roaming and enables the subscriber to reach IP services across the visited network’s   Packet Data Network (PDN).  For Home routed traffic, all “user data” is routed back to the Home Network (much like what happens in 3G networks, today).

In the next diagram, we have a view of Home Routed Traffic.  The Blue lines as well as the highlighted Network Elements outline the components that are involved.  I won’t go into details here; however, note the S6a interface point uses Diameter, while S8 is used for GPRS Tunneling Protocol (GTP) in most cases to reach the Home network. 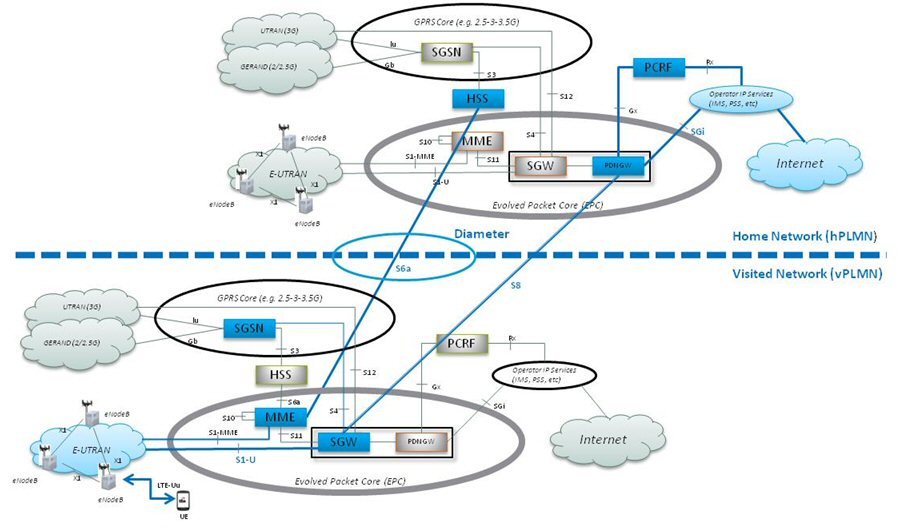 Basic LTE Roaming call flows and architectural diagrams are rather complex stuff, but the point is to illustrate the importance of the amount “plumbing” necessary to achieve Quality of Service for LTE subscribers.  The IPX makes this seamless connectivity possible so that there is virtually no difference to the subscriber between services and quality of service while roaming vs. being in the home network.  This becomes especially important when some of those services include Voice over LTE (or VoLTE).  With services such as voice and video calling, the IP latency and jitter must be extremely low from end to end. Certainly the LTE (E-UTRAN) radio network will provide low-latency and high bandwidth between the device and the towers, but operators must also require QoS solutions for backhaul (the network connecting all of the cell-site locations together), as well as within the Evolved Packet Core (or EPC) and finally between networks (the IPX).

To further complicate matters, LTE Roaming must also support the concept of 3G fallback. This usually occurs when the visited network does not support LTE or does, but at incompatible frequencies.  In that case, the device will connect to the UTRAN (3G radio network), if it supports such frequency bands (and most LTE devices support both 3G and LTE frequency bands).    Details around 3G Fallback are not discussed here; however, if you are interested, there are either 3GPP and GSM standards documents that can provide the whatever level of detail you need.  Some of the architectural elements needed for 3G fallback (especially when one or both networks also support LTE) are shown in the LTE Roaming diagrams.

So as you can see from this viewpoint, there is significant amount of data exchanged in order to enable subscribers to roam from one network to another.  Furthermore, to provide and retain the QoS that the subscriber expects, there is no viable alternative other than the IPX infrastructure as the fabric to enable the roaming scenarios where subscribers will be expecting the same level of service as they would have in their home networks.

So, as you can see, it IS all about the plumbing.