In the BEx to BOBJ migration projects you will come across many limitations and functionality that cannot be passed to BOBJ. This blog will give you step by step solution on one of the limitation in WEBi XI 3.1.

When the AS-IS query (ZTEST_MAINQUERY) is ran the variable “ZVARA” also comes as pop up.

The Replacement Path Query/Pre Query runs and the output of the report becomes the input to the AS-IS Query.

When the query is made available for OLAP (Tick the property: Allow external access for the query) we get the below error while running the Replacement path query which has the ready for input variable.

Cannot run a report that contains replacement path with prompt

Below solution can be used if the Pre Query is built on Master data or DSO as it would be easy to read the Master data and DSO tables.

2)     2) Dummy Key figure will be restricted by the variable ZVARA. This variable will be similar to the one present in the Replacement Path query.

Not Ready for Input

ABAP CODE is given at the end of the blog.

7)     7)Enter the prompt values and run the report. The ABAP code will be executed and restrict the ZTEST_MAINQUERY with the same employee as the ZTEST_PREQUERY would have restricted.

It would be a difficult task to read the Cube, Multi provider or Info set data by writing the ABAP code for customer Exit variable.

Pre Query: ZTEST_PREQUERY is on cube.

In this solution we will use the Pre query along with the main query.

1)     1) Replacement path variable will be removed from the main query (ZTEST_MAINQUERY) and no changes will be done to the Pre Query (ZTEST_PREQUERY).

2)     2) Create the Universe on both the queries (ZTEST_MAINQUERY and ZTEST_PREQUERY) and make the copy of the Detail Object (Example: Employee Key on which the replacement path variable was created in the Main Query) and save it as the dimension. 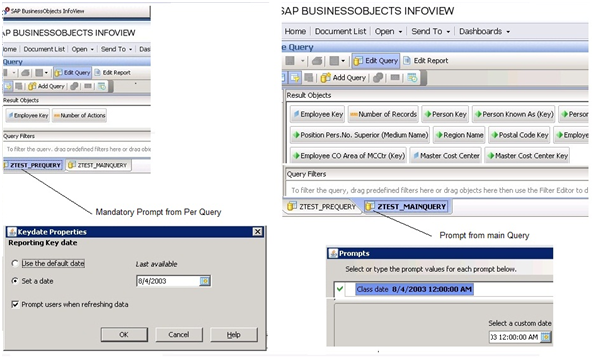 6)     5) Create a merge dimension by using the Employee Key dimension created in the universe.

7)     6) Drag the Employee key from the Pre Query and all the required fields from the Main Query. This works similar to right/left outer join in RDBMS i.e. the data will come for all the employees from the replacement path query. 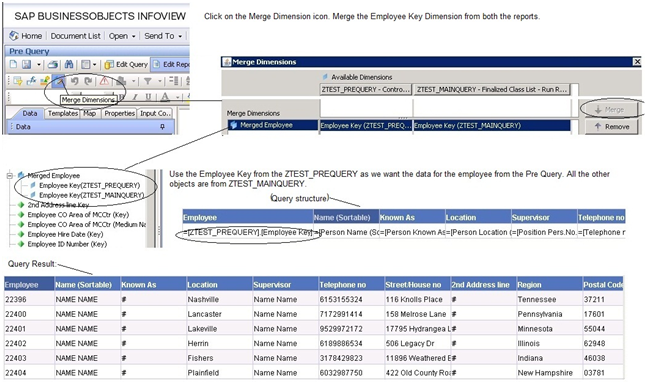 8)    7) Ran the report and the prompts will come for both the queries and the data will be displayed for the Employees from Pre query only.

I would publish few more BLOGs on the BOBJ WEBi tool limitations and the solution/workaround for the same.

Look out for the my blogs 🙂