Andrei Vishnevsky – SCN Member of the Month May 2012 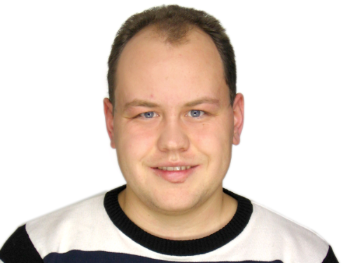 I started noticing Andrei Vishnevsky when the new SCN launched in March. He was very present – discussing the new site, reporting bugs and asking good questions. With a little bit of research, I found out hat he is one of the Top Participants in the CRM space and I was very happy to learn that our Moderators were recommending him as Member of the Month for his active participation in the CRM area, his faithful support (almost on a daily basis!) and his ability to explain difficult concepts with simple words.

When I talked with Andrei last week, it became clear to me that he is a fast learner and should be an inspiration to us all. Here is what we spoke about, from his love of travels to his passion about learning and meeting SAP professionals who are his inspirations and motivate him to share his knowledge.

Can you tell us a bit about yourself, where you live, who you work for, and other things you would like to share with the community (hobbies, fun facts)?

I was born and raised in Minsk, Belarus and I still live there. Did you know that it’s considered the very center of Europe? At least geographically.

I’d say that my career in IT started 8 years ago when I began studying Microsoft BizTalk Server 2004. I then turned to SAP and joined a great team at AtlantConsult, following the advice of my brother (he was working for an SAP customer at the time). It’s been 7 years already. At first I was a junior within Sales and Distribution module and then I became a senior certified SAP consultant. I’ve been involved in many projects around SAP SD (Sales and Distribution) and LE (Logistic Execution). All people and situations on the way made me better and stronger (“That which does not kill us makes us stronger”). In 2010 I had a chance to switch to SAP CRM practice. And I never regretted the decision. I really enjoy it.

Beside work (which takes too much) I like to play and watch soccer. I also love sightseeing and traveling. I prefer to visit interesting places instead of lying on the beach all day long. But most of my free time is spent with my beloved family: my wife and my little daughter.

Note from Laure: Andrei’s daughter is 2.5 years old and a real cutie, from what I’ve seen online!

I found you on Twitter (@VishnAndr) and I am now a follower, but your tweets are a bit cryptic to me. For instance this one and that one 😉 But at least I understand this tweet! Can you share a bit about your engagement on Twitter?

Oh, that is Russian! First one was actually about SAP: The announcement of the first SAP Forum in Minsk that took place in March 2012. And the last tweet is the first real snow of last winter, you’re right. OK, I got your point 😉 Promise to tweet in English too. In general I’m more a reader than a writer in social networks. This is probably due to lack of time. By the way, there are things I’d like to share on SCN and I hope to do it soon.

My profile says that I’m a member since April 2007 but this is the date I got an S-user ID. I came to SCN much later actually. When I started here, I was eager to gain knowledge from my more experienced colleagues and understand how the system works in general. To tell the truth, when I was going through the most difficult days at the  beginning of my SAP career I thought: What is in this black box called SAP? How does it work? Will I ever understand its logic? I have really extraordinary teammates who taught me a lot. But I’ve also wondered what is going on in the SAP world. So I came to SCN and stayed here. It’s only after attending a BCM (Business Communications Management) training that I realized I knew some stuff and I should share it on SCN.

It helps me to solve many issues and get answers to many questions when I’m in doubt. For instance, before raising an OSS note I search through SCN for the same. And in most cases I find the solution here. There are many examples when my teammates or I face a question, an issue or simply a new scenario and I say ‘Hey! Stop for a sec! I’ve seen something similar on SCN recently!’

What do you like most about the community in general?

The SCN Team has noticed how involved you are with the new site, from reporting bugs to asking questions to the team and reporting abuse. What motivates you to do that? And do you consider yourself a “bug reporter”?

I want to help make the new site as it should be. I visit SCN almost every day. It’s like a cup of coffee. Everybody likes to drink only good coffee. With the right amount of sugar and milk. I just help to prepare the cup. I won’t consider myself as a “bug reporter”. As with all major projects like this one, the SCN team has much to do and the list will never end. But helping them to organize something and give more information to other members through contributions and discussions is one of my priorities on SCN.

I spend most of the time in the CRM spaces due to my current projects and my personal interests, and I also keep an eye on SD subspace of ERP space for historical reasons. I like to read contributions related to new SAP products and interesting techniques too.

Your most recent  status update on SCN says that you just started on a new project and that you are excited about it. Can you tell us more about it?

There is a new SAP CRM project with an SAP ERP integration at one of the largest financial organization of the region. I will be working on it as a CRM consultant. Also, I will probably act as a project manager for this important project.

Be involved. Try to contribute valuable content. Participate in discussions. Share your knowledge. Ideally, check what you contribute before you post. Help others wherever you can. Never stop studying and learning. Try to respect your readers and colleagues. Always keep in mind that tomorrow you’ll read their posts, e.g. you will be their readers. Be involved.

Note from Laure: Maybe I should have asked Andrei to make it more explicit. Did he mean ‘Search before you post’? 😉 More seriously: What I really like in this answer is “Respect your readers and colleagues, you will read their posts tomorrow”. So true. And it’s the same for beginners on SCN: who knows who will become a thought leader that you will later rely on for quality information? Help your fellow members and build a healthy, friendly relationship with them.

I’ve never used Mac, even on my smartphone it’s Android. So the answer is Windows. But I’d like to try Mac. And understand or at least try to understand what is so special about it.

Note from Laure: I tried to convert Andrei to Mac and gave him a pitch that I hope was convincing enough and motivated him to visit an Apple Store soon and report to me about the experience.

There are a lot of decent members on SCN. I’d like to mention people who directly or indirectly helped me to become who I am and continuing to help. It is certainly all my teammates and colleagues and:

John Burton (I’ll never forget this video):  John is an SAP employee and CRM guru. He’s published books with SAP Press and I admire his knowledge and support. I think he’s less active on SCN at the moment, probably because of more responsibilities in his daily work.

Gregor Wolf : A Mentor who is active in the SCM space. He teaches a lot, and well.

Tomi Halmela: Tomi works as an SAP BCM consultant at SAP Labs in Finland. I met him a year ago in Moscow and then at SAP in Finland during a training. He helped me a lot: thanks to him I managed to implement SAP BCM within a few weeks and the customer was very happy.

Shuki Idan: Shuki works at SAP Labs Israel and he is a very good speaker who knows how to share his knowledge and communicate with people. If you want to find out about SAP RTOM (real-time offering management solution – fairly new project), he’s the man.

And everybody who is involved on SCN. — It takes a lot to contribute a lot (time to share)

Every month, a member of the SAP Community Network is recognized for exemplary behavior: sharing knowledge with peers, being helpful and taking on additional tasks to support community engagement. See the list of previous SCN Members of the Month

Nice to know you Andrei. Thanks for your efforts and contribution to the community!

All the very best wishes to you..

@Andrei thanks for your wonderful community spirit and support! Congratulations on being a MoM!

Congratulations Andrei! Great to get to know an SCN member  from this part of the world too.

I think it's very impressive that you are so active in the CRM space after only coming to this product in 2010. It goes to prove that nothing is impossible with your attitude of "Never stop studying and learning".

Your ability to quickly grasp and apply new concepts is amazing and your willingness to share is truly admirable.

All the best to you,

Congratulations Andrei! Also, best of wishes in your new project! 🙂

Thanks and kind regards,

Good to know about you that,You are into CRM..

I have few points to get clarified about CRM. Ill message you.. I'll be following you from now 😆

Thank you everybody for congrats and great support! It was really amazing month for me. And I'm glad that it started with the news from Laure.

I think being a MoM on SCN is not just for a month. It's for much, much longer. I'll do my best to help the community in all the way I can.