Hello! My name is Ivy Cheung and I am a co-op student working in a 8-month term at the Vancouver office. I am in the Computer System Technology program at BCIT. I am with the Global Technology Legal Compliance team and working here has been quite interesting! So when I heard about Inside Track, I took it as a chance to go beyond my desk and volunteered as a blogger for this event. I also have a blog here where I sometimes talk about random things and post random pictures.

The SAP Vancouver Inside Track kicked off just after 9am as attendees mingled with each other before the opening. Jason Cao, Kirsten Sutton and Jason English all welcomed the participants and took the chance to highlight what would be on the agenda.

Staff and participants used the hashtag #SITVAN to tweet about today’s event. On the feed, you can find tweeters sending tweets with regards to the panels, along with photos taken at the event.

The Ice Breaker took the form of ‘Getting to Know You’ bingo. Attendees walked around asking each other items on the sheet such as one who can play a musical instrument or one who owns a pet. Winners received a T-Shirt as a prize too! 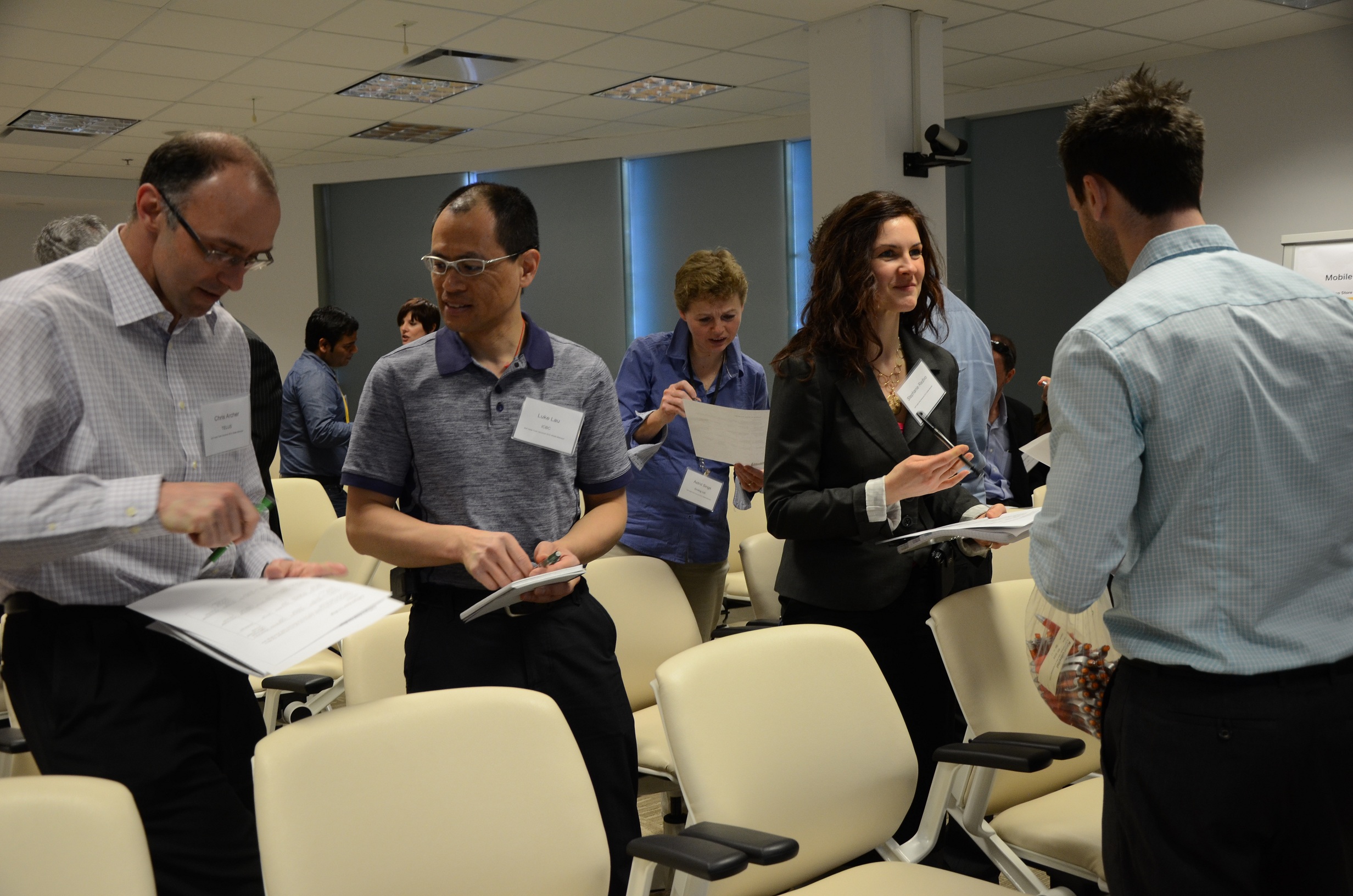 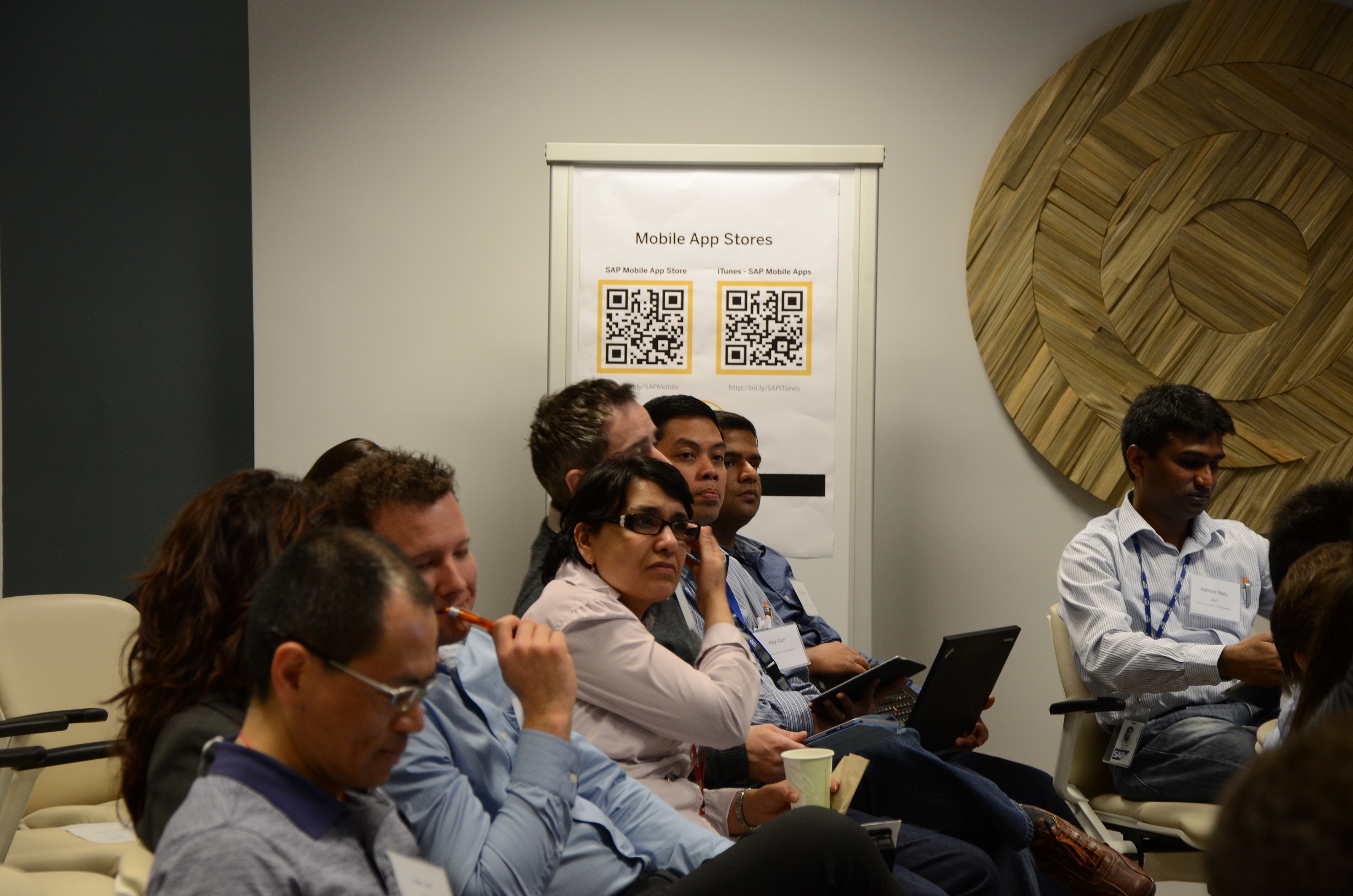 SAP’s Mobility Strategy and Direction – Sybase SAP
Mike Peck started off the session with a history of the mobile phone and how it has evolved over the years and changing faster than ever. The focus on this session is SAP’s mobility strategy at the current state and heading into the future.

Scott Dillon introduced a new way to using apps on your mobile phone, especially in a business setting. Slowly businesses are incorporating the mobile setting into their everyday operations, albeit hesitant and adapting slower than normal users. With that said, many are saying that mobility is definitely a big part of their future and SAP has “drank its own champagne” with mobility and taken a big step forward in innovation in that area with the acquisition of Sybase. You can tell by the number of SAP apps are available on the Apple App Store!

Currently, most of the apps we have on our phones are directly downloaded from the Apple App Store or Google Play. This becomes a hassle when you want to have employees download multiple apps onto their phone along with multiple updates per app. Scott demo-ed the Sybase Workflow 2.1 app from the Apple App Store. You download the app – which is really a container – from the App Store and from there the host can push apps to the users. With this, you don’t need go through the certification process again from Apple for an update. You can also push different apps to the app container without the user downloading all of them. The top few who participated received t-shirts too! Sadly, I couldn’t get the settings correct so I didn’t get a chance to see this happening on my phone. 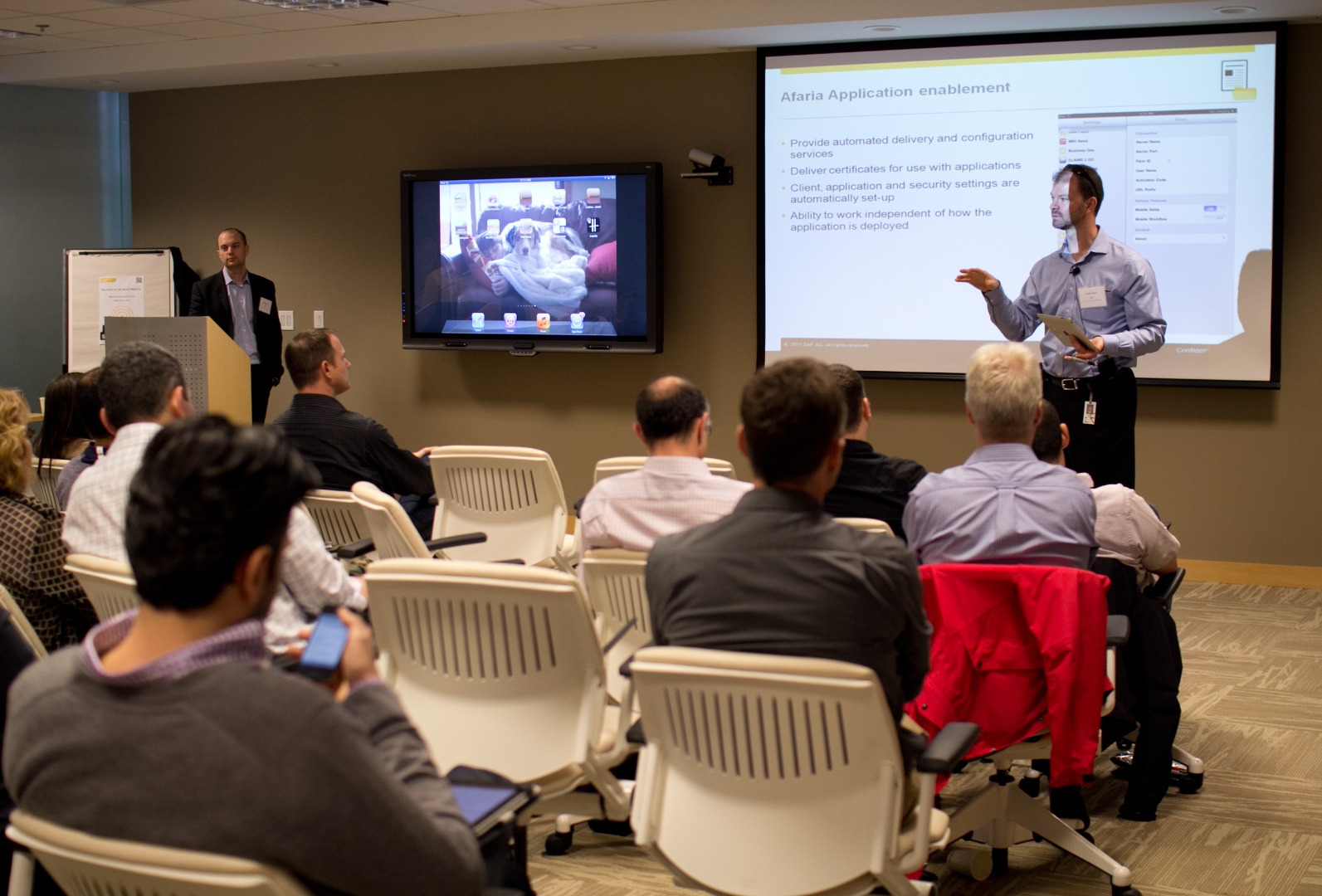 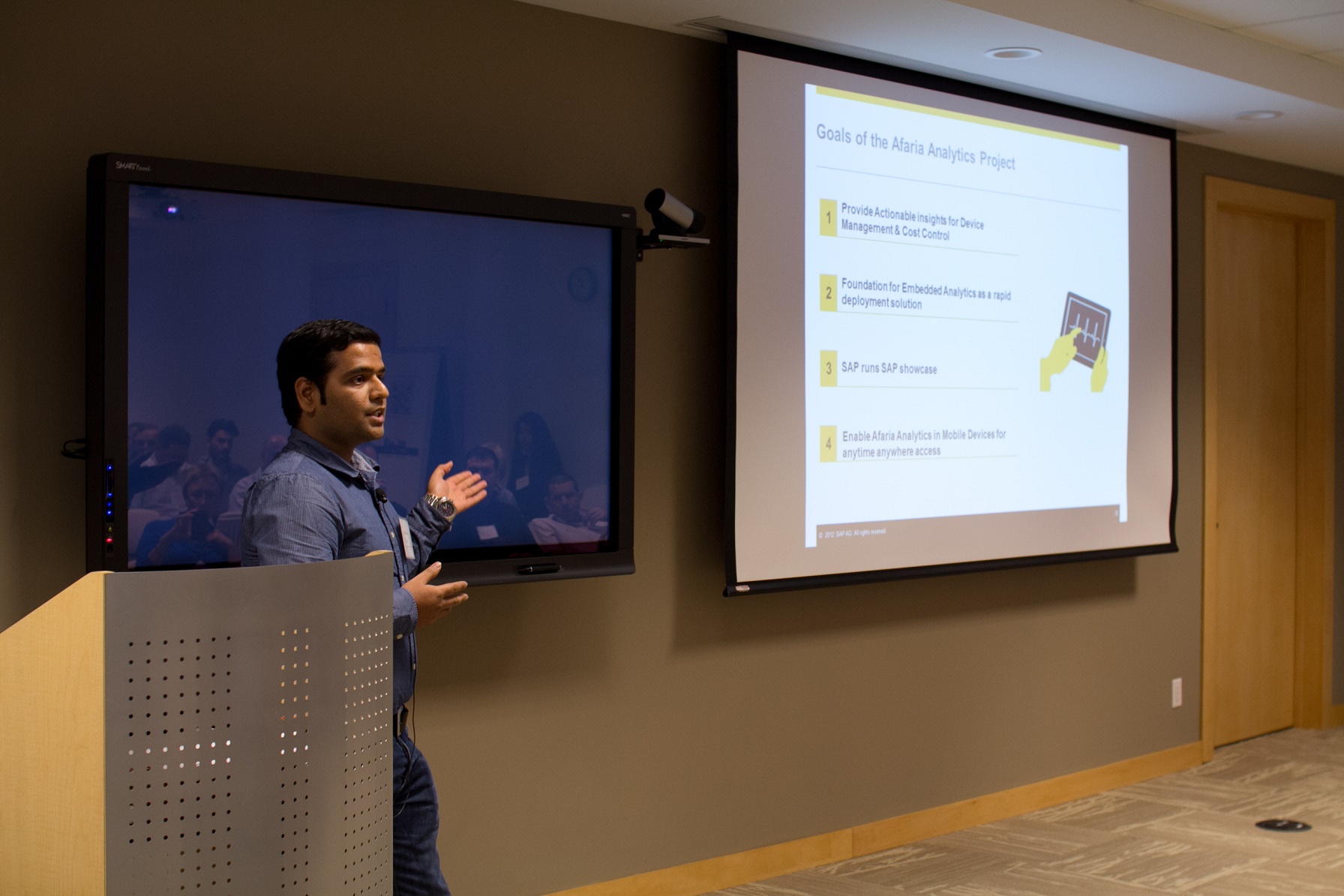 Ryan Gerrard, from SAP’s IT Team, began with an introduction of the mobility trends in a corporate setting and employees using their own phones or company phones and mobile apps. SAP adopted the mobile technology early on and with its sound mobile strategy, the number of mobile devices in the company reached 40,000 recently – either through company mobile or BYOD (Bring Your Own Device).

Afaria is a Sybase product with device management capability – available for iOS, Blackberry and Android. It has the four focuses: Devices, Activity, Application, Compliance. In the business world, it is important to protect data from outsiders or even your family members if you want to take your device home.

The new Business Model in the mobility world is Big Data, Cloud, and Consumerization.

Rey Atun continued with the presentation with how mobility can help the workplace, especially with BI Tools on the go. Dylan Hoare demo-ed a SAP BI Analytics app for the iPad and showed how Afaria can help with locking down business information even though he takes his device home so his daughter can use it without getting into the work apps.

While on-the-go mobility is great for the business, there are obvious issues that must be dealt with in the near future: support, security and cost impact, such as roaming internationally. For example, Apple and Android costs are much higher than Blackberry in International roaming. Personally, I turn off my data once I go outside of Canada, especially I have to pay out of my own pocket!

In conclusion, the future of mobility is endless as this form of technology will soon to be the new desktop. There are still ways to go with issues such as missing keyboards and printing issues, but mobility (whether through mobile phones or tablets) delivers quick information and facts along with access to the internet and email at anywhere and at any time. After I finally got an iPhone, I see myself way too attached to my phone and I don’t use it for business. On the other hand, the last time my phone ran out of batteries and I was stuck on the train at the same time, my mind was racing just to think of a way to recharge my phone. 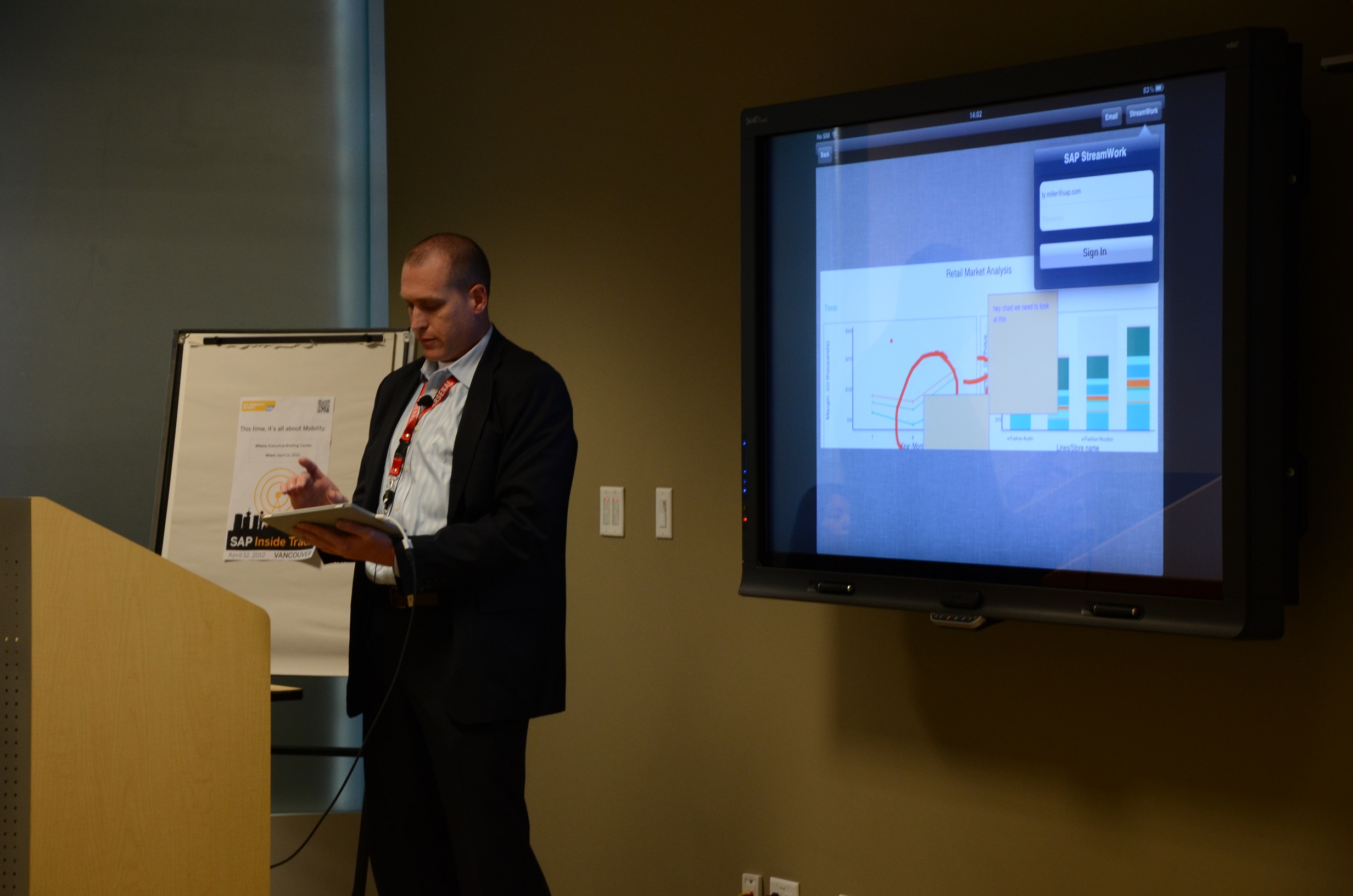 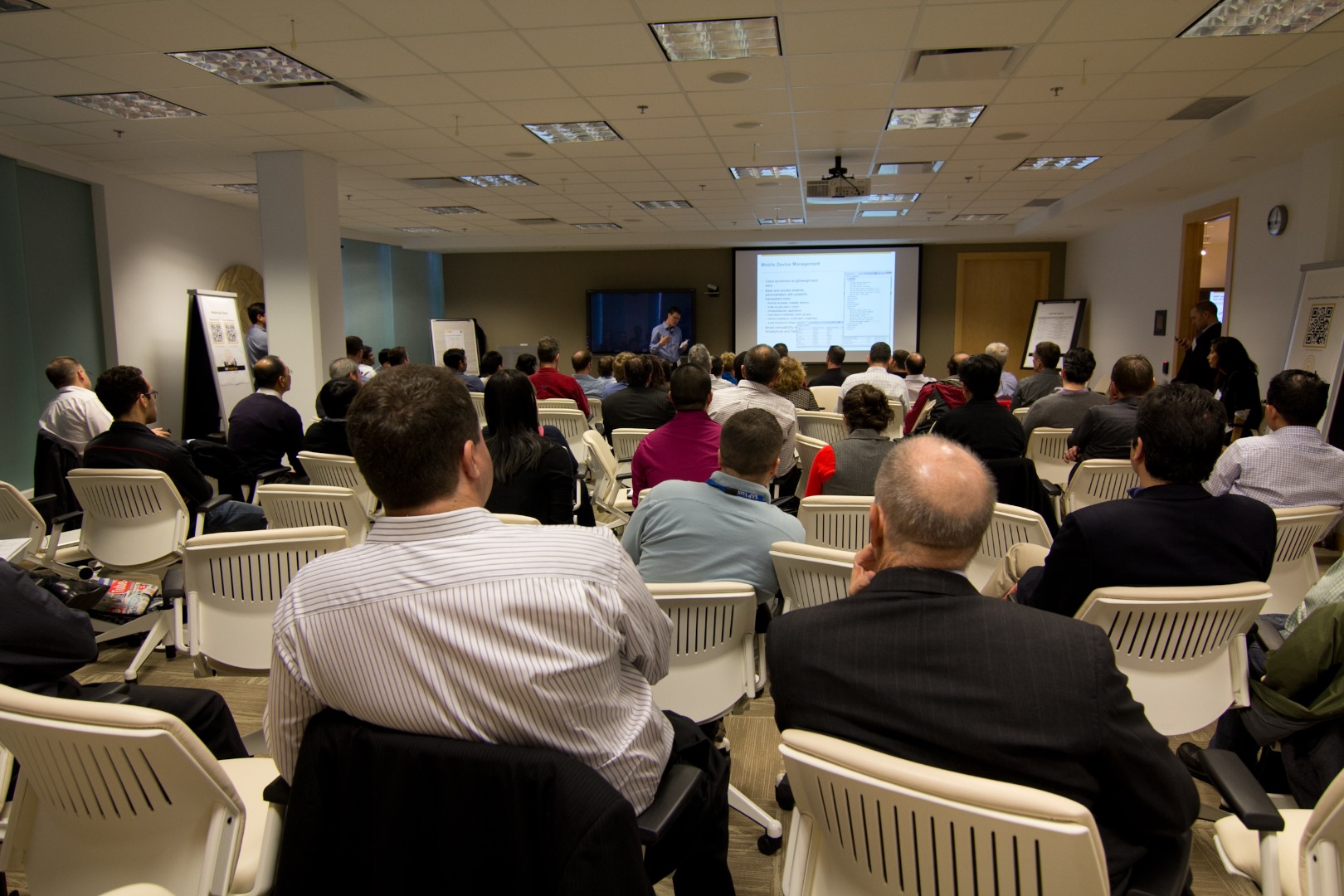 Run Smarter Anywhere with SAP Mobile BI
Ty Miller kicked off his presentation with emphasizing the importance of mobility – as seen in the Egypt revolution especially though social media.

SAP continues to develop Mobile BI apps for Crystal Reports and Web Intelligence reporting. With the merging of HTML5 Xcelsius Dashboards for the iPad, it becomes easier to get real time data and make decisions on the spot, rather than waiting for data to come in, generate a report, then decipher the reports.

The future of SAP Mobile BI is based on value (showing important information on-the-go through these apps) and new capabilities (such as geo-location). 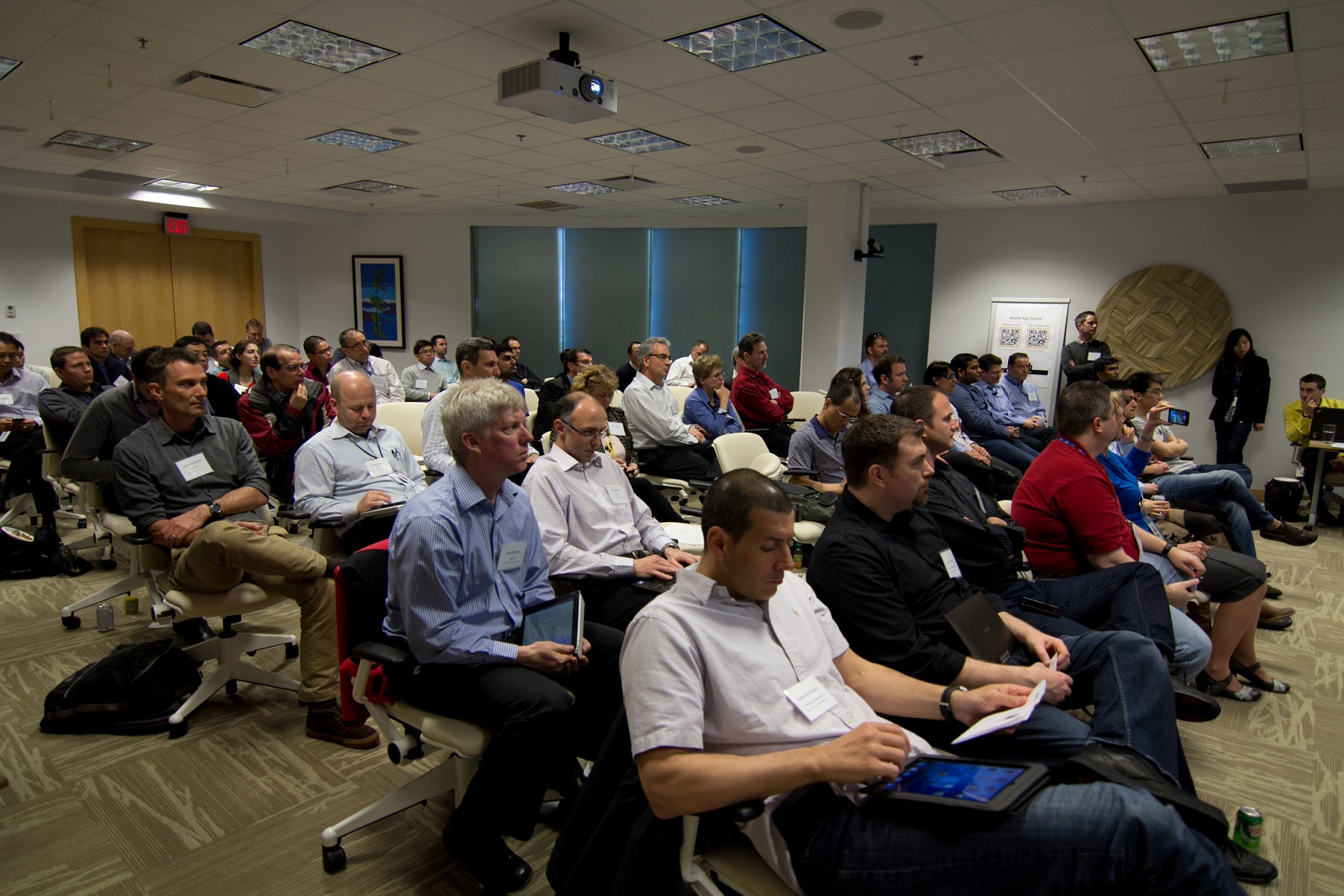 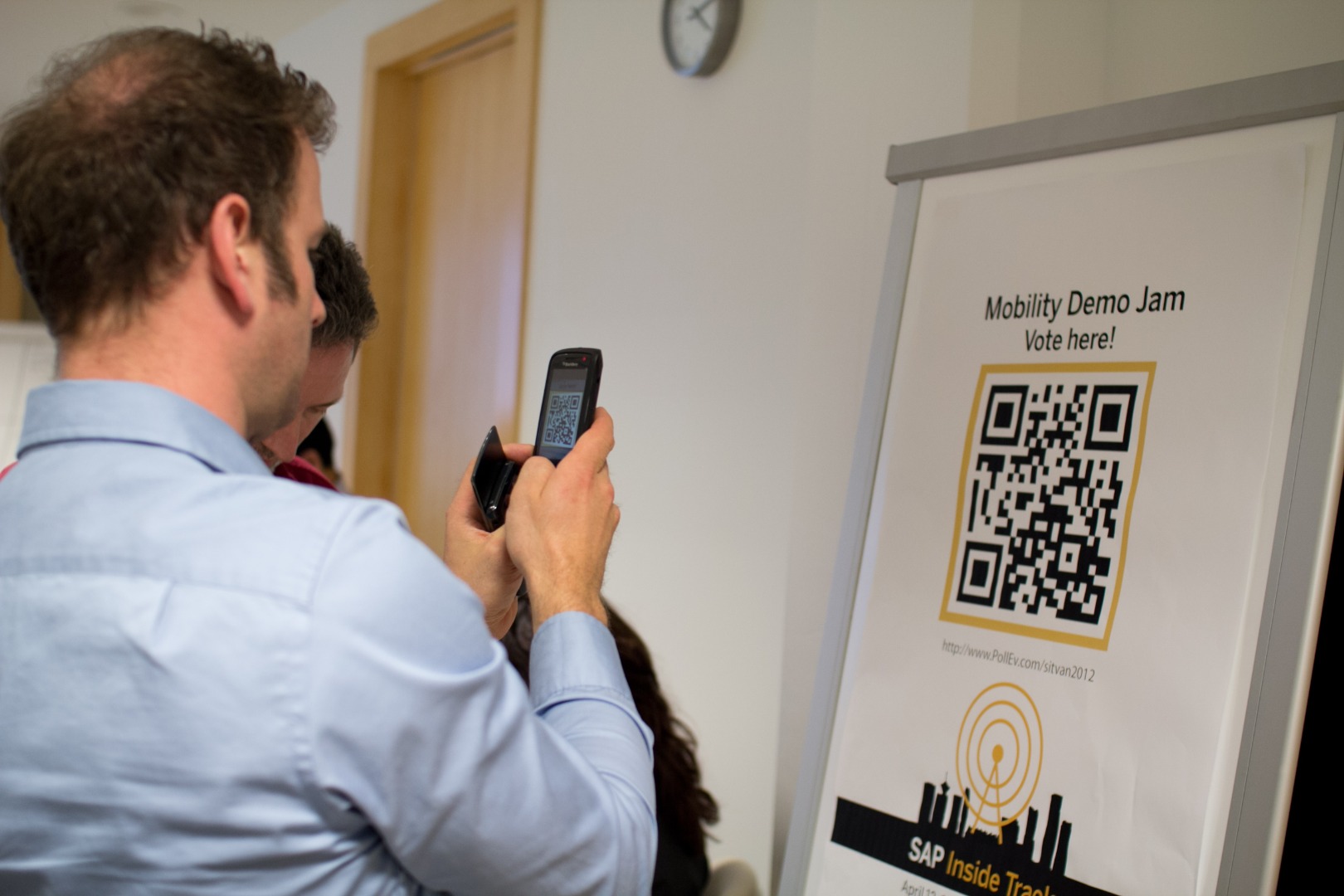 Mobilizing Reports and Analytics – Research In Motion
Leo McDermott and Ed Bourne from Research in Motion was up next!

With tablet use in the business place on the rise, there are several key factors to keep in mind when creating BI applications: Online access, offline access, multitasking, security, application management, and deployment.

As many users switch from desktops and laptops to tablets, it is important to keep in mind the changes in between the two platforms such as widescreen and precision. For example, it is easier to just display the tabs outright rather than using dials and drop-down menus since you have to account for the user’s fingers along with multiple on-lookers of the tablets (finger covering the screen) or a mouse icon that covers the actual screen during presentations.

Ed Bourne showed off the capability of using a Blackberry as a remote control for the Playbook during his presentation – neat!

RIM will make Blackberry Playbook Dashboard Components available for free download on SCN in a few weeks. So definitely keep an eye out for that! 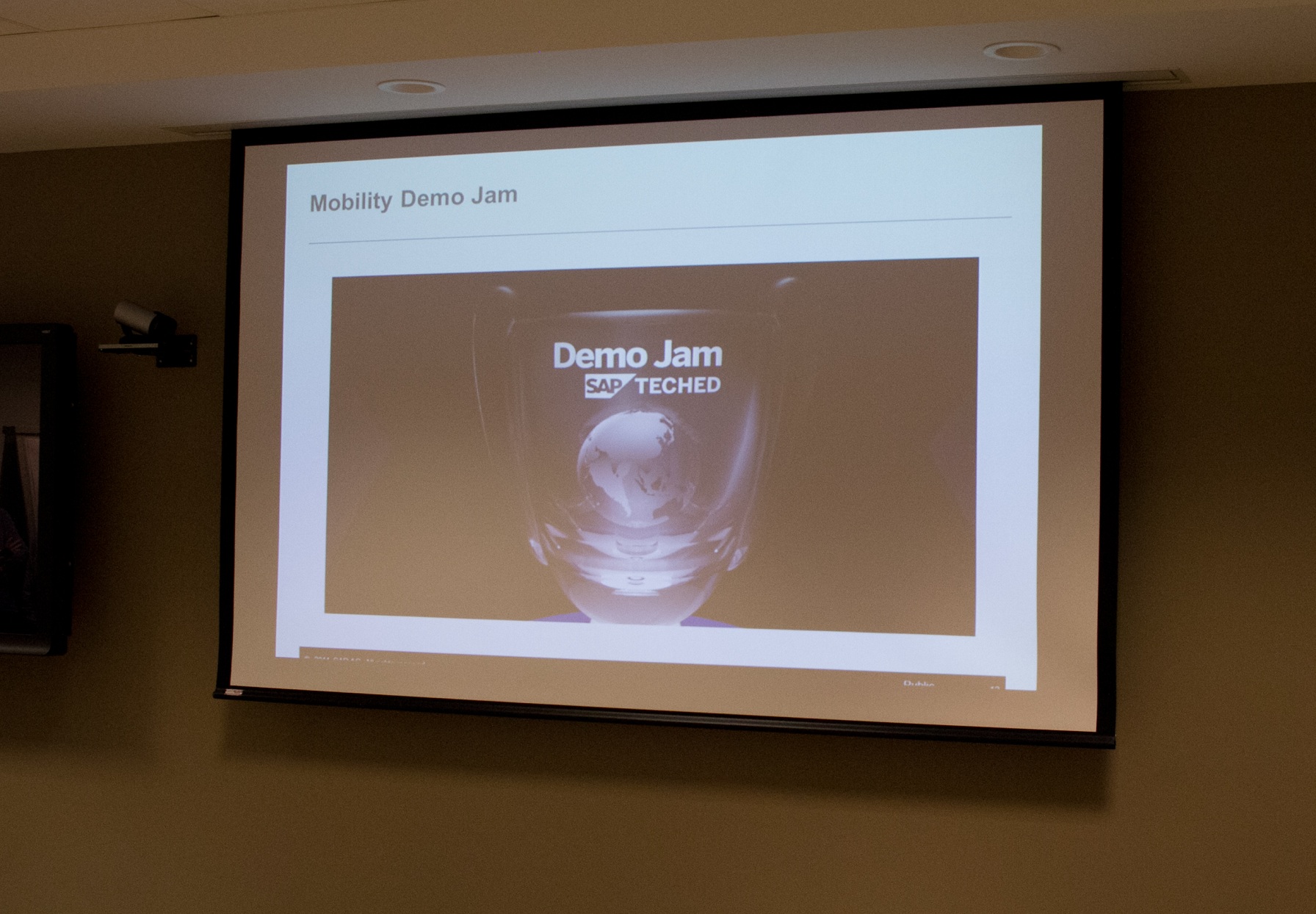 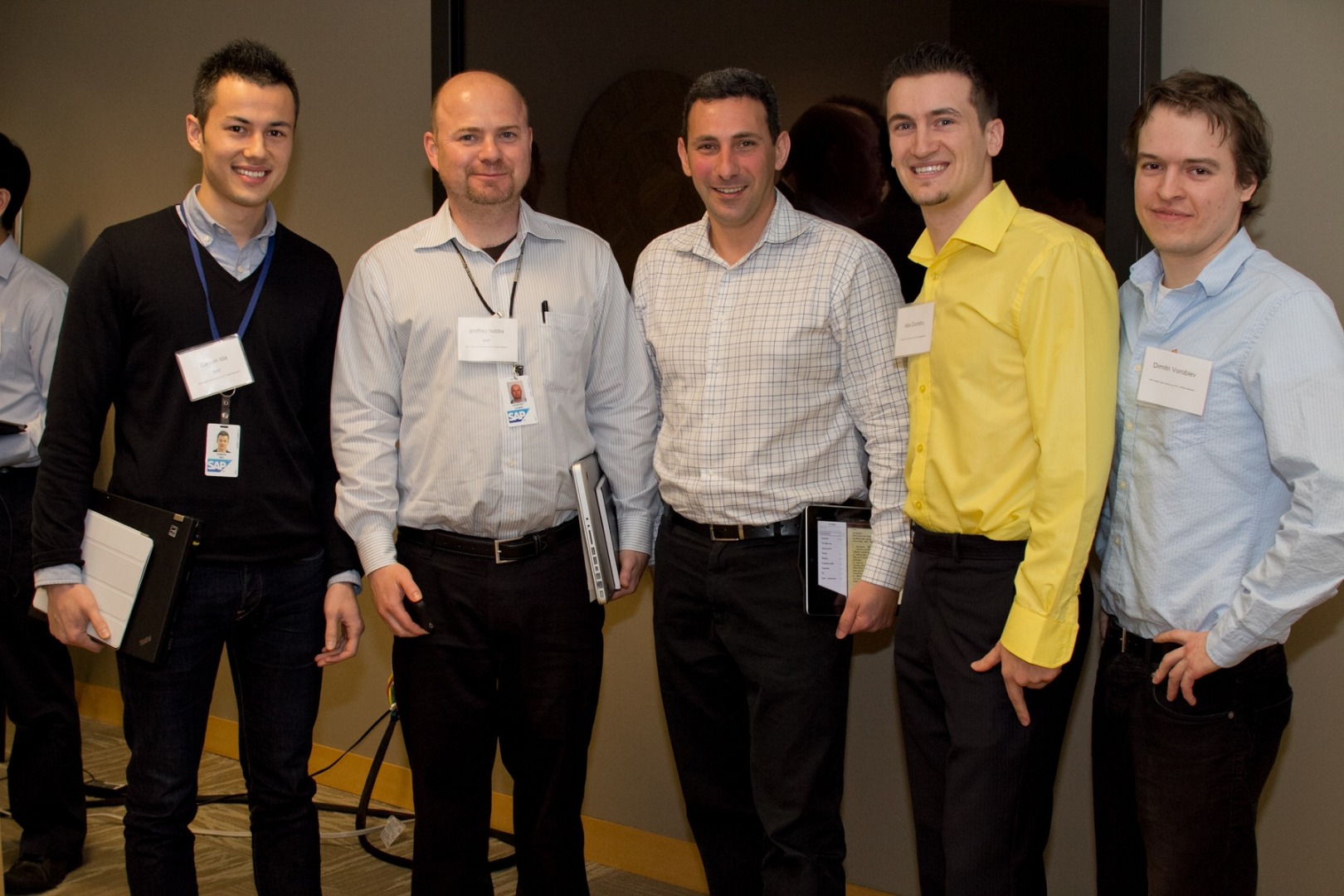 For the Demo Jam, we had four contestants showing off their app. The winner would receive a Blackberry Playbook courtesy of RIM!

After collecting the votes through mobile voting (QR codes!) – the winner is Dimitri Vorobiev! He wins a Blackberry Playbook! 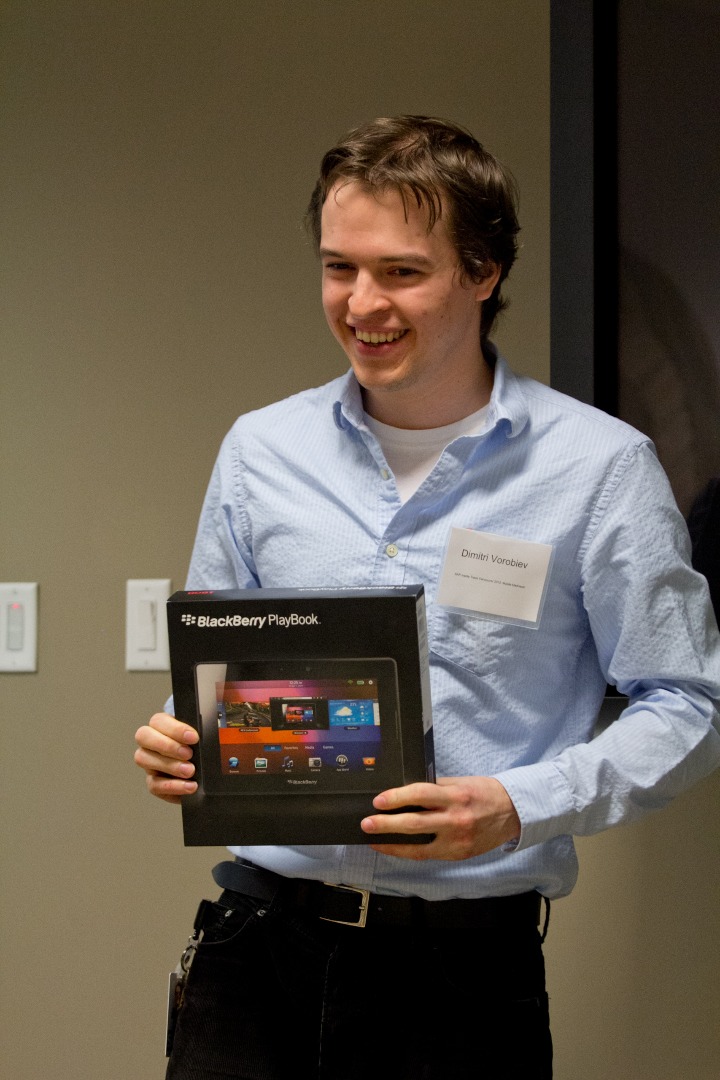 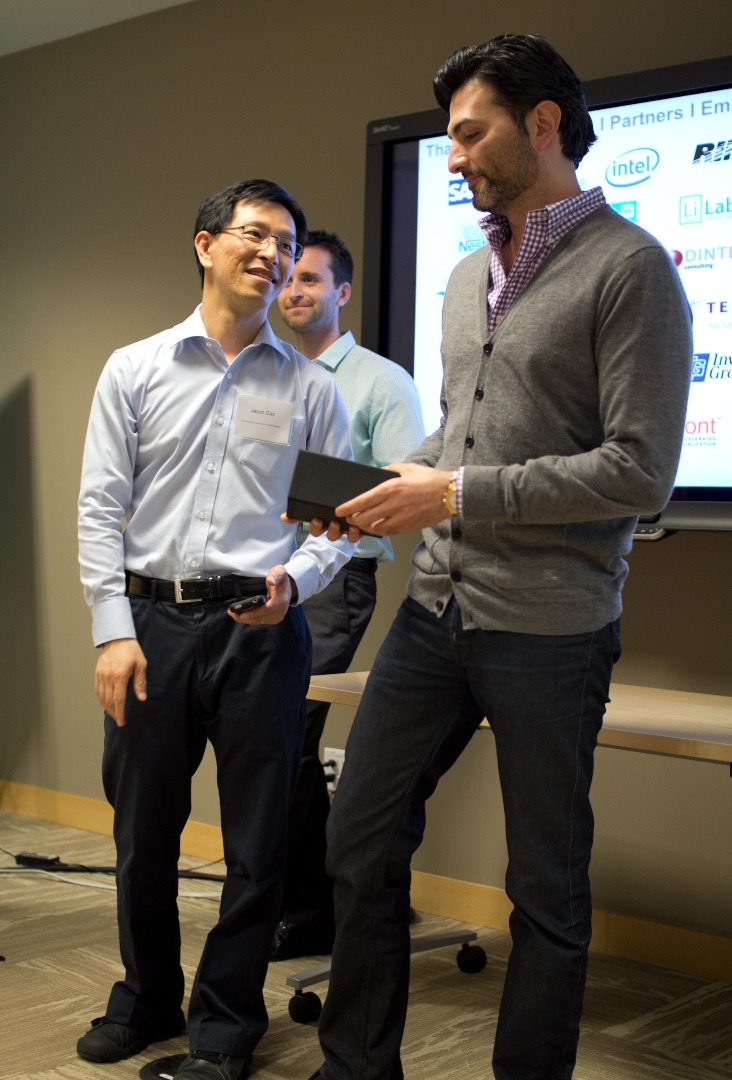 Inside Track Vancouver 2012 wasn’t over yet! Door prizes, thanks to our IT team, of various items such as iPad cases, car chargers, etc. The grand prize of today’s event was a Blackberry phone courtesy of RIM. (Personally I won an iPad case even though I don’t have a tablet.) Rosalyn Tam addressed the audience and thanked all the sponsors, staff, and volunteers. We wouldn’t be able to run this event without everyone of them!

We have a photo group on Flickr along with video recordings of the sessions too. Photos courtesy of Anita Yuen and Loren Ha. Much thanks!

Good luck to SAP Inside Track Vancouver 2013 (or maybe sooner?)!