Last week, there was a press conference in San Francisco where SAP made major announcements in the database and mobile space.  The statements regarding the mobile space were fascinating inasmuch as it demonstrated SAP’s strategy to use partnerships to expand its reach into new developer ecosystems.

By collaborating with Adobe, Appcelerator and Sencha, SAP will enable millions of developers to effectively build mobile apps based on their choice of client architectures — from native to hybrid Web container to mobile Web. Developers will be able to do so while leveraging an industry-leading enterprise mobile application platform from SAP.

“As a leader in the enterprise mobility market, SAP is constantly looking for innovative ways to serve our customers and partners, and advance our vision for this market,” said Sanjay Poonen, president, Global Solutions, SAP. “By joining forces with leading mobile app development vendors like Adobe, Appcelerator and Sencha, we are making it easier for large communities of developers, in the millions, to innovate on our platform. We believe SAP is the only mobile platform provider delivering on the promise of an open platform architecture that supports innovative third-party development environments and tools, providing flexibility for customers to implement the right mobile app every time.”

This approach was, however, focused on the mobile space.  Since I am interested in the OnDemand space, I started to think about SAP’s OnDemand developer ecosystem.   The “cloud” is a critical cornerstone (along with mobile, in-memory and core/ Business Suite) in SAP’s fundamental strategy. I was curious – Was the same strategy (use partnerships to attract new developers, etc) present there as well? What role did the acquisition of SuccessFactors (with all its cloud DNA) fit into this puzzle?

Note: It is critical to make distinction between SAP’s OnPremise and OnDemand developer ecosystems. This blog just focuses on the OnDemand ecosystem.

SAP has a variety of OnDemand solutions available  and a few offerings (for example, Neo) which are still in Beta.   Almost all of these offerings are SaaS and the involved applications were largely created by SAP.  Some have SDKs (ByDesign), others (StreamWork, BIOnDemand) have REST APIs that are available for developers to extend these applications.. The majority are an integral part of the SAP’s OnDemand architecture – there are a few (SAP Information Interchange OnDemand, E-Invoicing for Compliance OnDemand and Sourcing OnDemand) however, which have a strange position in that they are described as being “OnDemand” but currently don’t run on the ABAP or Java PaaS platforms.

Here is an overview of SAP’s Cloud offerings that was presented at last year’s Influencer Summit in Boston. It is useful as a reference for the following discussion. 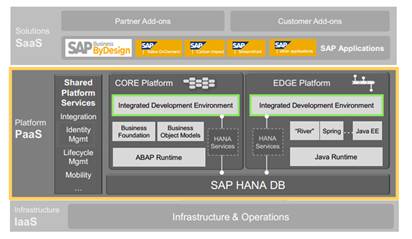 After I decided to analyze SAP’s OnDemand developer ecosystem, the first question was: “Where do I start looking?”  Since we are talking about developers, SCN appeared to be the logical choice.  I purposely avoided any private communities for such developers.

Note: Some might say that the new SCN has just been launched and the appropriate content might not yet be present.  I’d respond by saying that the problem existed in the old SDN as well.

The next question was “how do you determine whether a developer ecosystem for a particular product line is present?”  I decided to look at the resources that are available. “Resources” is defined broadly and includes such things as forums, blogs, code examples, sandboxes to test the platform, etc.

The next question was “how do you determine whether a developer ecosystem is healthy and vibrant?” This characteristic is based on the assumption that the ecosystem is present in the first place. Some metrics used to answer this question might include the level of activity in forums, number of blogs, number of blogs written by non-SAP developers, etc. Other more subjective factors might include developer-friendly licensing, etc.

I’m dividing my analysis into SAP’s SaaS and its PaaS offerings.

Note: I’m only examining the actual situation for developers.  There might be lots of plans for OnDemand applications (Sales OnDemand SDK, etc) that are still in progress.

Note: The following lists are based on my extensive research on SCN. If there are other sources, then this is another example of the misguided strategy regarding the OnDemand developer ecosystem.  For example, I started looking at the forum for Business ByDesign but I noticed that there was very little activity.  After doing some digging and asking on Twitter, I discovered that there is a whole different community set up for ByDesign developers – separate from the open environment of SCN. 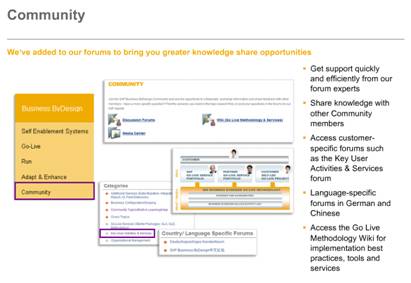 If other relevant resources that I haven’t mentioned are indeed present, then the question must be asked: how will the casual developer who is interested in the platform/application in question find the information? Such individuals won’t look as extensively as I have.

Other Resources for Developers

Note: There are currently no real PaaS offerings from SAP. I’m including River, because it is more a PaaS than a SaaS. However, its future position is largely unknown.

There is a new Developer Center page on SCN in which developers have the ability to get details about new technology.   Not only do developers get access to information, they also get hands-on access to the technology – either via cloud-based sandboxes or other means. 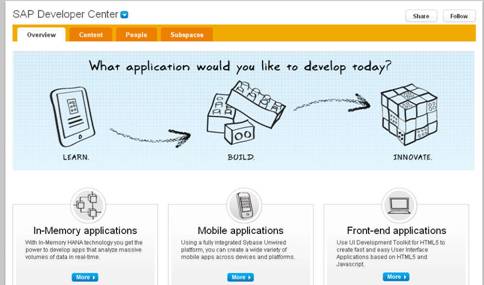 As the picture shows, there is nothing for developers interested in OnDemand offerings.

All in all, there are very few resources available for OnDemand developers. This scarcity is not the sign of a healthy developer ecosystem.  Some might suggest that this paucity is due to the relative immaturity of SAP’s OnDemand offerings (I don’t whether to see this as an insult or not) but this suggestion is more an excuse as anything else.