This story is inspired from a concept borrowed from the great Seth Godin. Most organisations spend their time marketing to the crowd, while smart organisations assemble a Tribe.

My first experience with SAP software began in 1989, when I was responsible for installing a 4.3B R/2 system on an MVS mainframe. Being the only SAP Customer outside Europe using CICS/IMS, I spent many hours reading through German comments in JCL desks and Assembler code to build my knowledge. It would be some years before I would come to rely on the sapr3-list  (hosted by Bryan Thorp) and Merlin (hosted by DJ Adams) mailing lists as a source of collective intelligence, albeit over a slow Internet dial up connection. Many years later on, the Service Market Place and then the SAP Community Network would become resources heavily used in my day to day work. You might say these knowledge stores were part of the personal network which I would rely on to enjoy my work as an SAP professional. 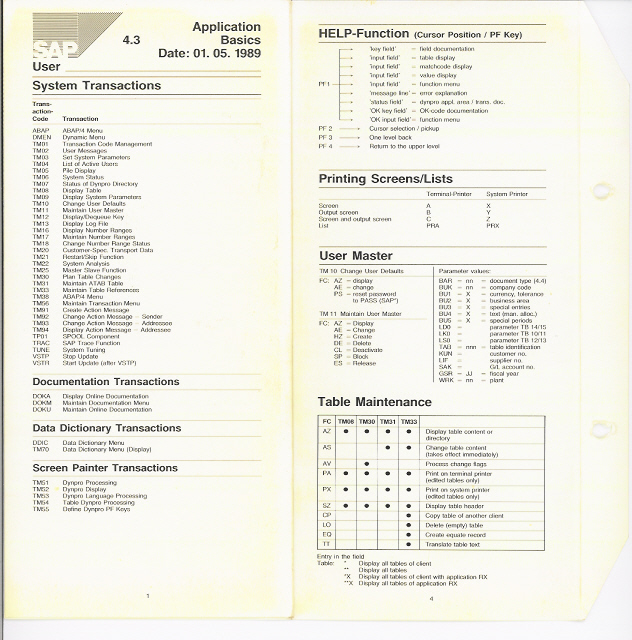 SAP R/2 Reference card (I still have a complete set!)

It would be twenty years after my fist SAP experience that I would decide to actively repay my debt to the SAP Community by writing a series of SCN weblogs and participating as a speaker at several local SAP events. As it turned out, my contributions were noticed by several SAP Community members including SAP Community Evangelist Mark Finnern who selected me as part of the 2009 SAP Mentor intake.

Strangely, I had earned the official title of SAP Mentor by repaying a debt to the SAP Community which had nurtured me over the years. I would now enjoy the privileges of belonging to the new SAP Mentor Tribe but I would also have to deal with the negative attitude of colleagues who saw this new title as a distraction to the Status Quo of my day-job. Many of my subsequent Community contributions were met with snide remarks about doing my own job and not the job of SAP. One particular Manager took it upon himself to write a negative comment on an SDN Weblog which would elucidate the role of an SAP Mentor for me – to change perception and build culture.

To paraphrase Seth Godin, instead of watering down your message to please everyone, it is far more powerful to share your message with a motivated tribe in the midst of a movement.

Forming my own Tribe

Fast forward to a discussion with fellow SAP Mentor Paul Hawking during the SAP Australia User Group Summitin August 2010. During a taxi ride to the Sydney airport, Paul had convinced me to bring much needed hands-on industry experience to fifth year ERP Masters University students at the Victoria University. This would be a great new challenge – a chance to build culture and change perception from the grass roots of the SAP Ecosystem. I devised a curriculum for the Introduction to SAP NetWeaver Administration elective which would come to be known as BCO6181. 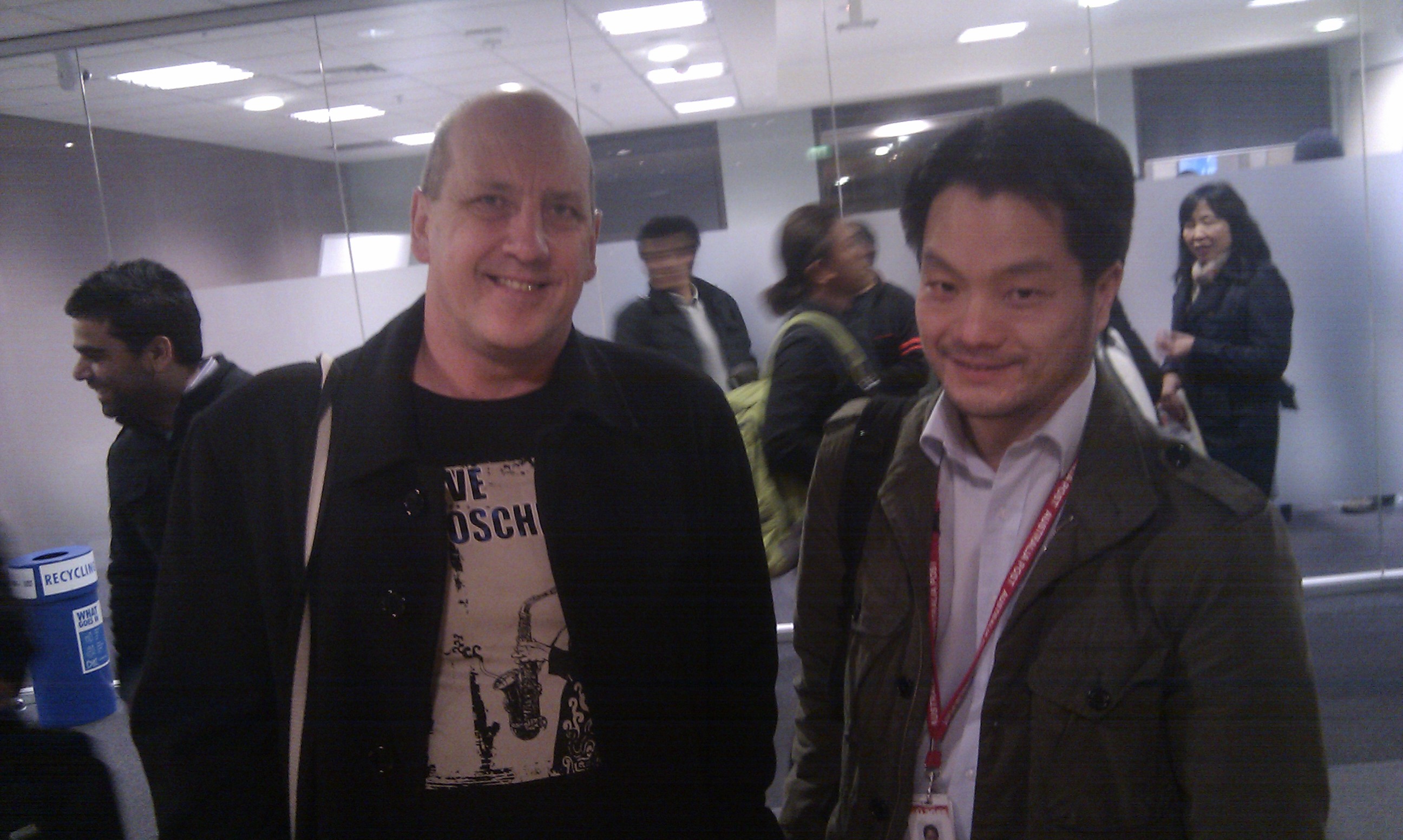 The curriculum was loosely based around the following initiatives:-

The assessment of the subject would involve the following

In order to make the BCO6181 class as dynamic and useful as possible, I would invite several industry thought leaders as Guest presenters. After all, a Tribe is all about forming strong connections:-

The Special Visit from Ray Wang

The BCO6181 students were encouraged to research each guest by looking at Twitter feeds, SCN Weblogs and Linked in details. This way, they have an “ice breaker” to engage each presenter with intelligent discussion if given the opportunity. This research resulted in a student noticing that Ray Wang (SAP Industry Analyst) was in Australia attending a speaking event in Melbourne. I had the good fortune of connecting with Ray earlier at the SAP Influence Summit in 2009, so I sent him a simple Tweet on behalf of the class asking if he might consider presenting a small session to the BCO6181 students. To the delight of the entire class, Ray gracefully Tweeted back that he would love to join us, and showed up after a full day of presentations in Melbourne to enthrall the BCO6181 class of 2011. 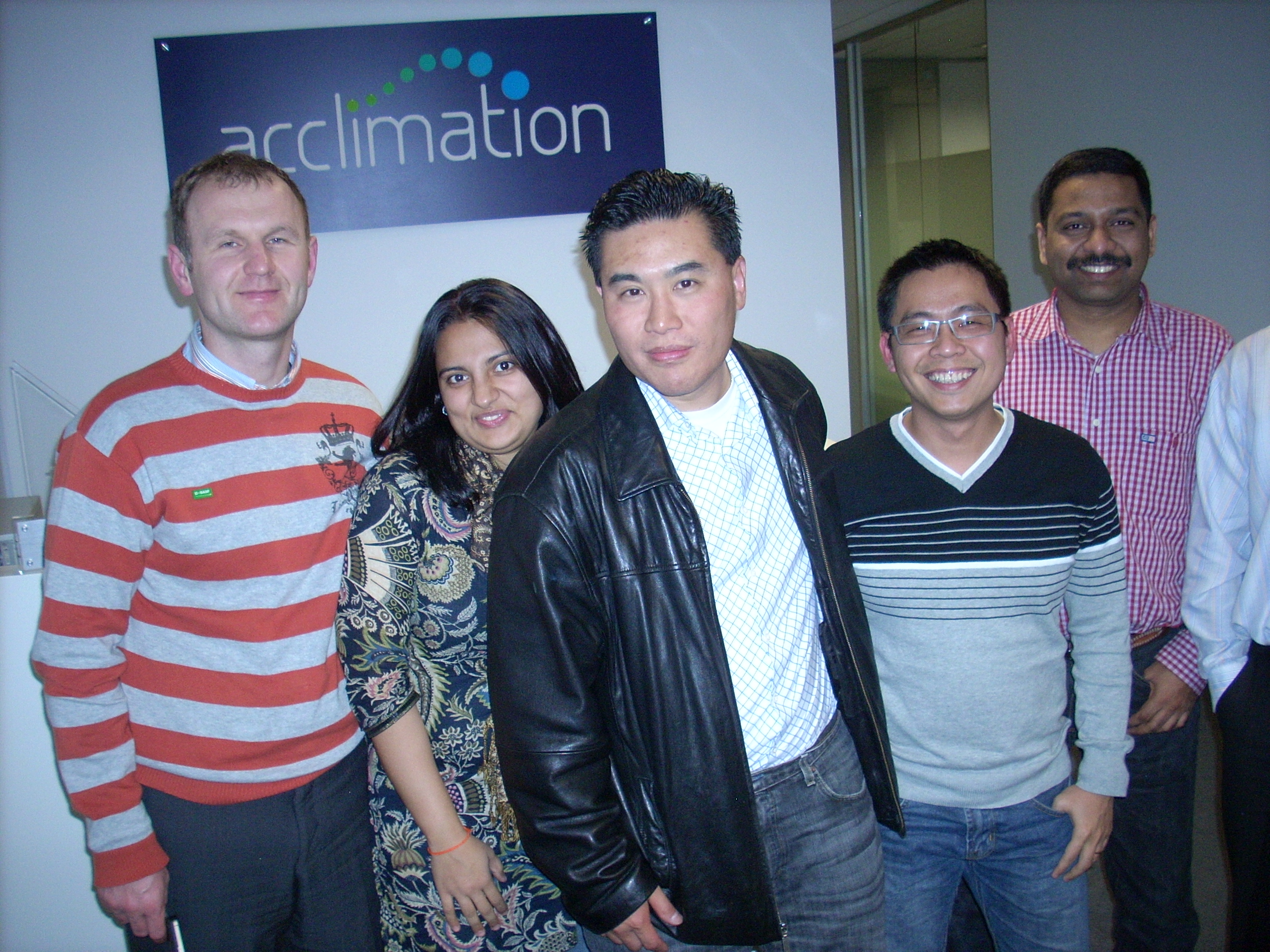 Every Tribe needs people who are willing to follow. The way to make people eager to follow the tribe – is to enroll a number of Micro-leaders willing to give encouragement and constructive advice. If you ever bump into me at an SAP event, you know I will swiftly tell you about BCO6181 and ask you for your words of encouragement on tape. The more motivated the contributor, the more deep rooted the impact message will have. The best words of encouragement came from the great Hasso Plattner at the Sapphire Now Global Communication event in Orlando in 2011. He agreed to be photographed with me and encouraged me to further explain the benefits in-memory computing to the BCO6181 students. 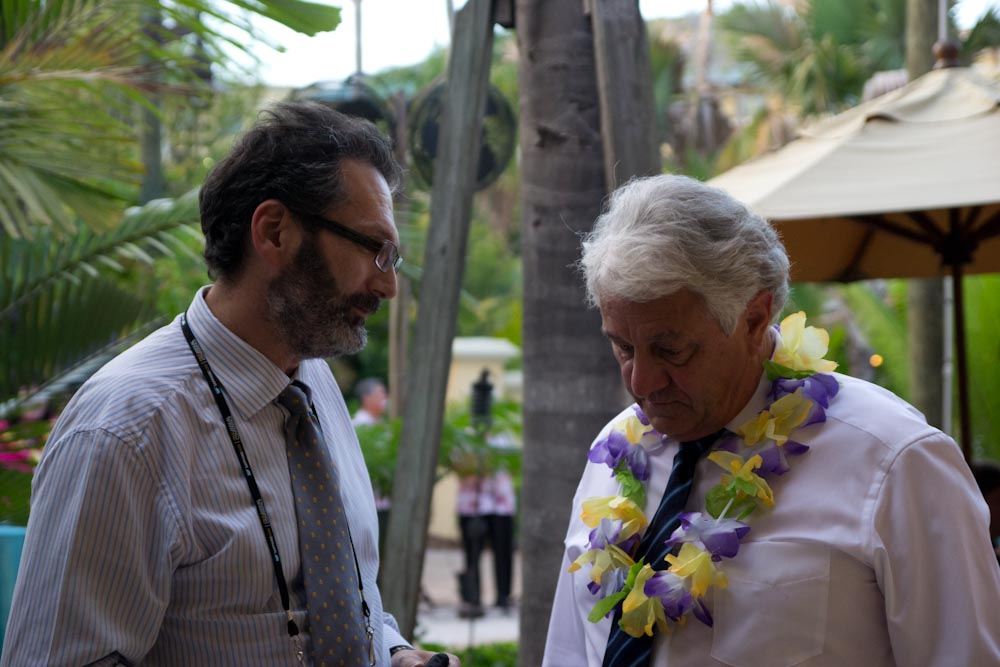 A small discussion about BCO6181 and in-memory with Hasso Plattner

Some of the many micro-leaders I have on tape expressing words of encouragement and motivation to the BCO6181 students include:-

Albert Einstein once said something about imagination being more important than knowledge. I try to teach what might be – if the students imagine it to be possible. Imagine getting a positive comment on an SCN weblog, imagine having a coffee with the CIO of a company you would like to work for, imagine getting advice from Ray Wang on Twitter, Imagine showing your MiniWAS during an interview, and imagine doing a pre-sales job demonstrating SAP Gateway to a Senior SAP Architect….All these things are possible for BCO6181 students with imagination.

Something to believe in

In closing, you will be pleased to know that I have helped to secure paid positions for three of the BCO6181 students from my 2011 class. Nasir Gondal picked up a 12 week contract at Spotless to roll out the SAPGui for Australian and New Zealand users of the successful Springboard project. Nasir has also volunteered to be my trusty Lab Assistant for the BCO6181 class of 2012 – an extremely valuable micro-leader for the BCO6181 Tribe. Kiran Ramineedi and Chinmay Bhatt have both completed a 3 month cadetship at Acclimation where they are learning the craft of SAP pre-sales. Kiran participated in the EHP5 upgrade at the RACV and was a contributor during the go-live weekend. Most recently, Chinmay and Kiran have earned certifications as SAP Solution Consultants and are both studying for certification as a SAP Support Consultants. 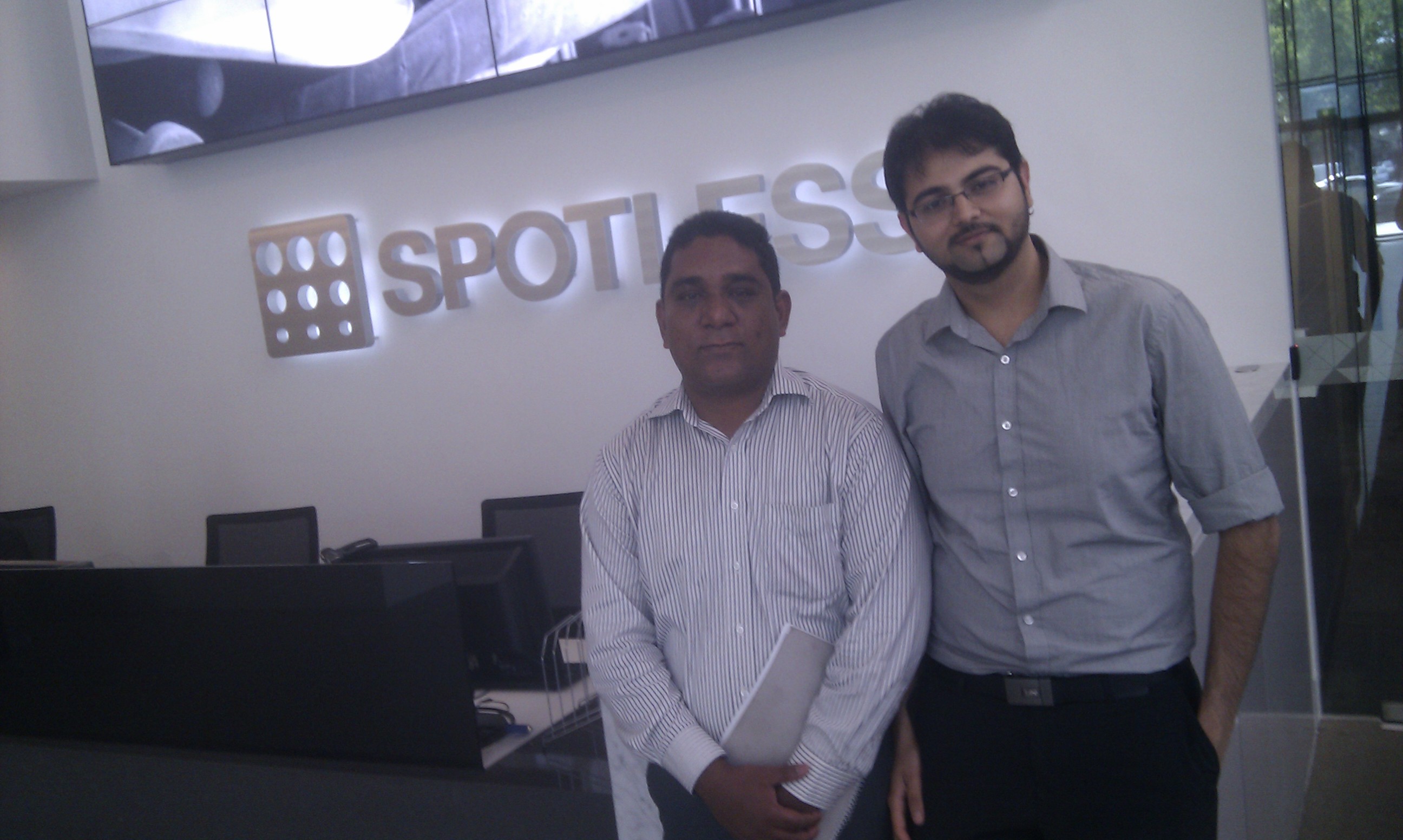 If you got anything out of this weblog, I hope you will do something for me – tell someone else about it and ask them to leave a comment on the BCO6181 Facebook site. Maybe you will inspire the next Tribe leader – spread the word!