Summary: This document is intended to show the step by step procedure to import SAP BW objects from one system to another.

Including a BW object into a transport request
There are many ways to include a BW Object in a request of which one is shown here. Call T-Code RSA1 in the Source system (here DEV) > Transport Connection functional area > Search for the object that needs to be transported and drag/drop it on the right side of the screen as shown in Figure 1. Consistent requests that take object dependencies into consideration are especially important in BI because the metadata objects are activated in the import post processing step. If dependent objects are missing in the transport request, this results in errors during activation. These dependencies are mapped to the grouping modes when the objects are collected.

Only Necessary Objects:
Only those objects that are really required for the action (copying or transporting the selected objects) are taken into account (minimal selection).

In Data Flow Before and Afterwards:
All objects that provide or pass on data are collected. For example, if you are using an InfoCube, the objects required to activate the InfoCube are collected together with other objects that are required to activate those objects as well. This includes objects positioned both before and after the InfoCube in the data flow.

Save for System Copy:
This setting is used when a source system needs to be copied and renamed. Hence having to re-create objects for both SAP systems and BI systems and be avoided.

Collect Automatically (default setting): The data is collected as soon as the objects are selected.
Start Manual Collection: The data is not collected until you choose

Once Grouping and Collection modes are selected, click on

symbol to create a transport request (see Figure 2), select the Package name (Specific for a project, get it from the Basis Team) and save. Request ID is generated as SIDKXXXXXX, (SID-System ID). By default all the objects are included in the package $TMP.

Use: Initially the request will be in Modifiable state, it should be released from the development system to move it into further systems. 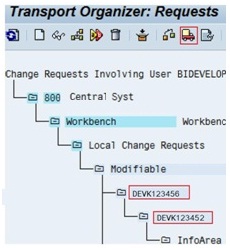 Release directly. As soon as the transport request is released, it should be available in the Import Queue of the target system (here testing system). Make sure that the connection exists between these two systems.

Use: The import queue displays all transport requests flagged for import for a particular SAP System.

Procedure
To check the Import queue Call T-Code STMS in the target system (here TST). It will take you to the TMS screen shown in Figure 4. Now click on

symbol, it will take you to Import Overview (Figure 5) where all the systems defined can be seen. Double click on target system (here testing system) to check the import queue. 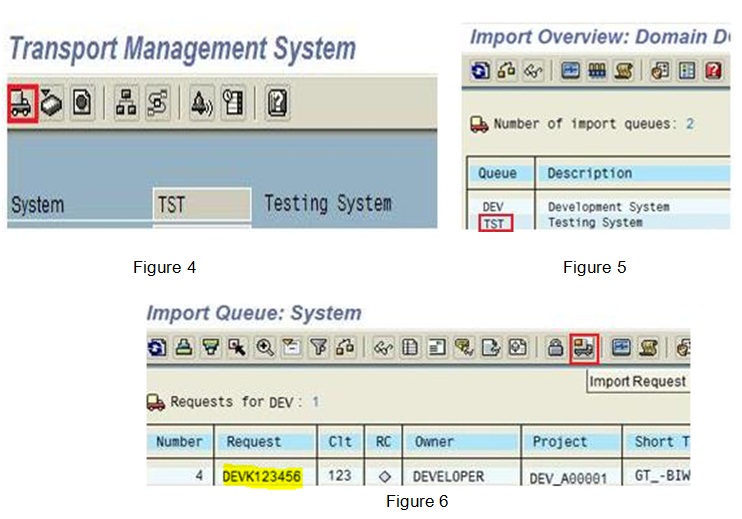 Import queue is shown in Figure 6, where

For performance reasons, the data required in the queue is read from the transport directory the first time the TMS is called. After that, information buffered in the database is always shown. To refresh the buffered information, choose Edit > Refresh (F5). Sometimes even after refreshing the queue

appears next to the transport request as shown in Figure 7. Click on

(Adjust Import Queue) and choose ‘Yes’ (Figure 8). Here TMS transfers the data files and co-files belonging to this project and confirms the transfer in the import queue. Now the transport request is ready to be imported into the target system.

a) Starting the Import for Individual Requests (Single Transport Strategy)
The TMS allows importing individual requests from the import queue. The requests you choose are imported in the order in which they are placed in the import queue. Select the Transport request and click on Transport Request as shown in figure 5. The screen displayed (Figure 9) helps you in choosing the options to import the transport request which is explained below.

All the options for starting an import in TMS are listed here. 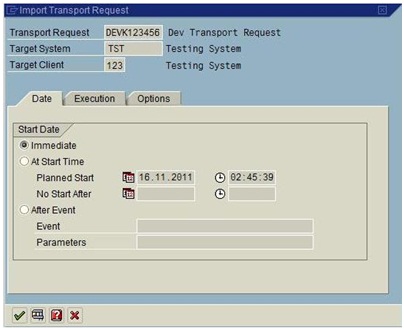 The options you have depend on which import type you have chosen (project or individual import, import all requests, transport workflow).

On the tab page Execution, you can specify how you want the transport control program tp to start:

All the options for starting an import in TMS are listed here (Figure 12). The options you choose depend on which import type you have chosen (project or individual import, import all requests, transport workflow). 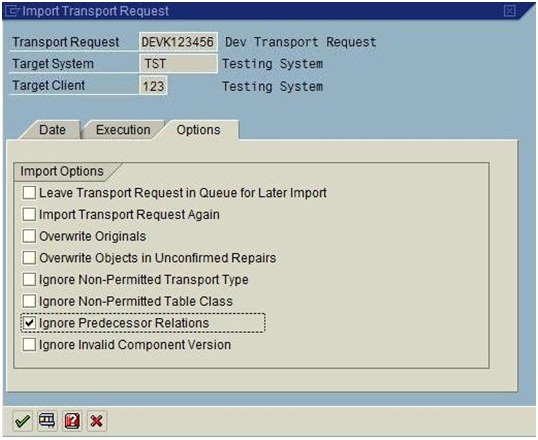 Use: To check whether a transport request has been successful imported, the return codes (Figure 13) are generated by the programs used for the transport.

(Import History) in the Import Queue Screen. Return code for a particular request can be seen next to it.

Go to History > Extras > Other Requests > Add.
Enter the transport request needs re-import, Target Client and check the Import again as shown in Figure 14 and Figure 15.

Now the transport request will be ready in the import queue for importing again. Select the request and click on

Transport Request > Now select required options in Date and Execution Tab. In Options tab you need to select the below options (Figure 16) because the request needs re-import. The use of each option is same as explained in previous section. 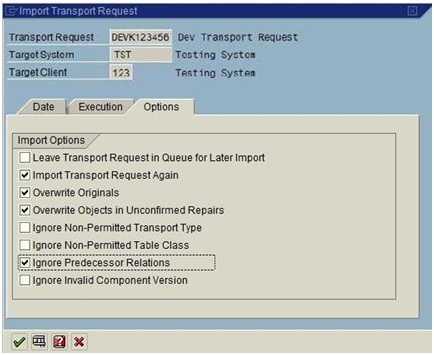 Delete a transport request from the Import Queue

Use In exceptional cases, you may have to delete a transport request from the import queue so that the request is not imported into the target system. If you delete change requests from the import queue, inconsistencies may occur during the next import due to shared objects. Suppose you delete request 1 containing a data element which is not imported. In request 2, you transport a table that references this data element. Since the referenced data element does not exist in the target system, there is an Activation error when request 2 is imported.

Use You can refresh the display of the import overview and individual import queues. However, it is more convenient to update the import queues periodically in the background.

Schedule a periodic update of the import queues, at least in the SAP System where you use TMS the most (default period Daily is recommended).

How to find the transport request that changed a BW Object in the system >> (http://scn.sap.com/docs/DOC-25248)

Use full document on transportation.

Hi masters can any one tell me how to transport objects in bi?

I guess, the above document will help you. 😐
Let me know if it doesn't. 🙂

Its Nice doc, keep it up.

Good learning from this document... 🙂

Nagendra you may find it here
http://scn.sap.com/people/sai.prasad5

is there a way..where i can download this as a document other than PDF(as my system does not support pdf 🙁 )??

Srivasulu: You may try copying into a word document. 😉

Thanks Sai. This was very clearly explained. 🙂

Great post on Transport management. Thank you for the exceptional contribution. And thank you CH Raman for pointing to this post.

this was covered all info regarding transport collection sequence  to release. so its really useful one.

Nice sai. your step by step explanation is simple and clear.

When importing multiple instances of SAP BI/BW into a common HANA system using the transport connection, please let me know if there is an easy way to avoid 'duplicate object name' error? or should we rename all source objects so that they are unique?

Multiple instances of BW cannot be moved to a single HANA system. May I know what exactly you are trying to do?

Please could you provide any solution or suggestions for performing the aforementioned activity. Thanks in advance.

I have a question - whether the co files and data files contain the complete object or just the change.

Suppose I create a cube and keep it in TR -X , move it to Quality.

then I make some change in cube suppose delete a info object and move new TR - Y to Q.

Now I add another info object - and move the new TR Z to Q.

what I know that usually we move all three TR in the same sequence.

But what if i just move "Z" to Production and leave X and Y in Q.

After copying BW objects to another system, can we replicate the old object values/data (master data, hierarchy and transactional data) to new objects, if yes, could you please share the info.

Very nice document,Very neat and clean explanation.I have problem i missed object can export  the object with same TPR id ? or new TPR ?

Great thanks to share this document. I have cleared my confusions. Thanks.

It is really help full and clear.