Monday (26th of March 2012), I seem to have raised a touchy discussion about how to qualify good content.

As my mind was shrugging off the weekend mode, I started thinking about the entire reward system here at SCN. In it’s bare essence, it’s a form of gamification. I never looked at it in this way, although now I think about it, it seems so obvious. You essentially reward good content, by which you encourage the author to produce more of that good content. At the same time, you also create a competition among contributors to create better content than your peers. It’s a great technique to improve the community feeling, the contributions and the involvement of members. 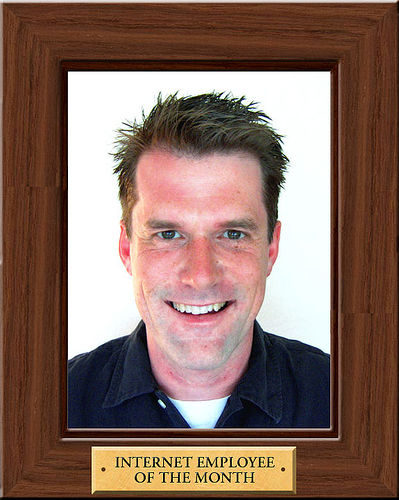 In his blog, Mario Herger describes the concepts of gamification, and how they can help enterprises in achieving their results, whilst better managing their employees. He puts the link with the Dilbert comics (which always works well for me). It looks here as if Gamification is the answer to all your problems. Maybe I exagerate, but in any case, the article really highlights the benefits. (good blog btw, worth reading)

As soon as I thought about gamification it also struck me how I -myself- reacted to the new system of recognition. Keeping that thought in mind, I started thinking about possible side effects to gamification. Pitfalls, if you will. It didn’t take me very long to identify a nice little list of threats that can turn your gamified environment against itself.

Also bear in mind that gamification is not new! Anyone remember the “Employee of the month”-principle? That’s gamification too!

The reason that gamification works so well, is because everyone is competitive. By introducing a form of competition into an existing community, you will notice that, automatically, people will start competing eachother and themselves.

BUT; Is the above statement correct? Does everyone compete?

Ask yourself the question: When you start something new and you are enthousiastic about it, don’t you then strive to be the best at it?

Most likely the answer will be “Yes darnit! Why would I do something, if I don’t have the ambition to achieve something with it!?”

Probably, in this community, more than 90% of the people will be competitive/ambitious. It’s hard to roll in the SAP world without ambitions, without a competitive spirit. If I look at the people I know, I have a very hard time to come up with some that have no ambition/no competitive spirit whatsoever. So maybe the percentage is even higher. (Disclaimer: the numbers I put here are my own estimations based on my own surroundings. It’s hard to find figures on this subject)

It does however imply, that there will always be a minority that doesn’t want to compete and for who Gamification will not work.

You can cheat in any game

There’s no game in which you can’t cheat. Cheating is as old as playing games. In the old times, people used weighed down dice, slipped cards up their sleeves or fought unfair. Today, in international soccer, the word “Schwalbe” refers to players that pretend to be the victim of a foul, so they can get a penalty. It’s a way of turning the rules against the game.

This can be very hard to identify. If you act completely according to the rules and manage to make your benefit by creatively applying it, you can break the gamification system. In Belgium, the most popular national sport, is creatively applying taxation rules to pay as little taxes as possible. Companies manage to pay only 2% taxes in a completely legitimate way. Everyone knows that it is entirely against the spirit of the rules, but it’s not a violation. (it’s not only companies by the way. Everyone does it, also on personal taxes. It just happens to be more visible with companies.)

Gamification is not a goal

The goal should always be “improving your results”, whatever these results may be. Gamification can provide you the means to reach this goal. If you put too much the focus on the game, you jeopardize the results and you can end up with the previous pitfall. The system could be turned against itself, completely annihilating the results for sake of the game. If this happens, than you either have to remove the game, or you have to adapt it to better fit the purpose.

Change the game, change the behaviour

If you however decide to change the rules of the game, you also have to be aware that the user behaviour will change. People will have to find a new “playing”-style which yields them the best result and hopefully also improves the actual wanted results. My first reaction when I saw the new game rules right here was: “Meh, it looks cool, but what will it mean to me?” Two weeks later I was getting concerned already, and considered to change the way I interact with the website. (Which I actually don’t want to, because I’m a fan of blogging)

So keep in mind, that when you introduce gamification, or change rules of an existing game, you do so with the intended result in mind and with your target group of users in mind. Their behaviour, will affect your results. so you better make sure they are aligned and diversified as well. Not everyone works in the same way.

Just because not everyone works/plays in the same way, you can’t judge everyone in the same way. A slalom skier is not judged on the same criteria as a freestyle skier. If they were, we would never see a double cork on the big-air, we would simply see them going around the jump.

This is something to keep in mind. There are many paths to a destination, so make sure you don’t focus on one way of working, but you diversify your “game”. Otherwise, you risk losing your creative personnel who have alternative ways of getting the job done, but don’t see any reward for that.

A very important and often overlooked playing style, is teamwork. Most gamified environments reward individual achievements. Just like not all games are individual, many achievements in professional environments are reached by teamwork. This also has a very high impact on inclusion . “Why?” You may ask. there is a fundamental psychological difference in the mentality between the men and women. This is not me saying this, this is a universal phenomenon. There are always exceptions, but if you don’t foresee alternative rules for teamplay, you risk losing talent!

to me, it’s obvious that Gamification has some significant benefits. Most companies already have some form of gamification in place. Mostly even without knowing so!

However, when you introduce new gamification concepts, you have to be very careful. The rules of the game must be well balanced. Paths to achievements must be well diversified. Above all, you must always focus on the expected results, not focus on the game itself, but on the intention. And if you want your “gamification” approach to be successful, you’d better keep the behaviour of your target group in mind!

I agree completely with your conclusion that paths to achievements must be well diversified and include team play. Game designer and gamification expert Jane McGonigal mentioned collaboration and cooperation frequently in her book Reality is Broken, whereas leader boards  do not even rate a mention in the book's index.

Excellent book tip. Will be picking it up this weekend at the book store!

edit: didn't make it to the book store, but ordered it online. looking forward to receiving it now.

Nice blog. I like how your blogs read fluently which is something I always aim for myself.

Gamification is an interesting topic for sure and a topic SAP is very active on as well.

When I was at the Virtualization&Cloud week in Palo Alto I got invited to help out in a post-it war: http://t.co/8iY2hhZC Great fun of course and a good way to do some team building / connect with others.

Will I do a post-it war again in the future? Very likely but then it would be most likely more geared towards inspiring others to do discover it and experience how it can be fun.

She was invited as a keynote speaker at SAP TechED 2011 in Las Vegas. Note the mention of Jane in my SCNotty award video near the end or even at the end:

What I personally see as a possible pitfall is that people get bored quickly. While gamification can encourage activity and so on, it only works when it stays interesting and that's a big challenge. A possibility to avoid people from getting bored is encourage people to get them to a certain point of understanding / involvement / collaboration where they no longer need the encouragement and they still continue to contribute and so on which is basically what the point system of SCN used to do and perhaps still does.

I always order from Amazon by the way, I always prefer reading the English version and delivery doesn't take to long normally.

Very cool post-it T-Rex. Love the way how it's still relevant to SAP. (in terms of TREX search, not in terms of SAP being a dinosaur) 🙂