Service Pack 3.0 (SP3) for Visualization Solutions by Nakisa (VSN) 3.0 is due out any time now. As usual I’ve put together a brief blog on the features contained in this release.

SP3 is yet again focused on creating stability, optimizing performance and fixing some of the bugs caused by the transition from .NET to Java. It also has a focus on enabling partners, customers, SAP Support and Nakisa Support to better troubleshoot issues.

Some of the new features in SP3 include:

Performance of both the application and the AdminConsole has been improved. The AdminConsole is now significantly quicker so that making changes is more efficient that customizing, which can sometimes lead to coding errors and instability.

2 new features to manage builds have been added. It is now possible to delete builds from the AdminConsole build loading screen, since access to the file system is often unavailable. Another option is the Reset Build functionality, which allows the existing application build to be cleared and restored with the default application so that any “contaminated” files from other builds are removed. The existing build can then be published as if applied to a freshly deployed build.

The Enable/Disable Logs and Log Viewer have been combined into one feature. In this “new” feature all of the functionality from the 2 features is included, plus the possibility to export logs and generate a Performance Report.

The System Information feature also allows this information to be exported. 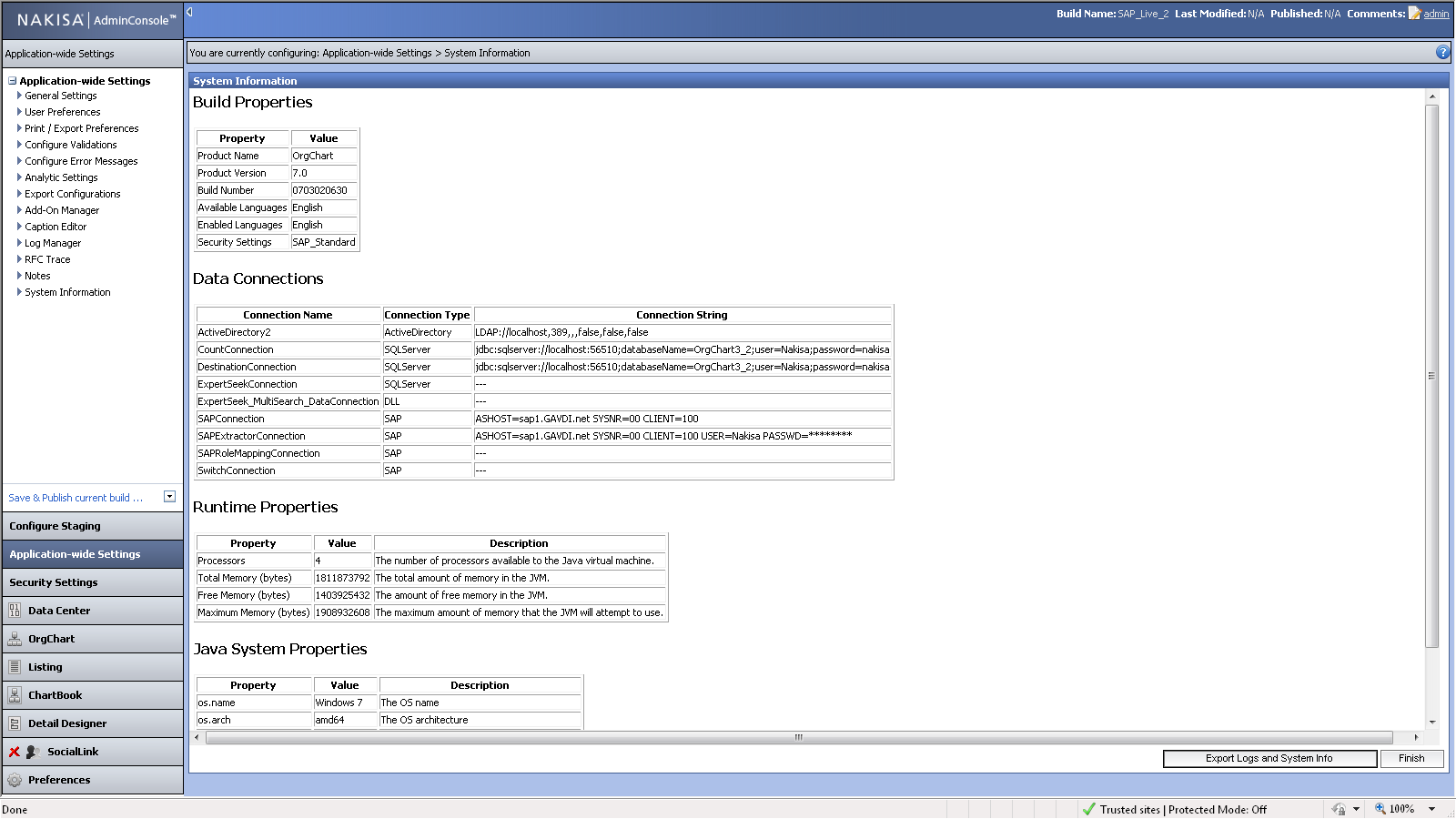 The output is listed per function module in either a list view or a table view. 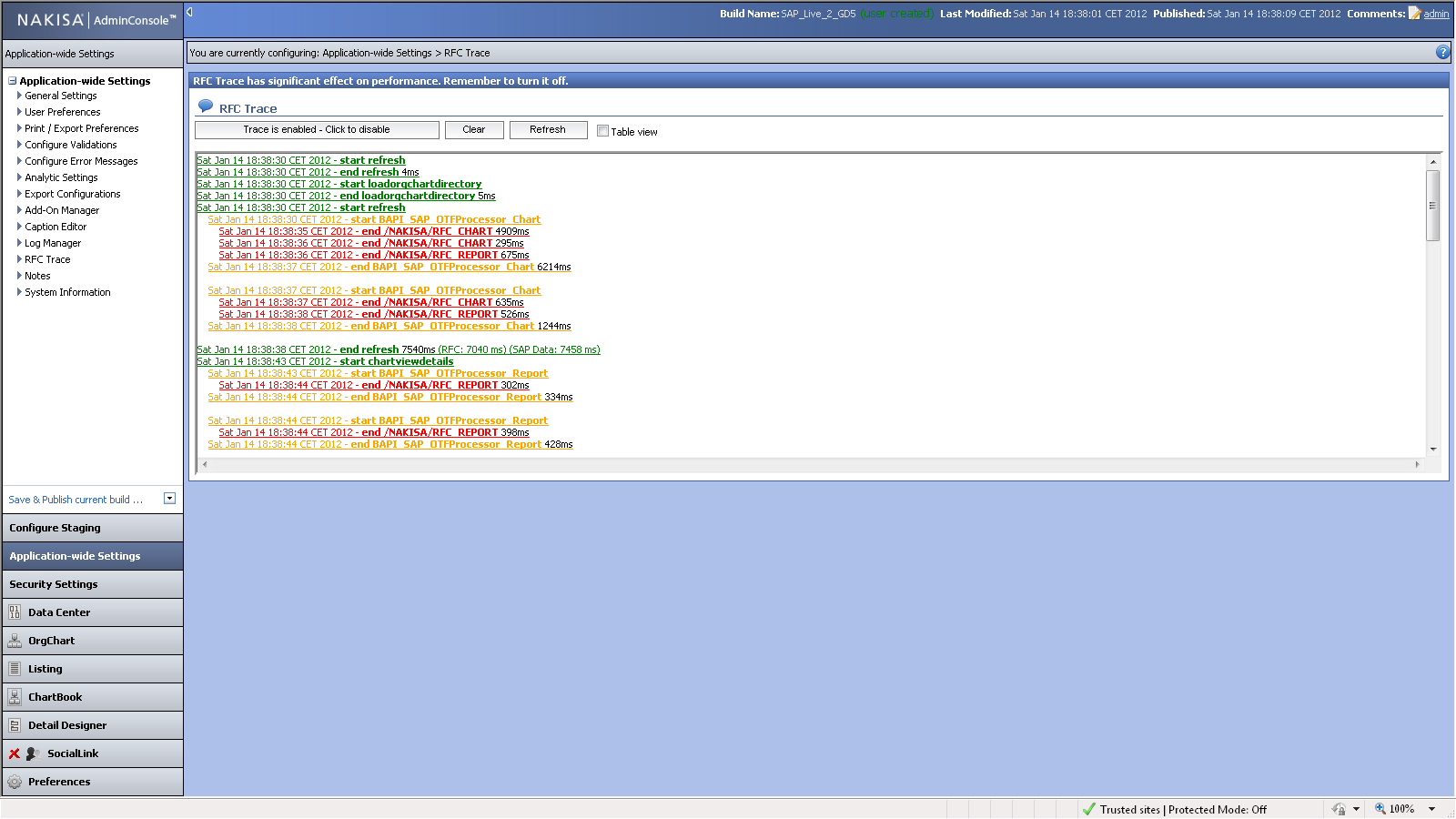 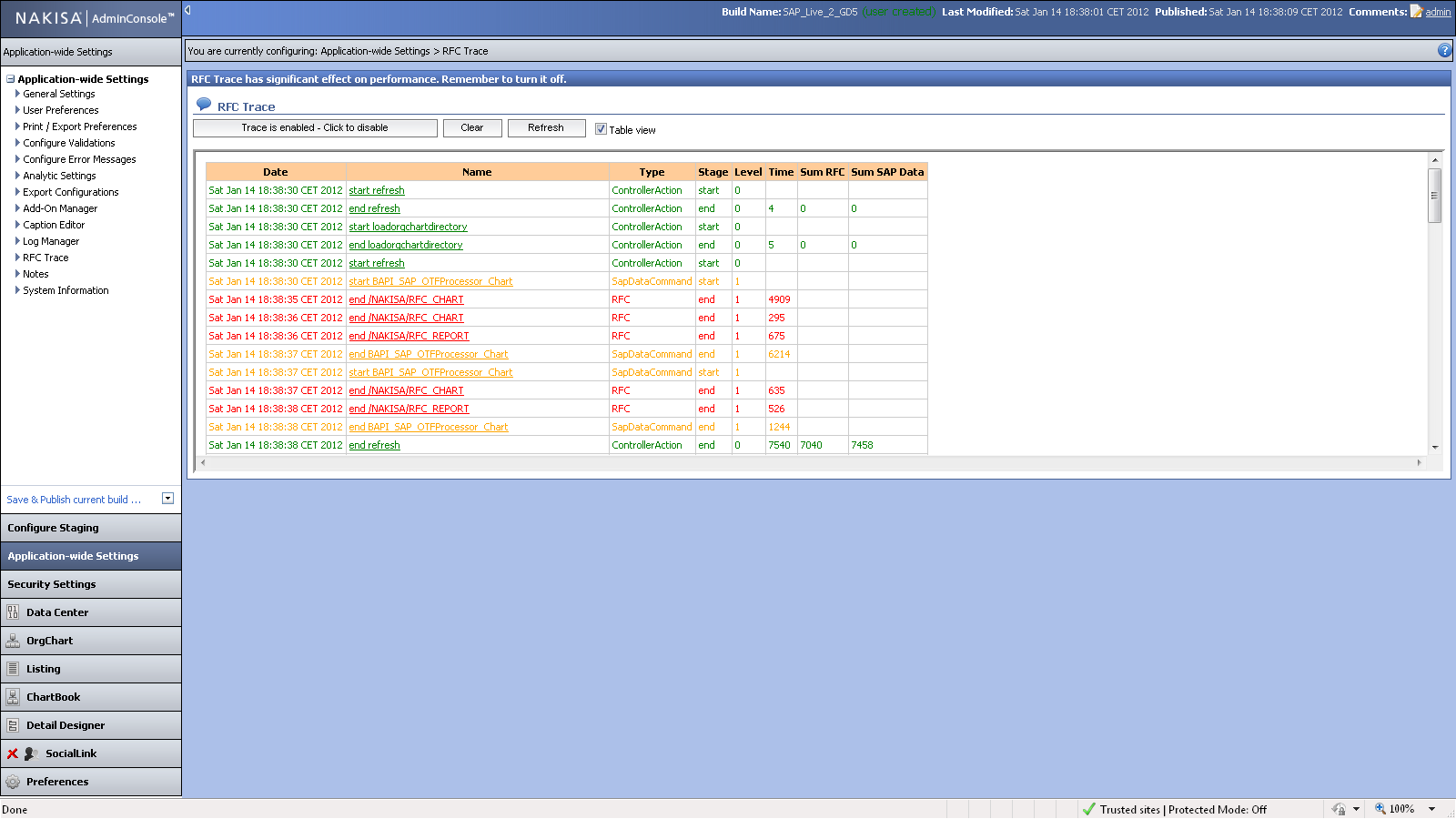 Each function module can be selected to view a detailed summary of the input and output parameters, the values of each parameter, the returned values and the total times. 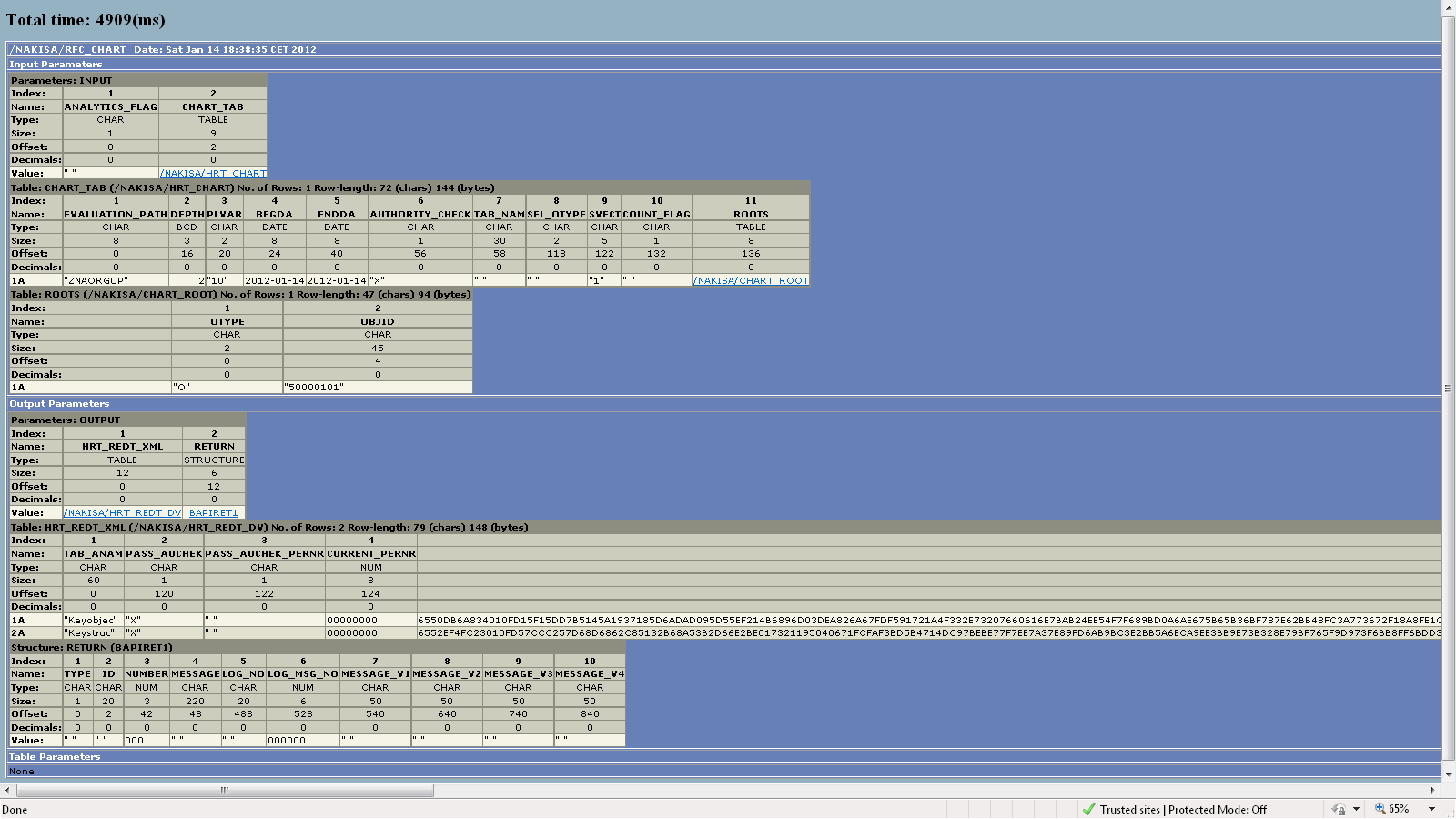 A nice feature for usability is the ability to zoom in and out of the org structure using the scroll button on the mouse. I certainly think it makes a difference when navigating around big structures.

Another piece of functionality that was lost when the Flex version was introduced was accessing node menus with a right-click. Thankfully this functionality is now back, making it less likely that you open the details panel rather than the node menu.

Up until now expanding an OrgUnit or Position would just freeze the screen until the operation was complete. Now the Loading icon will appear while the action is processed.

Some new frontend functionality included in SP3 for OrgChart and OrgModeler is the Notes feature. This allows the user to enter either public or private notes about the object, either through the box node menu or on the details panel menu. These notes can then be viewed either on the object box in the structure or on the details panel. They can also be printed and exported. 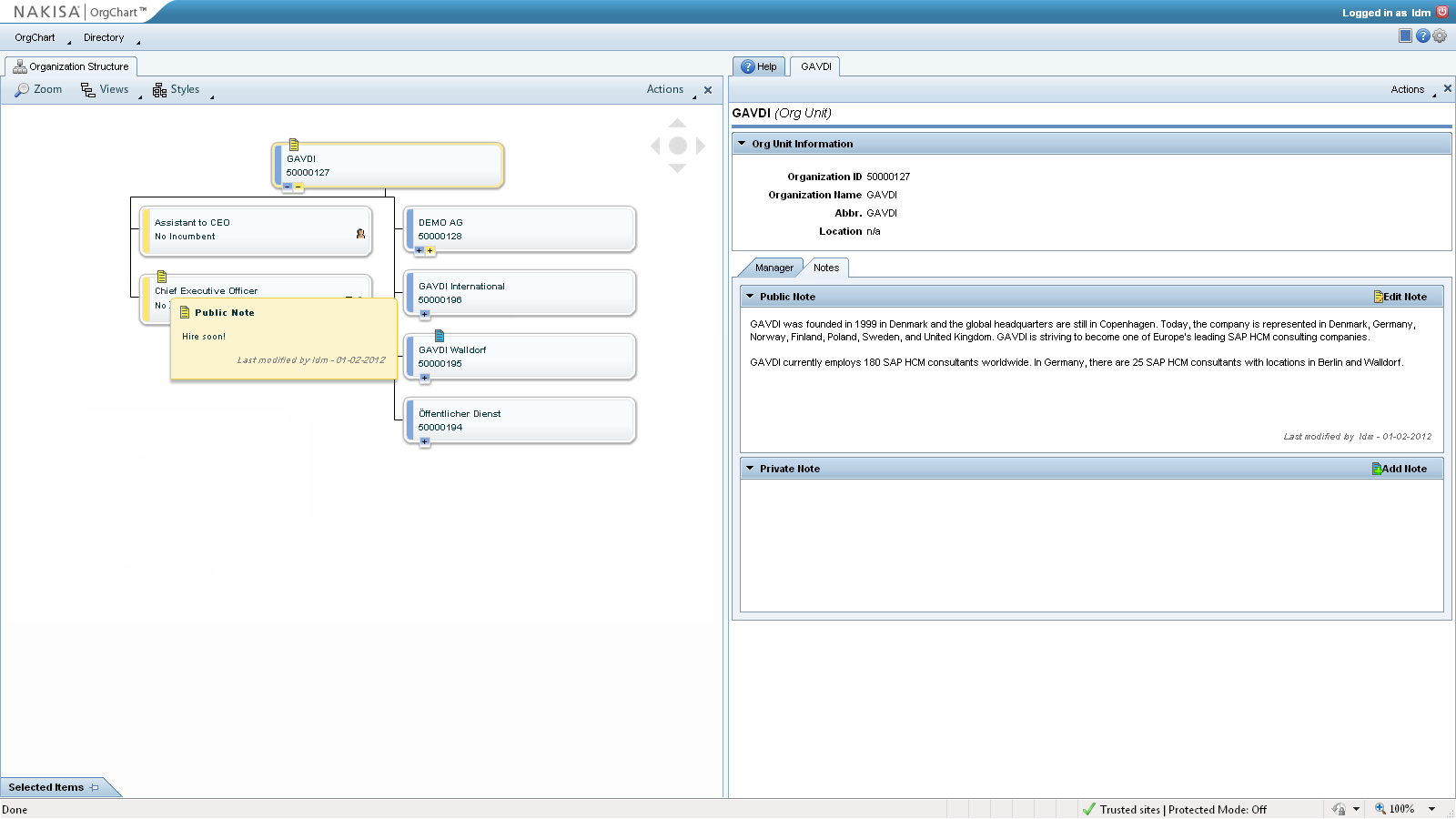 User variables have been introduced in OrgChart and OrgModeler to provide the ability to allow features in the views to be switched on or off, such as colour coding or icons. Once configured, it adds the option into the OrgChart Settings in the Actions menu. I found this to be extremely useful at a client who wanted to be able to identify different types of positions by colours, but didn’t want this option to be enabled permanently for clarity purposes. As this is a “generic” configuration, it can be configured to switch all kinds of data or functionality in the views on or off.

The possibility to filter objects in the OrgChart has been included in this release. The filter allows for a specific view to be used for all objects that do not fit the search criteria. So, while it does not remove objects from the orgchart it does make all filtered objects appear in a predefined way. Currently this functionality only works for Cost Center, but additional filters will be available in future releases.

In OrgChart it is possible to secure several actions for different user groups, including:

Removal of Open Positions from analytics

In the Demographics Analytics in OrgChart, open positions will be removed. This nearly always causes a problem because the data always displays Unknown.

OrgModeler now features role-based security, similar to that offered in OrgChart. This has been a requested feature recently on the SDN Forum so it is good to see it make it into the application.

CareerPlanning, TalentFramework and SuccessionPlanning now contain an option to refresh the data in the orgchart, searches and details panel with a click of a button. I have heard of situations at some clients where the data does not refresh, often to do with browser or firewall settings. This button, located on the OrgChart bar, provides the user with an option to refresh the data immediately. This option can also be disabled in the AdminConsole if it is not relevant to the organization. 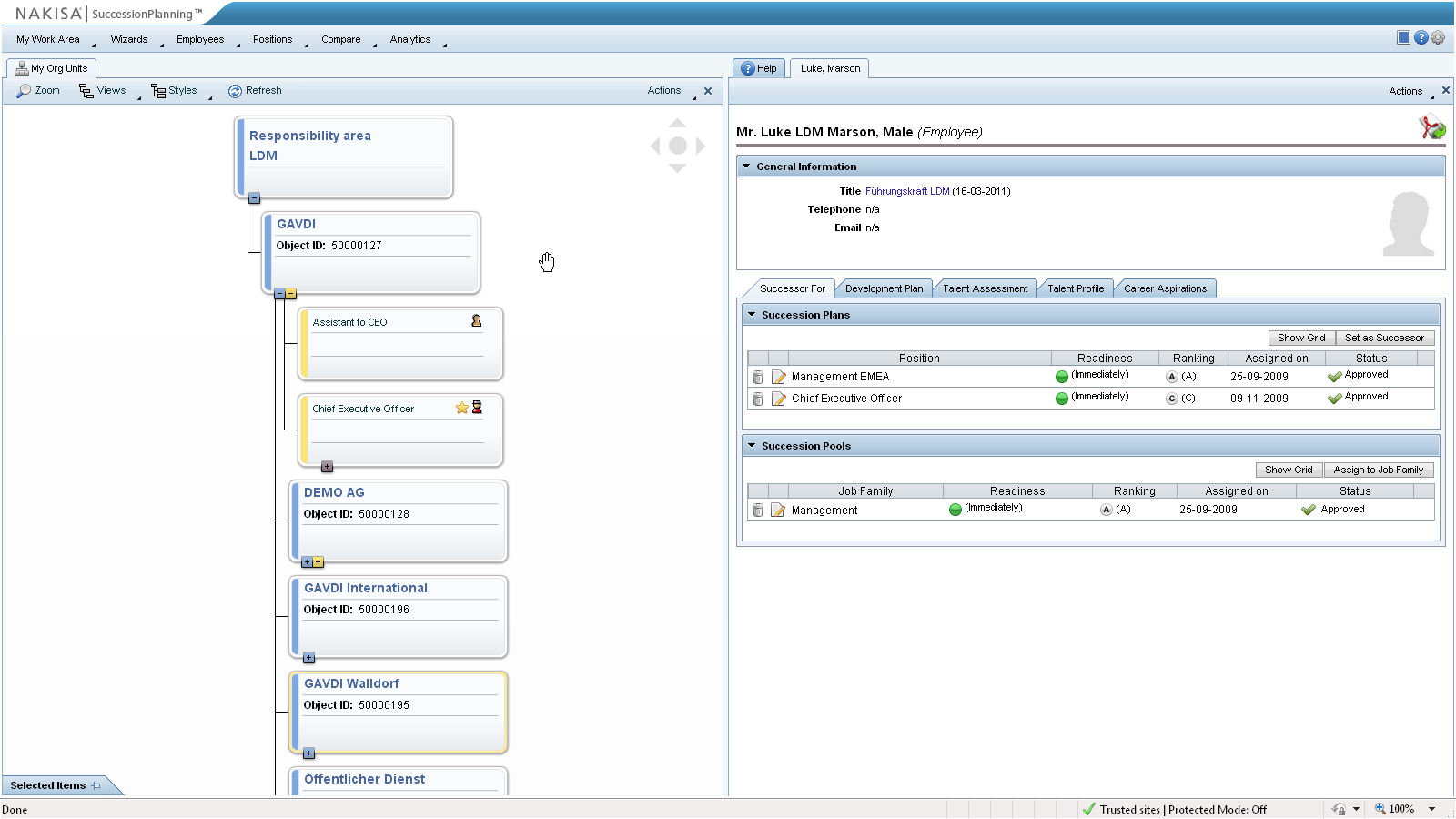 There are some new changes in DataQualityConsole, namely:

The Audit Rules have changed. The following audit rules have been removed: BenefitInformation, AnchorBandInconsistencyPS, AnchorBandInconsistencySC and BonusPayout. 2 new audit rules have been added; one for leave requests that have not yet been approved and one to detect if a position is flagged as chief in an orgunit that has another position flagged as cief.

An Employee listing, Position listing and OrgUnit listing have all been added to help find these objects in the application.

The Score on Company Code (12 Months) dashboard has been added. This provides the score trend for the past twelve months based on company code, in its own dashboard.

The position views have been tidied up slightly, becoming clearer and removing unnecessary characters from the view template.

A Time Lag Report has been provided in some details panels to provide information about the difference between the start time and date of a record and the change time and date.

Some languages that were supported in SP1 but not in SP2 are now again supported. These languages include Chinese (Simplified), Danish, Dutch, Italian, Japanese, Korean, Brazilian Portuguese, Russian and Swedish. Support for Chinese (Traditional) has been introduced in SP3. However, these languages are only fully translated in the Language Pack (LP) for SP3, due out shortly after SP3.

As usual, this Service Pack release contains over 1,400 bug fixes that were discovered during various projects in the last few months prior to release. Hopefully the “teething” problems from porting from .NET to Java should be finished and there should be an increase in stability and user acceptance.

Nakisa continue to increase the usability and administration of the application from an implementation and maintenance perspective, as well as adding some new features for the end user. Stability and usability have been enhanced and overall there are a lot of new features for a Service Pack release. Nakisa have created a solid platform to build on for their 4.0 release, which promises to be rich in features and functionality.