Like many of you, these last few days, I have taken the time to get acquainted with the new Community network. I had been looking forward to the new SCN for months and was super-excited when I logged in one morning, to see a brand spanking new website. Nearly everything seemed to have changed, but being one of those seldom people that welcomes change (apart from babies with a messy diaper), I quickly set upon exploring this new territory.

My first step of exploration was to log in to my account and update my information. Making myself known to the public, so to speak. Immediately I hit a dead end. Many here have already reported issues with the single sign on and the dropped sessions. In my particular case, the problem was even a bit bigger. I simply could not log in. The system didn’t allowed me. After reporting this issue, I quickly received a reply with the root cause. Apparently, I had 2 accounts on the same email address, and this caused problems with the new platform. The root cause of this tracks back to 2008, when an issue with my only account (at that time) was fixed by copying the entire account and disabling the old login. It’s probably a pretty rare case and after removing the inactive account from the database, I had access!

Second hurdle: Where is everything?

Once I had entered the Jungle that SCN had become (figuratively speaking in the sense that it was new and unexplored territory) I ran into the same problem as thousands of other people. “Where the hell did everything go?!” By Trial and error, and a little bit help from fellow members, I quickly managed to locate the spaces that most interested me. quickly, in the sense of “2 hours later”. I must say, once you have marked all the spaces and setup your preferences, it becomes a lot easier to navigate. It really pays of the effort to mold the site into something fit for you.

First annoyance: Where are the new blogs?

One of my favourite activities on SCN has been to check the list of new blogs and read through the ones that interest me. This is where my first annoyance lies. when you browse the content, you get to see all the latest activity. I’m not really interested in the latest reply on a topic about FI. I’m not interested in a typo correction on a blog from two months ago. I just want to see the newest blogs.

In order to get there, you have to browse the content, filter on blogs and change the sorting to “creation date, descending”. You could argue that it’s only 6 mouse clicks, but it’s 5 mouse clicks too much from a User eXperience point of view. Luckily, there is an easy solution: Simply bookmark a direct link towards the latest blogs, and you can land there directly from your bookmarks. 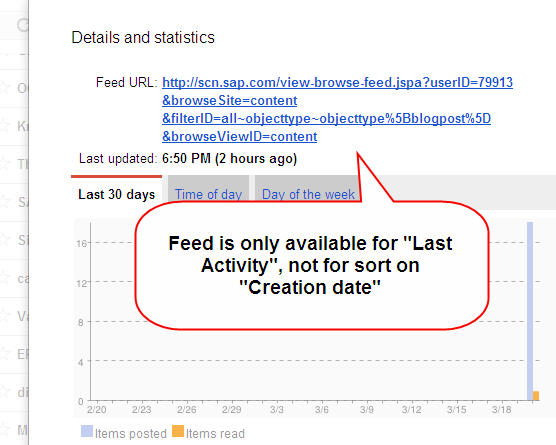 Once I had setup this bookmark, I was quite happy to flip through the new blogs and read up a little bit. To make things easy on myself, in the old SDN, I had an RSS feed which I consumed via google reader. I had noticed already that the old feed no longer worked in google reader, so naturally, I wanted to replace this with the new feed. What I noticed however, is that the sorting on creation date is not used in the feed. As a result, I see the same blogs popping up everyday in my reader, because the author has done an update, corrected a typo, someone liked it, or replied to it. Seriously, if I have read a blog, I don’t want to see it again the day after. Currently my feed displays over 50 “new” blogs every day. It’s a bit annoying. I have not yet found a solution. Adding the sorting parameter to the feed doesn’t seem to work, so maybe this is something that the SCN team has to pick up.

After flipping through the content and getting used to the new structure, I decided to not only consume, but to also actively participate. I set about to update all of my blogs and assign them to the right spaces. All of my blogs sounds like a heapload, but actually, it’s not that much, it just felt like it was an endless stream. The reason for this feeling is as follows:

When you open up your blog, correct some typo’s, update the tags, assign a new space and you then hit publish, the blog ends on top of the activity stream and also to the top of your own overview. Seeing as I started updating my last blog first, this created an endless cycle where eventually, the last blog ended up at the bottom again. Mindnumbed as I was by then, I simply opened up the same blog again, updated it, checked the tags, added some, published again… Endless cycle… 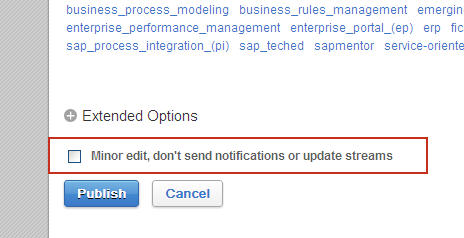 There’s a simple solution again: Sort your own blogs on “Creation date” instead of on the default “last activity date”. Alas, the system does not seem to remember my preference, so I have to do this over and over and over again.

In my opinion, it’s also not nice of me to push 30 somewhat blogs into the activity stream. The moment I realised that every update had this consequence was also the moment when I noticed the minor update flag. (which is basically the solution) Why is this flag “off” by default? 95% of all updates are minor. Is it not more logical to turn it on by default, make it a bit more eyecatching and leaving it to the user to explicitly state that he wants his update to appear in the activity stream?

While I was updating my blogs, I also noticed that any link towards a resource on SCN, had been updated to reflect the title of the resource as text. This resulted in very strange phrases in my blogs like: ‘In the article about the 5 top “top 5 trends of IT for 2012″ we notice…”. This is something that happened during migration so probably can’t be fixed anymore either; Luckily, the solution is simple, yet tedious. Go through all of your blogs, check the links and update the text whenever necessary.

Above are all minor annoyances with rather simple solutions, but for the small price of chewing through a bumpy start, we do receive a brand spanking new state of the art platform. I always like to share knowledge and opinions and trigger discussions. In that perspective is the greatest reward to me, seeing the reader count of my articles go up. To achieve this, I like to share a link of my blogs on several communities and platforms to increase my reach. Here we find one of the biggest improvements. Whenever I now post a link on Google+, Facebook or LinkedIn, the article is now shown with a small content and a thumbnail. I love it. 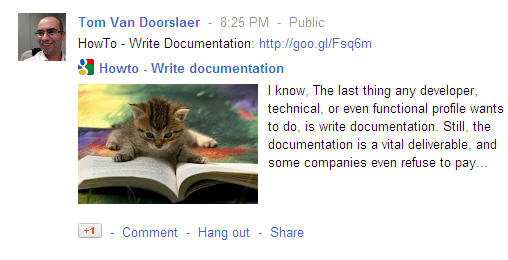 Sounds normal to you? Well it should be normal, but if you ever shared an article from ye’olde SDN, you would’ve noticed that you got a thumbnail of SAP, a title of “Sap Developer Community” and a content with Chinese characters.

The continuous flow of blogs, that should actually be forum posts (or discussions as they are called now)

SCN really has to come up with a solution there.

Regarding your hint in "First Annoyance: Where are the new blogs?": I have had the absolute same behaviour. In the morning, grab a cup of coffe and browse through the latest blogs, cross topic, I love to learn new things.

So I also missed this compact and quickly to reach page and I also set a bookmark.

What you missed to mention though is, that you can't do that via SCN's bookmark facility, but you have to bookmark it in your browser.

Similarly I think we all will create a number of bookmarks outside the platform (i.e. in the browser) to reconstruct a useful navigation suitable for us.

- Why actually do I have to create workarounds outside the platform to shortcut the unfortunate navigation which a happened to be more effective earlier?

- Using about five different devices to access SCN, I now also have to consider syncing my (browser) bookmarks just because of the unfortunate new structure (or non-structure) of the new site

I don't get it. But thanks for your good blog anyway,

Spot on. Why do we have to create workarounds?

I believe the above annoyances are not only my personal ones, but that many people find these frustrating. That's why I poured them in this article. On one side, it's feedback to the community, on how you can work around them. But on the other hand, I also hope that it's a feedback to the SCN team. And that they will pick up these issues and correct them for us. After all, I don't think the fixes for these issues are very complex (although I could be mistaking since I don't know the technical details)

The multi device one is another good point. I have the same situation, but I use Chrome on all devices, so my bookmarks are synced automatically. 🙂

Some nice pointers you got there.

What would help out is providing a link in this blog to one or more ideas you have placed on ideaplace. It will make it easier for community members to vote up your idea.