How to find and execute or work with other users quick views (or quick views created with old user-id)? 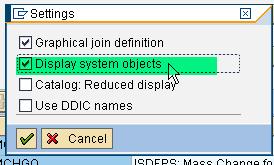 Activate “Display system objects”, and then press Enter to adopt the changes.

Make sure that your work area is set to “Standard area” in menu Environment > Query areas: 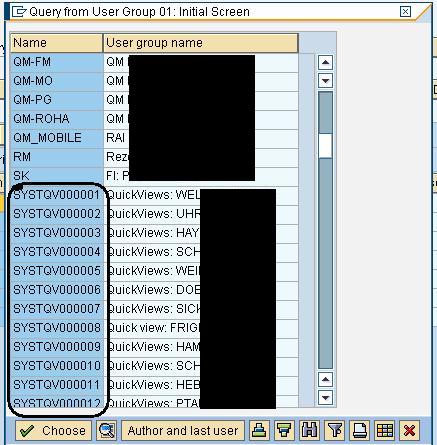 Each User has its own user group for Quickviews.

The name starts with SYSTQV followed by a sequential number. The user group name says Quick view followed by the User-ID

Thanks for the blog!  I haven't used the process that way.  Maybe you could do a follow-up blog on the reverse sometime.  I don't often have a need to use other people's queries but I have often written a query for either a user or a developer.  Sometimes to help the developers with the data set they need to use for a report under development, or for a user to review a prelimanary report under development.  Since a lot of environments are highly regulated such as my industry, (pharma), many wouldn't be a able to look up and run my query due to security.  Most of the clients I have had, only allow read access to most users for SQVI and never let them write their own queries.  That's limited to a handful of developers and support personnel.

But I, (or the appropriate person), can assign a user to my queries, (or anyone else's) using SQ03.  Once they have run it, reviewed it and commneted on it, I switch them back to their original query group.

It's a very similar process to what you explained just from the opposite direction.

Good idea, just tested it an it worked well. I will extend the blog showing this alternative.

We had the problem that one guy had created a quick view to extract data for migration. Then he became sick and we needed to execute this quick view. So he was not able to add actively a user to his quick views.

The usage is very restrictive in our company as well. But it was not meant for endusers, I had consultants in focus.

I knew you did, (have consultants in mind).

The illness thing could very easily come in play during a project!  I'm going to keep that in mind!

This question has been asked many times and this is the first time it has been correctly answered. Most "correct" answers claim that it is not possible.

How can we restrict SQVI to Execute only option? I have created some roles to make it execute only, but I CAN still create query and able to save them as well. Need some input - if any one can.

I dont think there is any authorization setting for this. As you can see from this blog it is quite tricky to get to the quickviews of another user.

Thank you sir for the quick reply. I really appreciate it.

Thanks a lot for your help !

It seems like user who would like to run someone else's query is supposed to have authorization for query maintenance (S_QUERY-ACTVT = 23). Otherwise other user groups remain invisible for him/her.