iPads have been an incredible tool for salespeople. Companies like IBM, Genentech, General Mills and SAP have deployed thousands of iPads – and reaped the financial benefits.

Most of the beneficiaries have been in the B2B arena. Not surprising, as B2B dwarfs B2C by a huge margin. But retailers are starting to catch up.  Sears, for instance, is arming 5,000 in-store salespeople with iPads. And ADT is arming all 4,000 of its salespeople with iPads. Their full strategy, though still being realized, will be impressively integrated when it is realized later this year.

Half of ADT’s salespeople, who still visit homeowners in their homes albeit usually after a customer inquiry, dumped their presentation folders in favor of iPads five months ago. The iPad helps the salespeople in four ways today, said Joe O’Connell, vice-president for residential direct sales at ADT, in an interview last week.

First, the iPads allow ADT’s salespeople to demonstrate the ADT Pulse mobile app. Running on iOS devices, BlackBerries and Android, ADT Pulse is the company’s full-fledged move from the increasingly  narrow market for home security to the broader area of home automation and smart homes (or what ADT’s marketing team prefers to call “lifestyle management”). 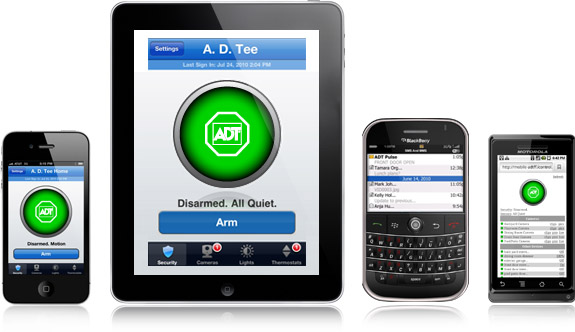 Besides letting homeowners monitor their house security from far away, ADT Pulse also lets them control their heaters, lights, video cameras and indeed any electronic gadget or outlet that has Z-Wave wireless technology. The app is already used by 105,000 homes today, O’Connell said.

Salespeople use the iPad 2’s camera to take pictures of the electronic devices in the home they may want to connect to the Pulse automation system. These pictures are transmitted back to the office, and augmented with voice notes about the house from the reps transcribed by the Dragon Dictation software.

Finally, the salespeople use the iPads to show what the neighborhood crime statistics are, said O’Connell, a key tool for helping to convince customers of the need for an ADT system.

So what’s the ROI?

According to O’Connell, ADT salespeople are cutting time it takes for them to present to potential homeowner customers by 30% – from one hour to 40 minutes or less. Not only does that make it less hassle for the customers, it enables its salespeople to make correspondingly more sales visits.

“With the iPad, the product really sells itself. All we have to do is just put it in the customers’ hands,” he said.

Training for the salespeople only took a total of 8 hours, O’Connell said.

Sales managers like himself have access to a dashboard that lets them get a top-level view of sales, into which they can drill down all the way to the individual salesperson level. The data is refreshed daily, O’Connell said.

As a security company, ADT naturally has made sure the 3G-enabled iPads are controlled from a mobile device management (MDM) perspective. They are managed using both MobileIron and Soti Mobile Control, which provide password protection and remote wipe if lost.

So what’s coming that’s so impressive? First, ADT expects to have all 4,000 salespeople using iPads by May. Second, it plans to deploy two more apps – a pricing configurator, and the ability to take electronic signatures. This will allow reps to quickly show different ADT systems and options and let customers sign their contracts all using the iPad.

This will let ADT’s salesforce go 100% paperless, boost their productivity and sales results.

Interestingly, O’Connell doesn’t see the need for ADT’s salespeople to adopt the new iPad, saying that the screen, connectivity and camera of the iPad 2 are plenty capable for what they plan to do in the near future.

“Our guys are mostly fact finding, so the new iPad is not super necessary,” he said.

Two Men Enter, One Man Leaves: Enterprise Mobility Forum founder Philippe Winthrop and myself will stepping into the Social Media Thunderdome known as the SAP TweetChat next Friday, March 28 at noon ET/9 am PT.

If you caught our first Tweetchat last summer, then you know that Philippe and I aren’t shy about mixing in jokes and verbal body slams amidst some hopefully-sensible advice for businesses going mobile today.

Look for us, again, to agree to disagree on hot-button topics such as:

– the new iPad – a big boon or a big headache for businesses?

– the coming $149 Google Nexus tablet – iPad-killer or as DOA as the Nexus smartphone was 3 years ago?

– what is the best way to COPE with the issues created by BYOD (Bring Your Own Device)?

Ask your questions and debate with us next Friday at noon ET via the hashtag #SAPchat or log into the Tweetchat room. And click on the above link to add the event to your calendar!