What is the Remote Support Component?

If you’ve been an administrator of Business Objects Enterprise for a while like we have, then there are a few big questions you regularly get asked and until now have had no good answers for.

What’s going on inside of Business Objects when I run a report? Which step in the process is taking so long?

How do I know when something bad is lurking in there?

The answer is a relatively new offering by SAP called the Remote Support Component, or RSC for short. While SAP won’t win any awards for naming, this product packs some serious punch where it matters; functionality.

If you’ve been around the traditional SAP side of the house, then you’re likely familiar with the Solution Manager tool. SolMan is a big investment in time and effort, but certainly gives some revealing information on system operations. Remote Support Component was meant to give some of the same Solution Manager functionality to Business Objects only customers.

While easier to set up than Solution Manager, the RSC install process is not exactly easy. Take your time and read over the install guide a few times, and do a practice install on a dev box before you head in for Production. Once you give it a try and get familiar with the terminology, it’s not too terrible. Like most monitoring tools, RSC has a central monitoring application, and then remote agents on the nodes you want to monitor. In RSC terminology, the central monitoring application is called the “Managing Host”. This is where you will install the actual Remote Support Component application, and Wily Introscope Manager. These two tools come with the install media and the instructions are pretty solid. The servers you want to monitor with RSC are called “Managed Hosts”. These will get two pieces of software installed on each. The first is the RSC agent, (amusingly called a Solution Manager Diagnostic (SMD) Agent) and the other is a Wily Introscope agent. Again, both are covered in the RSC install guide. For an order of events, first you’ll install your Managing Host and get that all set up and talking to the SAP Service Marketplace. Then you’ll install and configure your Managed Agents. Last but not least, you’ll run the Configuration Wizard in the RSC application and “identify” your new Managed Agents. That’s pretty much it. Totally oversimplified for the sake of this blog, but you get the picture. Then the fun begins!

The Remote Support Component (RSC) does part of the work for you. By properly configuring your systems with RSC monitoring agents, the RSC can collect information about the operations and configuration of your system. It uses your Service Marketplace account, and will send this information back to SAP, who will then create an Early Watch Alert report for you. This is where all of the things that might be lurking in the system can come to light, hopefully before there is an issue. It gives you some expert insight on your BOE system health. This part is fantastic for the busy BOE Administrator because it’s passive. Once RSC is set up, it will dial home periodically and you’ll get the Early Watch Alert reports right in SMP. Nothing further is required. 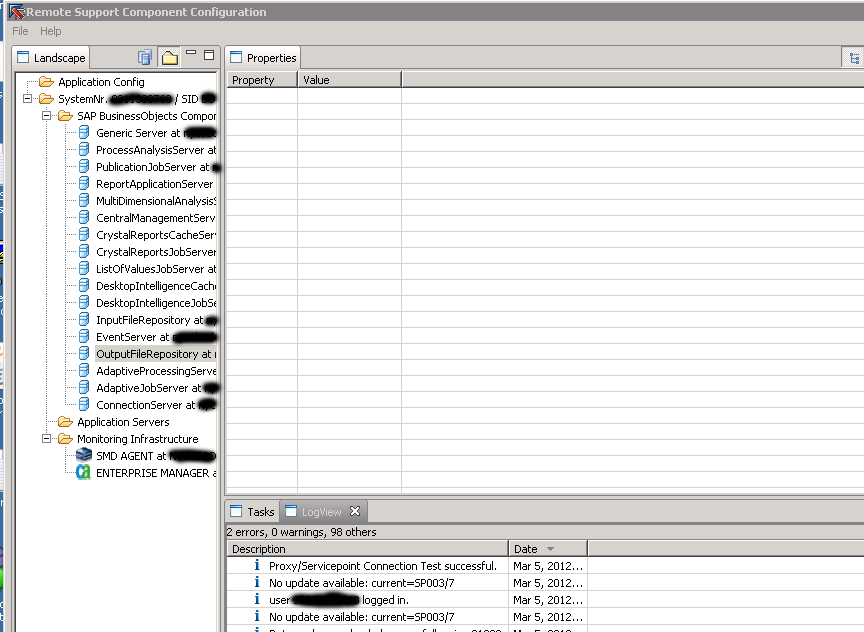 But when things are going awry, you’ll want to take a more active role with this tool, and that’s when you’ll want to switch over and use the Wily portion of RSC.

Wily is a pretty well-known industry standard monitoring tool. It is widely adopted because of it’s really powerful capability to give visibility to what applications are doing under the hood. Traditionally, Wily did not work when run against BusinessObjects Enterprise. Those days are over. While it can only monitor the java portions of BOE, that is a TON of information you can get. And the best part, in my opinion,  is the Transaction Tracer. This is where you can get visibility into every step of the processing workflow. If a report is causing an error, you can turn the Transaction Tracing on, run through the problem report, and trap a ton of great information about what specific part of the system is breaking, and why. You can also combine your Web, App, Intelligence, and Processing tiers into one big workflow and trace the work across hosts. It’s quite impressive, and something that has been asked for for a long time. SAP has been really excellent with listening to customers about this need. RSC is offered free of charge to every customer with an active support account.
Currently RSC only supports Business Objects XI 3.1. The BI4 version is coming soon, I’ve heard. Another mention-worthy tidbit is what Wily can and cannot do in this version. This is not the full version of CA Wily you would buy from Computer Associates. This is an OEM version that SAP has licensed, and has limited functionality. The limit is on the Alerting mechanism. The full version of Wily has the ability to throw alerts based on your watch rules and notify administrators or operators. This version of Wily does not include alerting, but I have heard you can purchase a key to unlock it from SAP. But free is free, so if the monitoring part is enough for you, you make out on the deal.

Here is a video produced by SAP that highlights some of what RSC can do.

Being an SAP Business Objects Administrator just got a whole lot easier. SAP did a fantastic job giving admins some major upgrades in tools by rolling out the Remote Support Component.

This article is intentionally cross-posted from our company site. My intention was to make this information available to a wider audience.