Guide towards a simple conversion of an XML file to ABAP Internal table, using XML parsing.

Guide towards a simple conversion of an XML file to ABAP Internal table, using XML parsing.

This article elaborates the conversion process of an XML file residing in the SAP Application server, into an ABAP internal table.

An effortless approach, unlike the other intricate methods available for conversion, has been presented here. In this particular concept, initially, the XML file is converted into a string. Hence, we use the XML parsing technique to convert that string into an ‘x’ string and finally into an internal table.

A simple conversion idea, along with the supporting code blocks, has been demonstrated in this document.

Aastha Mehrotra has been engaged with Larsen and Toubro Infotech for two years and three months, her acquaintance with the IT industry being the same.

The author has worked on various projects in SAP with ABAP. She is also trained in a couple of other ABAP technologies like WebDynpro for ABAP and Workflows. However, the milestone in her career by far, has been her distinguished work in the field of Data Extraction from MDM to SAP R/3.  Aastha did a major research on retrieving flat as well as lookup data from MDM into SAP R/3 system, using the MDM ABAP APIs. She also applied her know how on MDM ABAP APIs, in two implementation projects. She has also imparted trainings on Setting up connection between MDM and SAP R/3 as well as Extracting data from MDM to SAP R/3.

Various practices and procedures are available for XML-ABAP conversion. However, I discovered that, none of those takes us entirely across the process of converting an XML residing in the Application Server into an internal table in ABAP. Certain other methods, which might actually take us across, are difficult to comprehend and involve a number of complicated steps.

This document shall let you know the entire process involving the evolution of the XML file in the Application server to an Internal Table.

Following is an archetype of the XML file which needs to be converted into an internal table in ABAP.

This XML file carries data for three fields- HomePernr, UNAME and USERID. We need to convert the XML file into an internal table comprising of these three fields, and holding the three records from XML.

We would be considering the example of the following file through the course of this document. This would assist us convert any XML containing any number of fields and records into an internal table, in an uncomplicated manner. 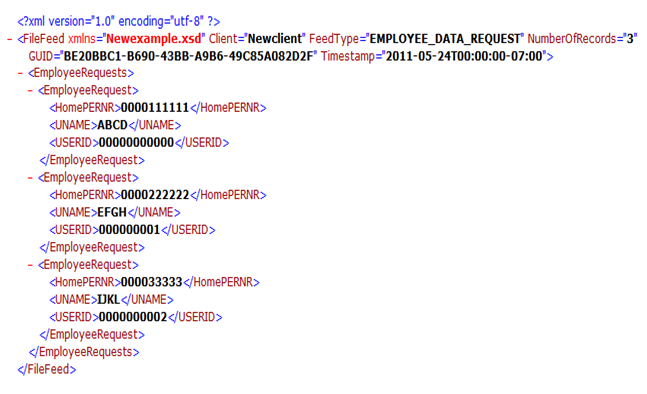 Note: FileFeed happens to be the root node for the XML.

EmployeeRequests is the element node containing the separate Employee records within it.

Employeerequest is the element node for each record.

HomePERNR, UNAME and USERID are the value nodes containing the values for the records.

Step wise conversion of the XML to Internal Table

The entire mechanism would be elaborated by this document in several steps, supported with the appropriate code snippets.

The series of execution would be as follows:

Note: The code snippets are actually parts of a single code, in a sequence. Hence, these can be conjoined together to achieve the entire code for XML_ABAP conversion.

We shall advance with the specification of the step wise conversion process. However, we must be aware of the variables to be declared, in advance. This would enhance our understanding of the steps and would provide clarity to the context.

Type declarations for the variables

Following are the declarations for all the variables to be used in the code snippets throughout the document. This would help us avoid all the confusion pertaining to the type of variables used.

The first breakthrough would be to open the XML file and read the data using the OPEN DATASET statement.

The addition IN TEXT MODE, to the OPEN DATASET opens the file as a text file. The addition ENCODING defines how the characters are represented in the text file. While writing the data into a text file, the content of a data object is converted to the representation entered after ENCODING, and transferred to the file.

We use the READ DATASET statement to read the data from the file.

Next, we move the lines of the internal table into a string. Hence, we get a string containing the data of the entire XML file.

We need to convert the string thus formed into a ‘x’ string or a hexadecimal string using the function Module ‘SCMS_STRING_TO_XSTRING’.The type xstring allows a hexadecimal display of byte chains instead of the presentation to the base of 64.

In case we have an XML string that needs to be converted into an object, then the XML string needs to be parsed. The parsing would convert the string into a table. The internal table that would be returned is g_t_xml_info. G_t_xml_info is of type SMUM_XML_TB. The structure for SMUM_XML_TB is in the screen-shot below: 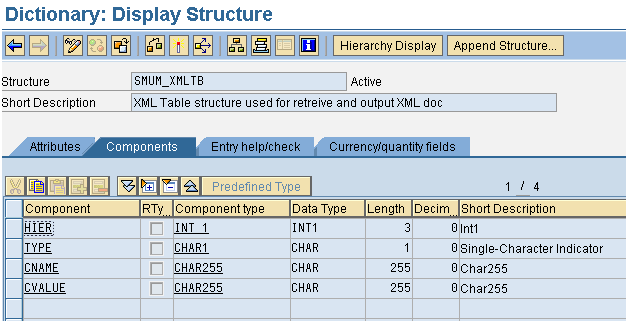 The table SMUM_XML_TB has four fields: HIER, TYPE, CNAME and CVALUE. The XML data would be transferred into the four fields.

Moving forward, we would come to know that how exactly is the data allocated to the fields of this table?

We are acquainted with the fields of table g_t_xml_info HIER, TYPE, CNAME and CVALUE.

Let me elaborate about the values held by the table g_t_xml_info.

1. Values held by the field HIER in XML table

The field ‘Hier’ would hold the value ‘1’ for the element in the root node. Since, Root node is the first level of the XML hierarchy.

It would hold ‘3’ for Element nodes at the third level of hierarchy in the XML file that is EmployeeRequest here.

The value would be ‘4’ for all the Value nodes.  Here the value nodes would be HomePernr, UNAME and USERID.

Hence, we conclude that the value of ‘Hier’ depends upon the level of hierarchy that particular node holds in the XML file.

2.  Values held by the field TYPE in XML table

The value that the field ‘Type’ holds for all the elements in the Header of the XML file would be ‘A’. It would be ‘V’ for the value nodes. For all the other nodes, it would hold a blank.

3. Values held by the field CNAME in XML table

4. Values held by the field CVALUE in XML table

Cvalue contains the values held by the elements of the various nodes of an XML file.  Taking an example of our case here-

For HIER ‘4’ the Type would be ‘V’, Cname can be ‘HomePernr’, ‘UNAME’ or ‘USERID’ and the Cvalue would be the values held by these records.

Here is a screen-shot of the values contained in the table g_t_xml_info, considering our example. 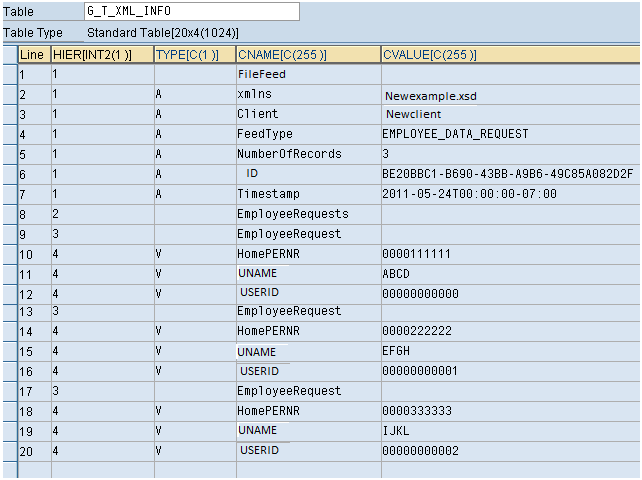 Now that we are acquainted with the pattern of values contained in g_t_xml_info, we can move these values to the required structure.

We require only the values contained in the value nodes and we have to transfer these to their respective fields i.e. HomePernr, UNAME and USERID. Since, we need the values only for the value nodes we can directly move the values in the final table for a value of HIER equal to ‘3’.

Note: The value of HIER for which we need the data, can be manipulated in accordance with the position of the value nodes in the hierarchy of XML.

We use the following code snippet to move the data:

Here, the value ‘3’ for the field ‘Hier’ marks the beginning of a new record. Hence, we move the values to the g_t_employeerequest table whenever the value for ‘Hier’ is ‘3’.

This way we get the required values in the internal table g_t_employeerequest. 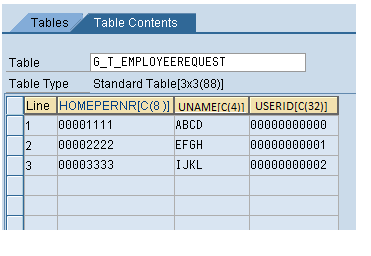 Thus, we get the values in our desired structure. We populated the final table in accordance with the location

This marks the end of our journey from the XML residing in the application server to the internal table in SAP ABAP.

Parsing an XML and Inserting to ABAP 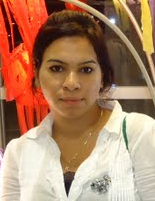