Every PP, FI and CO user in any Manufacturing Industry will be having a tough time while processing month-end activities. Production Order Variance posted against each process orders will have to be examined, explained & investigated thoroughly. Major questions arising will be;

Answering these will be really tough.

We have faced all these scenarios and after months of deep research in this field I came across few conclusions.

For better understanding I will divide this blog into two categories;

Now let us examine the main points under Category A:

The ultimate end point of any industry is sales. For selling the product several process has to be carried out. The success of any management depends on how well they forecast the sales, plan and schedules the activities. 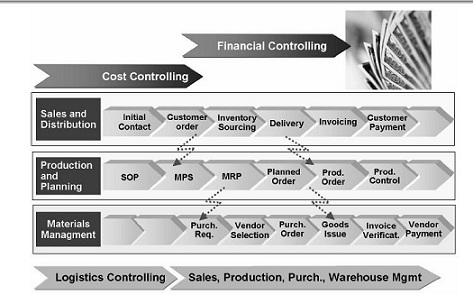 Let us divide the process as given below;

Forecasting the sales for future. Sales and Operation Planning, Long term planning, Cost center planning should be well executed by the management.

The major points to be considered here are;

All the required information to manage a material.

Collects actual costs during the production of a material.

Recipes comprise information about the products and components of a process, the process steps to be executed, and the resources required for the production.

Overhead rate is a percentage factor applied to the value of the calculation base (group of cost elements).

During Overhead calculation, a manufacturing order in product cost collector is debited, and a cost center is credited. The credit key defines which cost center receives the credit.

The cost component split allows a cost estimate to group costs of similar types of components, such as material, labor, and overhead.

The costing variant contains information on how a cost estimate calculates the standard price.

The Standard Cost Estimate is involved in variance analysis because it is used for stock valuation. When a production or process order delivers production to inventory, it receives a credit based on standard price. Total variance is the difference between actual costs debited to  the order and costs credited to the order due to deliveries to stock.

The  Preliminary Cost Estimate is involved with production, variance calculation and valuating scrap variance and WIP.

If there are different procurement alternatives for the same material, such as two production lines or two vendors, mixed costing can be used when inventory valuation has to reflect the mixed procurement costs.

Actual Cost can be divided into two groups based on the posting origin;

Primary cost will be posted to CO mainly in the following scenarios:

When goods are issued from inventory, a general ledger balance sheet account is credited, and profit and loss consumption (expense) account is debited. A primary cost element with the same number and identifier as the inventory consumption is usually created in CO during initial system implementation. When the system detects a corresponding primary cost element in CO during a posting to General ledger expense account, a posting to CO cost object is also required.

Primary Cost are posted to CO from FI.

The credit value is calculated by multiplying the finished goods standard price by the quantity delivered to inventory.

At period end the production order receives a secondary credit that is equal to the variance during settlement, resulting in zero balance.

During the settlement process, product cost collectors and process order variance are posted to Profitability Analysis (CO-PA) and FI.

Total Variance is the difference between total production order debits and credits.

Variance calculation at period end divides the variance into categories, based on the source of the variance.

Production Variance settled to CO-PA are included at the gross profit margin level.

5.1 The three common types of variance calculation are as follows;

Total variance is the difference between the actual cost debited to the order and credits from deliveries to inventory. Total Variance is variance relevant to settlement. The variance is settled in Financial Accounting (FI), Profit Center Accounting and Profitability Analysis

Production variance is the difference between net actual costs debited to the order and target costs based on the preliminary cost estimate and quantity delivered to inventory.

Production variance is not relevant for settlement, only for information.

Planning variance is the difference between costs on the preliminary cost estimate for the order and target costs based on the standard cost estimate and planned order quantity.

Input variance is divided into the following categories during variance calculation, according to their source:

Input price variance occurs as a result of material price change after the higher level material cost estimate is released.

It occurs in any of the below mentioned scenarios;

Resource – Usage variance occurs as a result of substituting components. This could occur if a component is not available, and another component with a different material number is used instead.

Input quantity variance occurs as a result of a difference between plan and actual quantities of materials and activities consumed.

When input variance cannot be assigned to any other variance category. 5.2.2) Output Variance

Variance can be from too little or too much of planned order quantity being delivered, or because the delivered quantity was valuated differently.

Mixed-Price variance occurs when inventory is valuated using a mixed cost estimate for the material.

Output price variance can occur in the following scenarios;

1)      If the standard price is changed after delivery to inventory, and before variance calculation.

2)      If the material is valuated at moving average price and it is not delivered to inventory at standard price during target value calculation.

Occurs if variance cannot be assigned to any other variance category.

The most important period-end process relevant to production order variance analysis is;

Variance can be calculated using the formula;

Settlement of Production Orders will be executed.

Now let us examine the main points under Category B:

Now you will be having a basic idea about production order variance , variance calculation types & various categories. Now let us try to co-relate this with real life scenarios.

I will divide the topic into below mentioned sections;

2.    Major Reasons for the variance

3.    How to minimize the variance

Category B.1) How to analyze variance posted against production order

Master Recipe of SFG1 is;

Variance Posted against the Process Order for the month is 128,190.87 AED

For analyzing the variance in detail we will use transaction codes KKBC_ORD & KOB1.

Let me explain difference between KKBC_ORD and KOB1.

KKBC_ORD is used for analyzing single order. Planned and Actual cost details relating to the production order will be recorded in KKBC_ORD.

KOB1 you can execute for single as well as bulk order. KOB1 provides the “Actual” values (cost & quantity) of raw materials and overheads used for the production of the material. 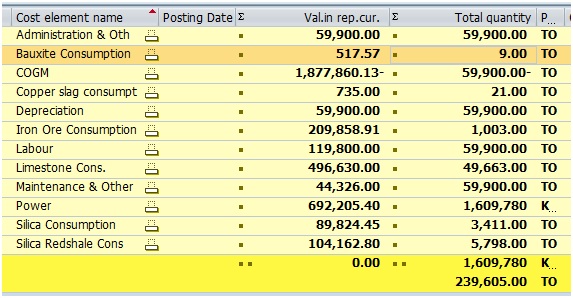 I will explain how we are calculating the variance.

Below table shows the formula used for Variance Calculation.

All the Std. Rate, Std. Qty, Std. Cost value fields in Table 4.0 are calculated based on the master details (Material Recipe Figure 2.0).

All the Actual Rate, Actual Qty. Actual Cost vale fields in table 4.0 are extracted from KOB1.

Now let us fill in values in Table 5.0 with the production order values.

Now let us categorize the variance.

Variance has been posted in the following order

Let us try to calculate Variance by applying Formula for each category.

Category B.2) Major Reasons for the variance

From My experience I can point out that Production order variance occur mainly from;

Let us try to analyze all the scenarios.

a)    Material BOM not updated properly

Explained in Category B.1

Explained in Category B.1

Total POWER consumption as per KOB1 (Actual as per Material Recipe) and FBL3N should be approximately equal.

c)    Standard Cost estimate released for one production version and confirmation done against another production order.

Costing run executed for one Production Version and Process Order created against another production version.

Let me explain with an example;

Process Order has been Created Under production version “PO32”

The Activity Price recorded in system against “PO32” is as follows

After Settlement (For 1000 TO of FG1) entries will be in the following sequence;

Similarly for all the Material and resources.

In order to avoid the Over head Variance input same activity price for all the production versions,

When a Process order is created for Material FG1 system calculates Planned cost as follows;

Use the same calculation logic used in Table 1.0;

We came across this production order variance in few process orders only. While doing final confirmation of process orders user made mistake by not allowing system to re calculate the activity prices.

The total quantity produced is 8,865.00 TO against which the activities booked are;

Since during final confirmation of the Order, re calculation of activities were bypassed (by user) system calculated the activities against the production order as below;

Note: While doing final confirmation ensure that all the activity prices are recalculated as per the new output.

e) Variance Due to Price change

b)      Activity Price should be Updated periodically

d)      Try to ensure that process order for Finished Good is created on the same production version released in standard cost estimate.

Variances posted with document type “SA”, “AB”, should have been part of COGM, COGS and Closing Stock. Because of variance material movement cannot be analysed correctly, material value can either Overestimated or under estimated. In order to figure out how much portion of variance should be allocated to COGM,COGS & closing stock We are following manual calculation.

Step1: List down all the Semi Finished and Finished Goods.

Thanks all for the support. Happy to know it helped.

Though I haven’t worked on Product costing, COGS & variance but after reading this excellent document I am thinking that I should start to learn.

I really appreciate that people are putting great efforts for others & definitely your effort helped us.

Thanks for sharing your knowledge.

Thanks and Great to know the document helped

Can I ask about the Settlement of Production Orders?

Amazing and very simple explanation, thanks for your  post,

What are the system solutions to flag significant variances in the production orders before releasing or finishing the orders just to control the posting to GLs and ease the financial closing?

I have one question. we want to post activity type wise variance in the GL. currently system is posting one entry for total figure. so if i have 2 activity than want to post 2 entry for variance. is it possible to do so? & if yes how to do that configuration to split in GL.

Hello Ranjit. I would like to understand what is the reason of the variance I have in some orders like this? Always it show it as a "FACTORY OUTPUT FROM PRODUCTION ORDERS" but is not clear to me why it is causing variance. Could you help me to understand what happed with these orders: