This document provides details on how to configure fiscal year variants in SAP and explains various options which are available to cater to business requirements e.g. Calendar Year as fiscal year, shortened fiscal year or fiscal year variant where the posting periods do not correspond to calendar months.

The fiscal year is a time period used to prepare the financial statements in organizations. Based on the business needs some organizations have fiscal years which start from Jan to Dec and some Apr to Mar etc. Fiscal year can be further divided into shorter time frames which can be months which are referred to as periods.

However when posting periods are defined there can be different scenarios, based on which the periods need to be defined in SAP:

The document aims to provide details of the configurations required to define the posting periods for the above scenarios.

The configurations for the fiscal year and corresponding period details can be done in SPRO settings as per details given below:

Scenario 1:   Fiscal Year of organization is same as Calendar Year

In the OB29 initial screen as given below we would need to click on New Entries.

In the new entries screen a new fiscal year variant (it has to be unique) has to be defined, details to be provided are the description and the indicator Calendar Yr needs to be checked. The changes have to be saved.

When organization follows a Non calendar year fiscal year, the posting periods need to be defined by assigning ending dates to each period. It can have between 1 to 16 posting periods. If the non-calendar year does not start at January 1st the periods of the year which belong to the former or the coming fiscal year must get an annual displacement indicator (-1, +1).

To start in the OB29 initial screen as given below we would need to click on New Entries. In the new entries screen the details to be entered are Fiscal year variant, description and the no. of posting periods and special posting periods. The changes need to be saved.

User would then need to go back to the main screen of OB29, and select the new fiscal year defined earlier and double click on Periods and enter the details as given below.While defining the periods in the example below assumption is organization uses Apr to Mar posting periods.

The configuration needs to be to cater to the fact that the months which fall in the next (Jan to Mar) needs to have a year shift indicator -1 maintained as given below.

Another point to note is the day limit for February should be 29 to be prepared for leap years. 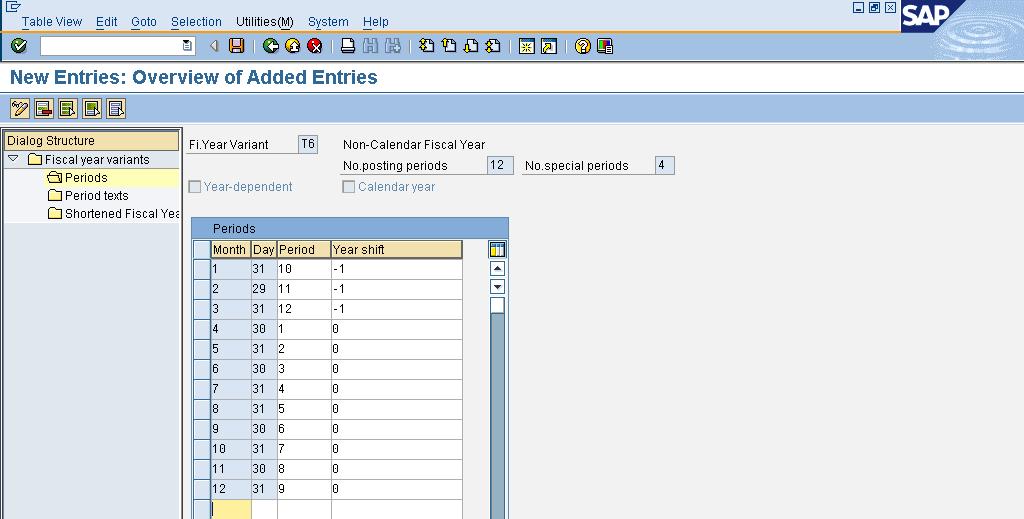 and it was not compounded with Fiscal Year Variant.

So would you suggest this compounding to always be there?

Hello Rashmi, As far as I understand, the above document explains the FVY in Financials and not the BW scenario as I can understand from your question to the author. I hope I am right !

As correctly pointed out by Suresh the document for fiscal year variant is for SAP FI. However the compounding which you have mentioned is correct for BW scenario.

is there a situation or a scenario where we can use only 12 posting periods without needing the 4 special posting periods. My assumption was we need them whether we use full 12 regular +4 special or shorten the fiscal year like 8 posting periods and use the rest 4 for special.

Would there be a business case or situation where you will never need the special posting periods?