Improvements in features of Workstatus in BPC 10 NW

This blog details the key improvements in the features of workstatus functionality in Business Planning and Consolidation 10 NW.

Workstatus in Business Planning and Consolidation is a standard functionality used for defining review and approval process for data in any business scenario based on the concept of data slicing. Workstatus in BPC 7.x NW and BPC 10 NW though works in the same way, Workstatus in BPC 10 NW has few improvements with respect to the user Interface, warnings/error messages when we configure it in the system and integration with other features like Controls.

These delta changes we have with this functionality in BPC 10 are detailed below in this blog,

Controls is a new feature available in BPC 10 NW which performs more likely the same function of Validation Business rules in BPC 7.x NW but with good insight and integration with the process.

The status of Controls in the Model now plays a vital role in setting Workstatus of the system.

When the controls status for a specific entity is failed as below,

And if the user tries updating its workstatus, it will not proceed but highlights the error due to the status of Control in the system as shown in the screen below, 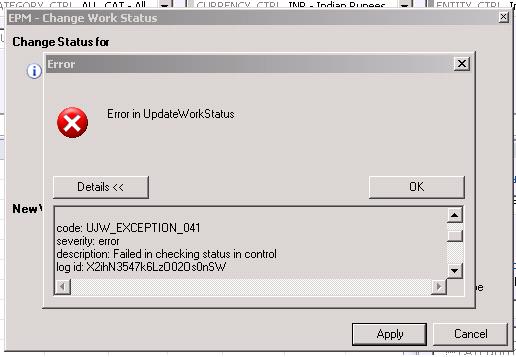 This gives a tight integration of the process in the system.

Worstatus in BPC 7.x NW displays all the available states in the system which is defined at the Appset level. This creates confusion for business in understanding the process flow and setting the workstatus.

Whereas with BPC 10 NW  this problem is overcome by displaying only the relevant workstates for the users.

*TEST_WS – Owner of US, Manager of US and IND

When the user INF122334(Owner of IND) tries to set the workstatus for US his screen looks as below stating that he is not authorized to update workstate for US. 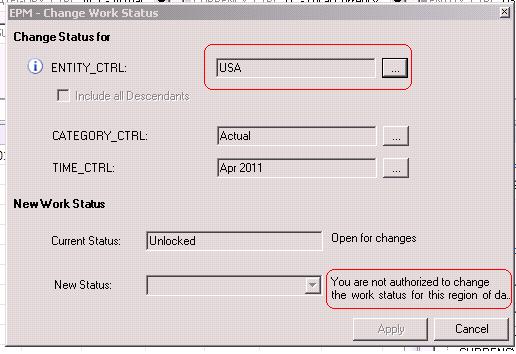 When user INF122334(Just an Owner) selects his Entity, he can see only his available state that is Submitted. He will not see the work state “Approved”. 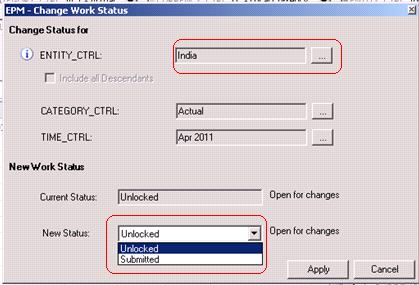 When the user TETS_WS connects to the system, being a manager he can see all the workstates available for him as shown below. 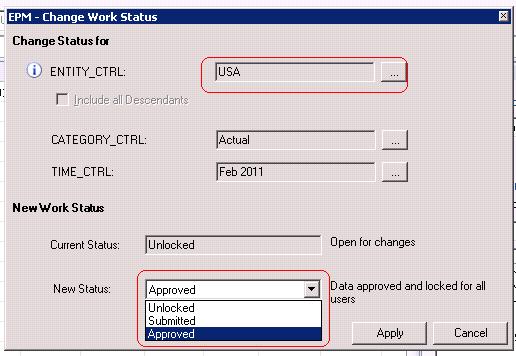 When user INF122334 tries updating the workstatus of his entity(IND) after his manager has approved the process, he will not be prompted for any update all interface will be locked as below, 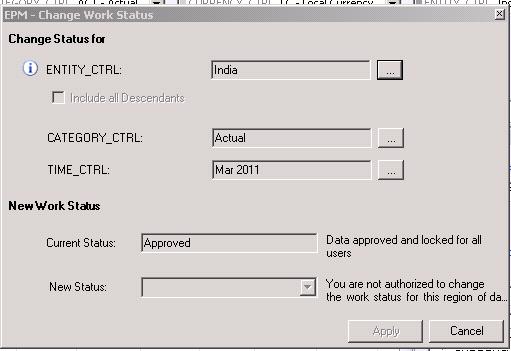 Configuring workstatus in BPC 10 NW has become more easy and system driven. We get clear error messages and warnings when we miss the required parameters.

When we don’t have Owner Property in our dimension and Hierarchy in that we get the below error which asks us to maintain them.

When workstatus setting is selected from an input sheet or report, based on the cell which is selected in the report, the members for the workstatus will be automatically defined accordingly.

Below the cell corresponding to Jan 2012 for India is selected in the report and when the Change Workstatus is opened values for Entity and Time are selected automatically based on the cell selection in the report. 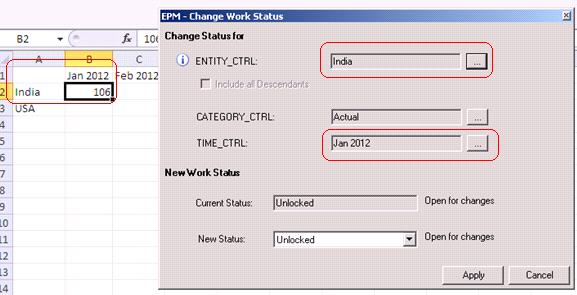 Hierarchy used for workstatus can be set in the screen where workstatus dimensions are defined, Need not maintain any web parameter(APPROVALORG) for this separately as we do in BPC 7.x 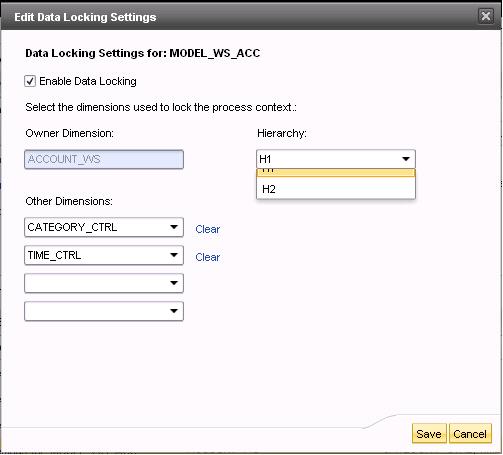 Note:All the members in Owner Dimension should have value for OWNER Property.

This blog has detailed various improvements we have in Workstatus for BPC 10 NW. This helps any BPC Consultant to understand the deltas of Workstatus in BPC 10 NW and set right expectations to the business users in about this function.

One of the best document on work status.