People working with SAP Solution Manager Implementation Projects and Change Request Management (ChaRM) are probably used to set up authorization object S_PROJ_GEN to control authorizations in project functions such as lock blueprint, assign logical components to the project landscape, create and assign task list to a project. These functions are currently well documented rather in SAP Notes, SAP Solution Manager Security Guide or here in SCN. Authorization object S_PROJ_GEN has the following fields:

Those users working with Quality Gate Management, specialy in SolMan 7.0, can face some difficulties to understand how to set up this authorization object since there is no documentation explaning the meaning of the new PROJ_FUNC codes related to QGM. QGM functions such as Create Change, Create Transport Order, Release Transport Order, Reassign Transport Order and so on have a corresponding PROJ_FUNC field to allow the user to define who can do each task in the QGM webdynpro.

SAP Solution Manager Security Guides for 7.0 and 7.1 mention the standard roles relevant for QGM. There are four standard single authorization roles in SolMan 7.0:

SolMan 7.1 has the above single roles and some more.

There are composite roles in 7.1 for QGM:

These roles in SolMan 7.1 have many authorization objects not used by QGM before because release 7.1 included new functionalities such as a new CRM transaction type called SMQC (QGM: Change) and SMQU (QGM: Urgent Change). They use authorization object S_PROJ_GEN with default values for project function field PROJ_FUNC. If you need to create your own role to distribute the different activities to different people or group of people, instead of using only the standard roles, you will need to understand the meaning of each PROJ_FUNC field. You will find listed in the SAP Security Guide for 7.1 some of the new fields (not all) created for QGM, but will not have any explanation of what they mean. In the SAP Security Guide for Solution Manger 7.0 SP23 these new fields are not mentioned. 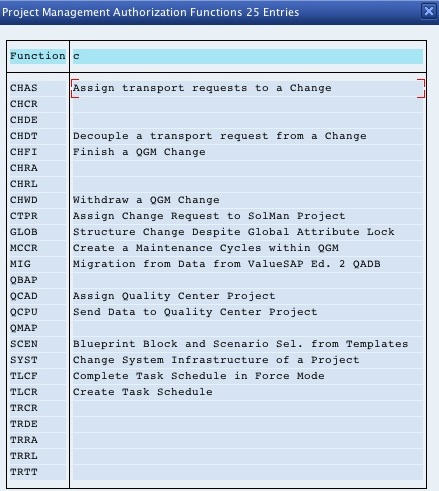 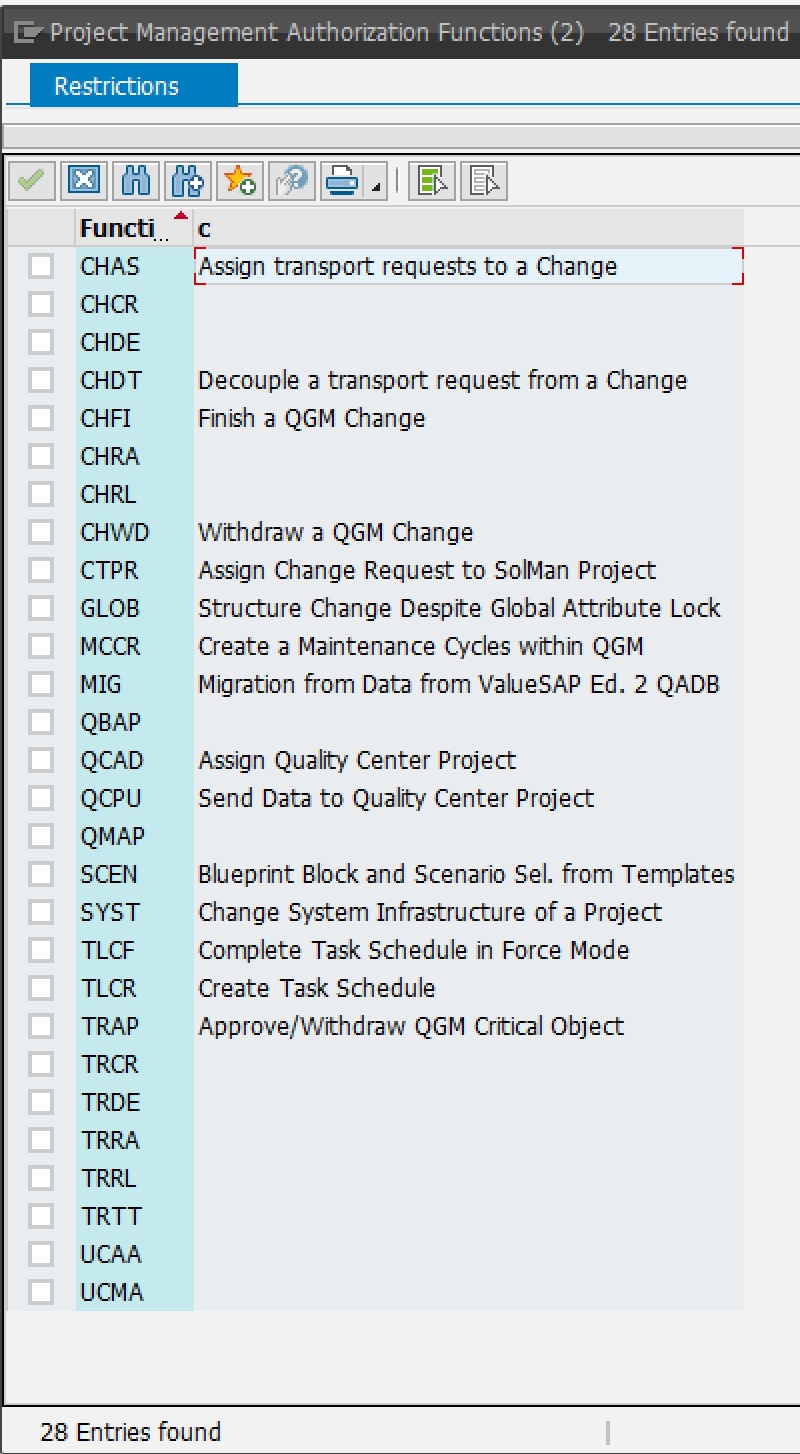 Table below shows the description of each field value related to QGM and whether they are related to SolMan 7.1, including new fields already considered in the QGM authorization routines in SolMan 7.1, but not yet included in the list of existing entries for authorization object S_PROJ_GEN, at least not in SolMan versions that I checked. If someone using a different SolMan Support Package finds these missing field values, please leave a comment.

If you check Figure 2 you will note that 3 values listed in the table above are missing in the list of entries: TRAS, TRDC and TRTP. But they are included in standard role SAP_SM_QGM_TRANSPORT for SolMan 7.0 SP23 and SolMan 7.1 SP03. TRAS (Assign Transport Request) and TRDC (Decouple Transport Request) are not available functions in SolMan 7.0 QGM and the source codes for authorization checks do not consider them, so they are not relevant in this SolMan release. In SolMan 7.1 they are all being checked.

In SolMan 7.1 SP05 two new functionalities were added to QGM: Approve/Revoke Critical Objects and Set/Unset Import Lock. The corresponding value for Import Lock (TRIM) is not in the PFCG list either, even in SP10, but it was included in the standard QGM roles.

If you want to check the source code of authorization routines, go to transaction SE24 and check class CL_TD_AUTHORIZATION.

It's great to see you are blogging on SCN 😎 .

Getting the authorizations right is important and often a challenge within a project.This will certainly help out numerous consultants. SAP could definitely brush up certain guides / help pages to give a clear view on what is what and how to use it and so on. Glad you did!

I faced some issues when trying to find out what each of the new function codes means when setting up roles for QGM and decided to share my conclusions in SCN. I hope I can help other people. I just went live with QGM in a customer with all the authorizations correctly set up and that was definitely an important point for the success of this project. Authorizations are often not very well treated during projects and support, and the correct set up makes all the difference.

I'm sure this blog post will prove useful to community members. I have seen discussion threads that are related to what your blog post explains so hopefully they find your blog post 🙂 and use it well

Awesome. Answers one of my big questions. Thanks for this one. And welcome:)) See you two soon again:))

I am facing the question from a customer regarding how to restrict the changes you are working in.  I imagine dozens of changes in a project and you want to restrict that people work only in their own changes, to avoid mistakes (releasing transport that belongs to someone's else transport).

I was digging into the objects and run ST01 to check the trace but I could not find anyway to restrict in which changes work each person.  As long as they are working in the same project, everybody that can modify a change can do it for any.  Do you have any alternative? Is there any badi that can help in working with that request?