Integration with CDATA based web services, which have an embedded request and response structure using SAP PI, has been a tough problem to crack.  In this blog, I would try to explain a generic way to integrate and map to such Web Services.

Let us start with understanding what CDATA actually means.

Typical problem is  PI, is to map a source  structure into a target XML structure, where CDATA information needs to be embedded into one node.   This can be an imported XSD or WSDL document.

In the screen shot above, the CDATA string needs to be imbedded onto the RequestXML element.

The transformed XML is expected as follows

The source structure on the other hand can be a hierarchical structure. 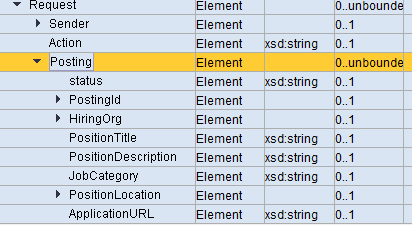 The First Step to achieve the above target would be to generate an intermediate structure from the hierarchical structure, with all relevant target fields being clubbed into one records set. 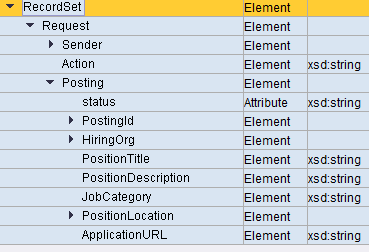 The next step and by-far the important step is to embed the above structure into the CDATA and finally into the request XML node.

There can be multiple ways to achieve this, one is to write a complicated UDF and build the XML (using string concatenation functions between the data components and tag identifiers like < , & gt).  This can become cumbersome and have hit on performance.

A simpler way is to write a JAVA map to do it.  I would explain a generic JAVA map next, which can be used in any such situations.

The First step is to create the root element for the target and define the expected target namespace.

This can simply be achieved by using the Famous Transformer Factory class.   The important method here is SetOutputProperty, with the attribute OutputKeys.OMIT_XML_DECLARATION.  This property is required to be set for converting XML to String.

The next step is to embed this string into the CDATA element of the target node. This can be achieved as follows

The createCDATASection ()  method takes care of the embedding, and the trick is done !

The above JAVA map can them be used for any such CDATA conversion requirements.

The point to be noted though is, that you would  need a sequential  ( graphical +  JAVA ) Operational mapping .

Former Member
March 9, 2012 at 3:05 pm
The more easier way would be create another graphical mapping and use the "Return as XML"  Intermediate structure root node to target structure node and use concat "" before and "" after.

Also a concat function cannot be used directly, as it a two level embedding. One to CDATA and next to the node.