When is a form not a form?

Or perhaps we should say ‘When is an app not an app?  When it’s a form.’

The current proliferation of apps; the race to build as many reselling apps as possible, is bringing new user interface options to SAP customers, and arguably the app is moving into the ground previously held by the e-form.

The introduction of increasingly more powerful smartphones and tablet devices has of course driven this widespread interest in apps.  Plus SAP’s acquisition of SyBase and the introduction of their app store are giving customers clear guidance that the new era of user interface will be via apps.

In many customers’ minds the edges between apps and forms have become blurred, and there is confusion about when to use an app and when to use an e-form.

So is this the start of the end for the e-form?  I say no: E-forms are cheaper to build, more flexible and easier to maintain.  In fact, tablets provide a new lease of life for the humble e-form.

‘Apps’ has become a generic term for any executable application on any device.  Even if we focus on SAP-relevant use cases, there are a lot of different technical models.

Wired apps rely on a direct connection with SAP. They may reside on the client device or they can be served up on demand (for example in cloud-based solutions).

Un-wired apps can work without a permanent connection to SAP, so they need a local database on the client machine.  This is where SAP’s Sybase Unwired Platform (SUP) provides the infrastructure to handle the synchronising communications to multiple different devices.

Since HTML5 instead of Flash is the universal standard for mobile devices, then tablet-based apps need to be created in HTML5 or in the standard that is supported by the device’s operating system.

For PCs, Flash is used widely for apps that are served on request. For client-based apps then Adobe AIR is the equivalent technology. 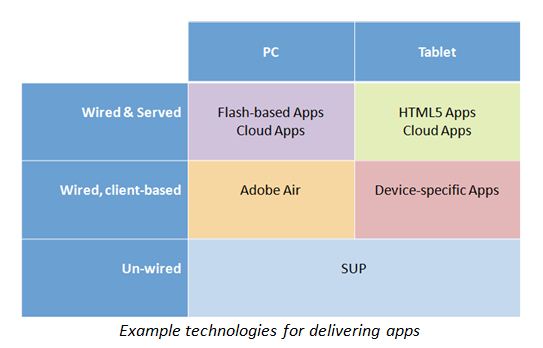 E-forms are ‘single shot’ interfaces used for data collection.  They are typically much less complex than apps, so cheaper to develop and maintain.  They have traditionally been used on PCs (PDF-based forms) and websites (HTML-based forms), but not on smartphones as the screen size has prohibited great form interfaces.  However, with tablets, the e-form can have an important role.

Wired forms are ‘On-line forms’ which are typically rendered at the point of request, served up to the requester, and so can be pre-populated based on real-time data and based on who has requested the form.

Un-wired forms are ‘Off-line forms’ which are typically sent as e-mail attachments and filled in without any connection to an SAP system, then submitted back by e-mail.  These work well for scenarios where the form user is external.

Tablets support HTML forms rather than PDF forms, and so this lends itself much more to ‘on-line’ rather than ‘off-line’ scenarios.

It is the use of e-forms on tablets in particular that needs to be differentiated from mobile apps, and to this end I propose new terminology:

These forms can be used for all kinds of business processes; note that the user will always authenticate to SAP in order to launch the form. 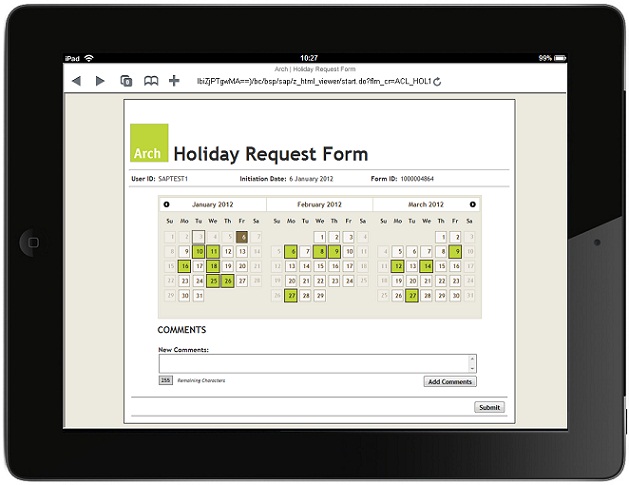 Mobile forms are HTML e-forms that are launched from an app based on the mobile device.  These forms will work in an entirely disconnected state, which means that:

i) They will be larger, as they will not rely on server-side resources like logos, style sheets and scripts, and

ii) They will rely on a local database, and so require SUP in order to synchronise the data to and from the SAP system.

The use cases for mobile forms are more limited to form-heavy jobs, such as police, social care and perhaps field service.

How to select the correct approach

Your business requirement may require e-forms, or apps or a mixture of both.  Remember that one size does not fit all.

Here are some questions to help you decide whether an e-forms solution or an app solution is the best way for you:

Does your requirement need to:-

More likely to require an app rather than an e-form

More likely to require an app rather than an e-form

More likely to be a PDF form