Duncan Dortants,  Active Global Support, SAP, provided this ASUG webcast on Crystal Reports with SAP Tracing, intended to provide tips for enabling trace features on an SAP back end, allowing you to analyze these traces.  He reviewed the various drivers available, how to enable traces for drivers, tips and tricks on how to analyze traces, and how use this against meaningful searches

What are the drivers 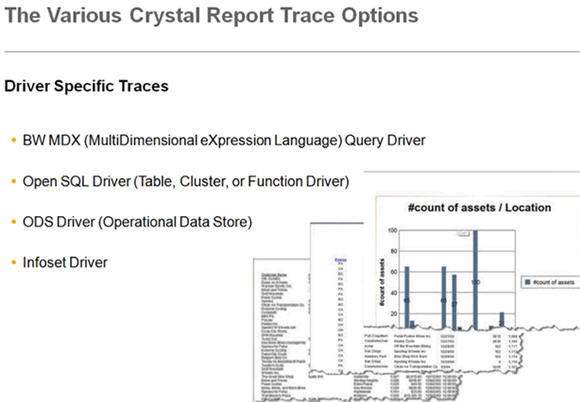 How turn on traces? Figure 2 shows the Windows 64 bit registry location.  It can be used for other operation system versions as well.

Figure 2 above shows that 2 keys are set:

How to Analyze Traces

Example is OpenSQL driver trace; this applies to the others.  Figure 3 above shows Timestamp and ThreadID.  Two values can be important if want to filter on a specific ThreadID and see how long specific thread can be run.  You can have multiple threads going.

Open SQL will go through a series of functions that all start with a /CRYSTAL – part of the Crystal namespace. 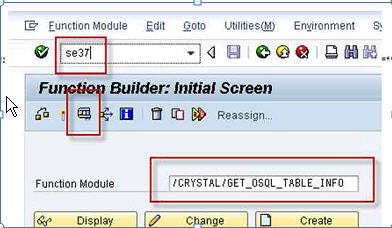 Figure 5 shows the /CRYSTAL/GET_OSQL_TABLE_INFO function against SFLIGHT table on BW server (same steps can be shown on an ECC backend). 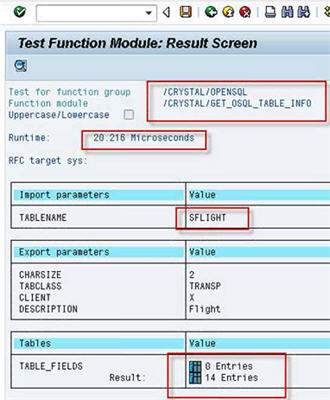 On the backend (BW or ECC), go to transaction SE37, which is the function builder on SAP system  – to call these same functions

In this example in Figure 6, the table parameter is SFLIGHT.  When you execute, you get the run time which Duncan said is valuable.  Figure 6 shows the function returns 14 fields

If run traces, you can use that to compare against SAP back end to see if data is valid.  Figure 6 shows that it took only 20 microseconds to run this function module.

The bottom line shows a cell limitation of one million which is a 7.01 BW limitation – later versions do not have that limitation, according to Duncan.

Figure 9 shows that you can manually execute by going to MDXTEST, enter catalog and cube, copy and paste select statement and run it and it will give you sample data on what is returned. 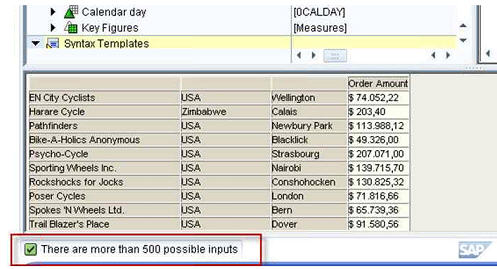 Sample data is returned and it is limited to what it will show.  If it ran successfully – means XI, Crystal and BW select is correct.