In the first part of this weblog series I introduced the ABAP package concept (ABAP Package Concept Part 1 – The Basics ) and package interfaces (ABAP Package Concept Part 2 – Package Interfaces of Development Packages). Now I introduce packages hierarchies and discuss how they can be used to structure applications: what packages build an application and how to define functional cohesion in an application. Please be aware that I describe package concept in Releases 6.10 up to 7.02 and things will change slightly in 7.30 but this is topic for another blog.

In the last instalment of this series I discussed package interface which reflects the concept of coupling: what are the dependencies between software packages within in application and between applications? We will discuss another way the package concept supports this concept and the related concept of cohesion which means how “focused” a software module like a package is.

Without structure packages software architects tried to tackle above mentioned challenges with naming conventions but those conventions have drawbacks:

I can give you lots of more examples but the consequence is clear: at a certain time you will have to violate naming conventions. And even if you manage to avoid violations there is the danger that those naming conventions will be forgotten in the long run or they are getting too complex.

“From Software Components to Structure Packages”

This most import thing you have to know is that the package hierarchy defines visibility and controls access of development objects. The reason is simple: In a package hierarchy each parent package can restrict the use access: if it has package check “as server” only you can access development elements within its hierarchy using package interface. In fact package interface from deeper packages can be propagated to parent packages. If we don’t propagate certain interfaces we declare that a certain function is not accessible from outside the hierarchy.

As a consequence the packages concept makes it easy to access services from sibling packages but you can restrict usages at the level of the common parent packages. So a subtree within a package hierarchy defines a set of packages that can use each other’s functions. This corresponds to the principle of cohesion:  in software engineering we usually try to group development objects that belong together. This may sound to abstract but I will discuss an example below. 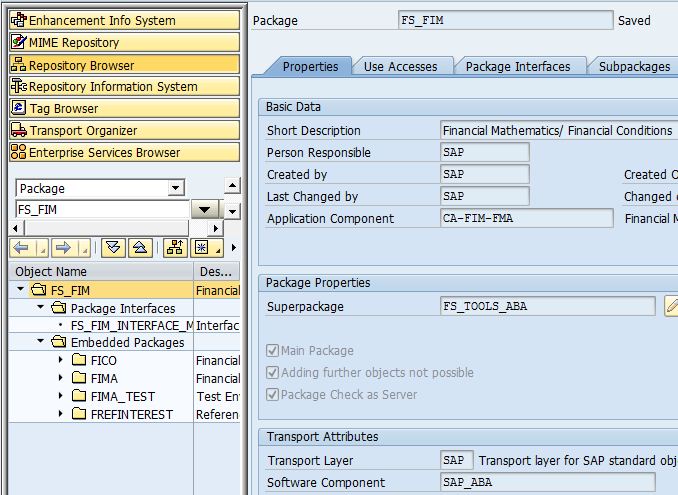 This has many advantages: there is an explicit main package for financial toolset. Every contained package can propagate its interface to the main package so you can reduce the number of use accesses at the side of the client because interfaces are bundled: 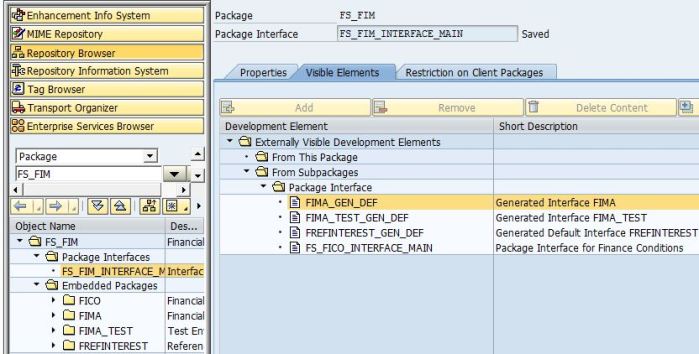 As I showed above the services from financial mathematics are exposes in interface FS_FIM_INTERFACE_MAIN and you have to declare a use access to this interface in any case: package check mode R3ENTERPRISE as well as RESTRICTED. Here is an example that shows how the Accounting Engine declares a use access:

I explained the connection between package checks and package hierarchy. This may sound very complicated and so I will come back to this example in the next installment of this series where I show how to perform package checks.

Cohesion as Quality Criteria of an ABAP Application

So what is package concept all about? It’s all about cohesion: are the parts of a package grouped arbitrarily or is there an underlying design principle? Are the packages of an ABAP application grouped arbitrarily or is there a structure? With an underlying design principle which is understood by developers maintenance it’s easier because a certain aspect or function is located in a defined place you can easily identify parts of the software that implements a certain process.

We will discuss grouping of modules in two scales:

There can be many different grouping criteria – let me first give some examples for development objects:

Using package hierarchies you can group packages according special criteria – let me mention a few:

Those aspects are aspects of cohesion which is explained very well in Wikipedia: cohesion means how “focused” a piece of software is: 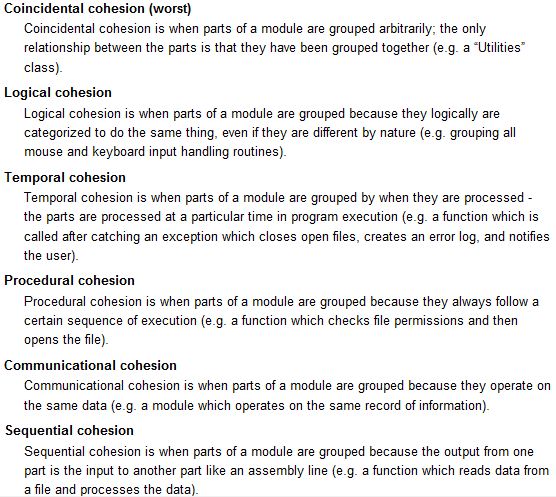 A software architect has a clear vision of the application that has to be created and knows about cohesion aspect within the application, he know interfaces to SAP standard and to SAP applications that are extended. Let’s look at an example in SAP Standard (a SOA tool called Error & Conflict Handler – ECH) where in most cases the structure has been chosen with regards to functional aspects like archiving:

I made the experience that many SAP customers don’t care about cohesion and the reason is very simple: the package concept is new and many SAP customers only know the concept of naming convention. As a consequence they create packages like ZFI for FI development, ZCO for CO development and so on. Software engineering finds the correct words for it: “coincidental cohesion” which Wikipedia calls the worst cohesion type because it has the semantics like: “develop here something with FI”. Of course this is the worst thing you can do: Is the development an extension of an existing FI process or a new process? Or is it used for migration? What about cross-cutting concerns used both for FI and CO – is it automatically BC? Sometimes those design criteria for packages are mixed with organizational aspects: FI guys develop in ZFI and are responsible for that package – but what happens if Basis developers develop parts of an FI process – is it part of package ZFI or ZBC? What happens if the organizational structure changes?

The answer is simple: If the development consists only of one or two reports resp. BAdIs, packages like ZFI and ZCO are useful. If the development gets more and more complex then packages with coincidental cohesion which have no clear focus tend to grow exuberantly. The consequence is that such maintenance will be difficult and expensive.

In this blog I discussed how packages can be structured and nested hierarchically. I explained how this affects to package checks: In a package hierarchy you can control access to contained packages: the packages may be coupled by using each other’s interfaces but not every interface has to be propagated by the surrounding packages.

Using packages you can group development objects as well as other packages. This can be done in different ways and I used the concept of cohesion as quality criteria. Usually cohesion used as property of smaller software modules but I think we can it apply general software pieces that are parts of applications.

Naming conventions are useful and I recommend using defined (and if possible unique) prefix for all elements in a package but should be aware that those naming conventions can’t replace the package concept because of the following reasons:

So my advice is the following: