The emerging competition between SuccessFactors Jam and SAP StreamWork  is it necessary?

SAP’s Prashanth Padmanabhan recently responded to a conversation on Twitter that emerged based on his blogconcerning the use of SuccessFactors’ Jam to communicate with colleagues at newly acquired SuccessFactors. In the initial blog, Prashanth gave this description of his motivations for using Jam:

A few weeks back teams from SAP and SuccessFactors started working together and exchanging information. The teams used SuccessFactors JAM to bring people together, share content and get things done. A lot of work needs to be done when two large companies come together. Time was of the essence and there is no scope for delays.

The resulting conversation on Twitter compared Jam to SAP’s own StreamWork and explored Prashanth’s decision to use Jam instead of the other tools.   I was interested in the conversation for various reasons:

I took the ensuing debate as an impetus to look more closely at Jam and StreamWork.

A comparison of Jam and StreamWork

At first glance, there appears to be an overlap between the two tools. There are various similarities:

When you start examining the two offerings in more detail, however, it becomes apparent that the primary use cases that each tool covers and their respective positioning in the market are different.

In terms of basic functionality, Jam is more similar to Yammer.  As evident in the use cases on which Jam is focused, SuccessFactors positions Jam in a manner that reflects SuccessFactors’ HR heritage.

SuccessFactors Jam provides a community for your new hires where they can engage with each other, work together on onboarding activities, and receive support from experts from human resources, payroll, facilities, IT, etc. [SOURCE]

Jam will make your performance appraisal, goal setting and compensation planning more efficient for your company’s managers and human resources. By giving your managers the detailed information they need when they are actually working on forms, you’ll have better compliance with company guidelines and receive better data on your talent improving downstream processes like succession and development planning. [SOURCE]

By adding a Jam community around each class, both virtual and traditional classrooms, you’ll improve the return on your learning investment. With Jam, not only is document distribution a snap (even from SharePoint), but learners do pre-work and discuss the concepts before, during and after the class, greatly improving retention. [SOURCE]

There are often complaints regarding the actual relevance / ROI of new social collaboration tools in the enterprise. By embedding Jam in existing HR processes, SuccessFactors is more able to argue that JAM directly enhances such activities rather than providing vague benefits for its customers. Although Cubetree once supported various other non-HR-related enterprise integrations (including SalesForce!), these are largely ignored today; SharePoint is now the most important integration target.

Just a side note but the fact that JAM also offers wikis, blogs, discussions, polls, photos, etc, actually means that there might be an overlap with the functionality provided by the Collaboration in SAP NetWeaver Portal.

SAP’s positioning of StreamWork is broader – there are various integrations possible (CRM, BI, ERP, etc). I assume that HR-related integrations are possible but I didn’t find any details. This more general positioning reflects the characteristics of SAP itself – in that it offers a much greater variety of products than SuccessFactors.

While the focus of JAM is largely on activity streams albeit in a HR context, StreamWork has a different focus in that it focuses more on collaborative decision-making.

SAP StreamWork provides a cohesive online environment that enables teams to perform collective problem solving.  Bring order to chaos when you invite people from inside or outside the company, get the team to commit to a  cause, and keep everyone on the same  page with notifications and action items.  Bring structure to the process by selecting proven, interactive business tools from the built-in catalog to plan agendas, assign responsibilities, rank lists of items, brainstorm options, poll the team, or strategize. [SOURCE]

StreamWork also has activity streams – underused in my opinion- but the activities with their tool catalog (Cost/Benefit Analysis, SWOT Analysis, Consensus, etc) are more important.

Although Prashanth and his team didn’t use StreamWork, it provides other functionality which would help the collaborative process between the two companies.  For example, the social “explorer” would be useful for such internal teams which lack detailed information about each other.

This functionality – especially the ability to actively explore the network to discover new experts, etc – would be quite useful if exploited by the social network inherent in Jam.

Thus, despite general similarities, each tool actually has a different focus.

I don’t know the exact activities that Prashanth and his team performed with SuccessFactors colleagues in Jam. We just have the one blog with limited details.  I assume some decisions were also discussed during such interactions. I’d be curious to know why the teams didn’t use StreamWork to make the related decisions.  Prashanth answered my general question regarding the choice not to use StreamWork so:

Perhaps we found JAM to be more suitable for this type of collaboration. May be it was a gesture of openness towards our new colleagues from SuccessFactors. [SOURCE]

There are a variety of scenarios – beyond those in which that Prashanth and his team were involved – where the two tools could be integrated with one another.  For example, users in JAM could be discussing a performance review and need additional tools (SWAT Analysis, etc).  Until a deeper integration exists, the users in the conversation could manually create a StreamWork activity and add the link to conversations. When a deeper integration via API exists, then a special dialog to create an activity might be provided for JAM users. 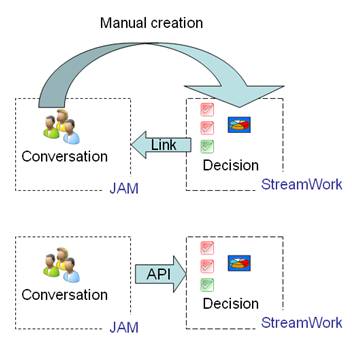 The acquisition of SuccessFactors by SAP represents an opportunity for each company. The synergetic potential is there but the main question is whether both companies can avoid confusing customers as choices are made concerning future product strategy.  The uncertainty in the ecosystem concerning StreamWork and Jam is one indication of this greater problem.   Regarding the main HCM products, an initial decisionregarding the general direction has been made – whether this decision was correct or not is an assessment that will be made by others.  Although Jam is mentioned in this press release, its potential relationship to other existing SAP products is still unclear.

Each company has the opportunity to show their collaboration tool to a new customer base.  This is only effective when the respective positioning focuses on the unique use cases at which each tool performs most effectively.  Encroaching on the territory of the other collaboration tool – whatever the temptation – should be avoided.   This strategy only works when the particular strengths of each a tool –those specific use cases which it can solve optimally – are identified; the assertion that either tool can solve all or most collaboration-related business requirements is counterproductive.

As this blog has shown, the threat of a competition between StreamWork and Jam is largely based on superficial comparisons rather than a deeper examination of their respective positioning / use cases.  Indeed, integration possibilities show that the tools might even complementary.  SAP and SuccessFactors should offer details about how the two tools will evolve and their respective positioning. If this clarity isn’t provided soon, then the marketplace will make assumptions – regardless of whether correct or not – that are detrimental to the future success of both collaboration tools.