POV – FSCM a Pinch-Point for PI

The business logic for the credit management function exists with the SAP FINBASIS core component.  Interestingly the integration medium used for the above is SAP PI.  SAP PI provides out of the box integration content around FSCM.

The core scenarios involved in FSCM are Creditworthiness Query and Credit Exposure updates. 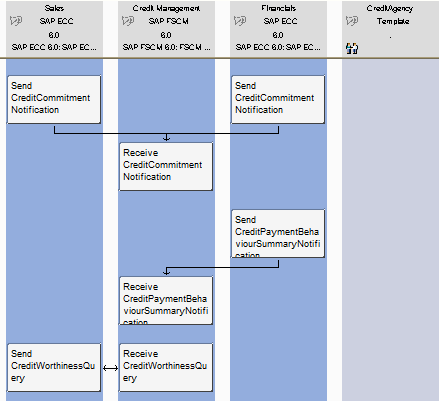 The FSCM Creditworthiness calls are synchronous in nature and are triggered whenever a configured document type like Sales Order/Delivery/Invoice is changed or created.

Though the FSCM business function lays on the same box as ECC, the driver for using PI, in my opinion was to leverage SAP FSCM as a separate SAP product for clients not implementing ECC.

This PI integration can sometimes become a major pinch-point of PI and operations in general.  The following are the distinct disadvantages which I observed:

Overall a PI based solution for a customer, implementing SAP adds considerable overhead.

Looking into the future – Per SAP documentation and product management briefings, there is a potential non PI solution available for SAP ECC Ehp5.  It is a web service – WSRM based solution.  The web service provider and the consumer are on the same physical system. In my opinion the following could be dis-advantages of the solution:

A far simpler solution in this use-case would be to eliminate PI as well as Web Services and do a direct ECC query.  This can easily be achieved as the Function Modules and bAdis exists in ECC.

I did this for one of my client, who had a requirement of over .5 million orders a day.   This can be achieved, by simply by-passing the call to the outbound proxies and calling the inbound proxies directly via an implicit enhancement. This can be done on the method  CHECK_CREDIT of class IF_UKM_CREDIT_QUERY_R3.

The following is the advantage to this approach:

I feel such a solution is far more sustainable and performant in such situations.

I am working on putting a How to Document for the same and would post it soon somewhere on SDN.