This past week I attended the Cloud Connect 2012 show in Santa Clara, California. In addition to attending the talks, I was also staffing our Sybase booth where we were exhibiting our new cloud database for ISVs, SQL Anywhere OnDemand. 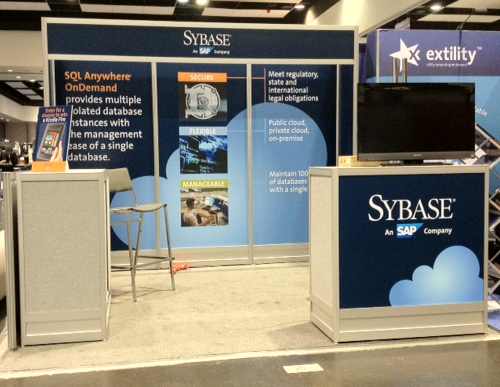 Although I was not able to attend as many sessions as I would have liked due to traffic at our booth (a high quality problem 🙂 ), there were a few interesting themes that I noticed emerged during the conference.

I attended this same conference last year, and I recall that last year had a strong focus on the public cloud, and public cloud providers. This year, I felt there was a shift to a strong focus on private clouds. For example, one of the opening keynote was delivered by Allan Leinward from Zynga. He explained how Zynga has made a shift from being 80% public – 20% private, to 20% public – 80% private over the past year. (more on that story here).

I also found that the talks had a greater focus on the private cloud. For example, scanning the titles of all of the sessions reveals six titles that contain “Private”, but only one that contains “Public”. Going hand-in-hand with this, there also seemed to be greater number of security and governance talks compared to last year.

Lastly, it seemed there were a greater number of private (or hybrid) cloud providers exhibiting in expo hall. In fact, one notable exception in the public cloud space was Amazon Web Services. This was especially noteworthy because they were a major sponsor of the show last year.

My take-away from this is that as the cloud is becoming more “real” for businesses, the concerns around security are forcing them to think more carefully about the public cloud/private cloud question.

A few of the keynote speakers spoke about the types of enterprise applications that are moving to the cloud. They noted that CIOs are often that last to know what cloud application and platforms are being used inside their own enterprises. In fact, they suggested that often the best way to find out what cloud applications and platforms are being used, is to examine middle-manager’s expense reports. Why?

Because most of these clouds offerings require no capital expenditure, and only a relatively modest operating expenditure, they are well within the expensing limits of a middle-manager. Adoption of cloud technologies in an organization is bottom up. By offering a cap-ex free, utility model for your product or service, you enable middle-managers to circumvent their own IT staff (or at least, keep them ignorant).

My take-away from this is that any product or service that will be offered in the cloud should have a cap-ex free, utility option. This will allow front-line workers to start using it in a production environment, while only requiring approval from a manager with a company credit card. The hope is that once IT finds out about it, it will be so well entrenched that IT will need to find a way to support it.

It would seem that some of the high-profile cloud outages and large-scale data breaches in the past year have sobered people to some of the realities of the clouds. I think this is a natural change in focus as the cloud starts to mature. As more applications are moving to the cloud, there are more people experience the new challenges that it brings.

The part I found most interesting is listening to the different strategies to deal with it. The most common solution was to, “Just accept that it will happen.”  By accepting that failures will happen, and that they do not just happen in exceptional circumstances, you will be better prepared to deal with it.

Putting this theory into practise, I heard a few mentions of companies who have created a equivalent of Netflix’s Chaos Monkey. A Chaos Monkey does exactly what it sounds like: causes chaos. It is a process that runs against a production site and randomly kills processes, machines, network connections, etc. The idea is that if failure is a daily occurrence, there is no reason to fear it. Sounds scary, but it seems to work.

All in all, it was a good show. It will be interesting to see what the next year brings for the cloud, and what this show will look like next year.