For those of you unfamiliar with SAP Business ByDesign and the SAP family of “Line of Business” applications, I refer you to my recent article for SAP Insider: “End-to-End Business Processes in the Cloud – A Tour of Today’s Business ByDesign” for some background that explains the solution, and how partner extensibility through the SAP Store works.

SnapEngage is a customer chat application built upon the Google App Engine that integrates with customer-facing web fronts – like your website or company Facebook page –  and your enterprise systems such as SAP Business ByDesign. The resulting solution enables sales or customer service agents to  engage with  customers and prospects through  live chat sessions directly from Facebook or your company’s websites, pulling context-rich information from ByDesign during the session for your  agents , and then feeding the chat session record back into ByDesign at the close of the session to capture leads or information for support requests. 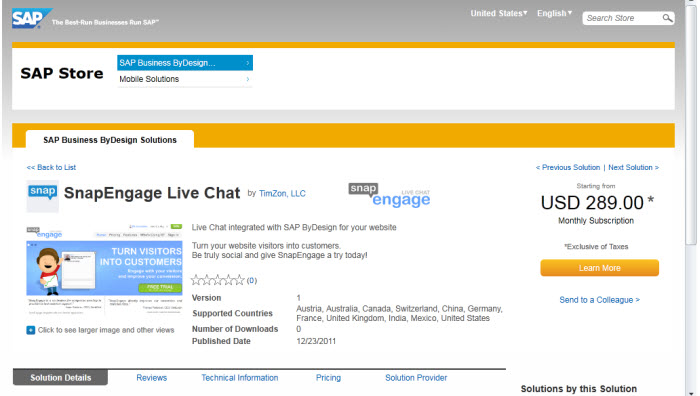 For SAP Customers, the integration of SnapEngage with SAP Business ByDesign demonstrates the wide potential of capabilities we expect to become available as independent cloud app developers choose to integrate their offerings with SAP Business ByDesign and SAP’s Line of Business OnDemand applications. This also shows the power of ByDesign’s open platform, where partners can marry multiple cloud services into value-added solutions to meet specific business needs, such social engagement of customers.

For independent cloud developers interested in partnering with SAP, the SnapEngage integration illustrates just one way they can provide their functionality to customers of SAP’s cloud offerings via the SAP Store. In addition, cloud developers may choose to create integrated apps that run in the SAP Cloud by using the SAP Business ByDesign Studio, or leverage SAP’s forthcoming Java-based Platform as a Service (PaaS) known as Project River.

To learn more, view the demo of SnapEngage integrated with SAP Business ByDesign on YouTube below, and join the SAP Inside Track Palo Alto virtual event on Thursday, February 16, to see a joint presentation with Jerome Breche, CEO of SnapEngage, and Christian Happel, Director of Product Management at SAP – showing live at 1PM Pacific Time. 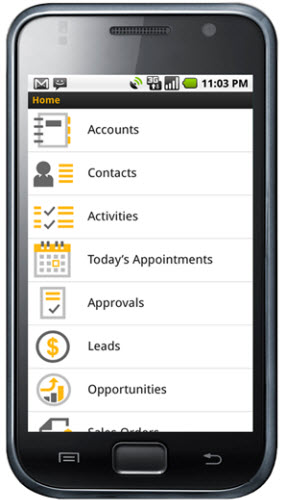 Following SAP’s “mobile first” design principle, mobile access is natively built into SAP Business ByDesign.  As a result, mobile security and access controls are part of the overall access control within the solution.  If a user has access to certain functionality within the Web version of SAP Business ByDesign, they will normally be granted similar access on the mobile devices.  If a user’s access is revoked within the system, any mobile device will have access revoked as well.

When customers add tightly integrated partner applications from the SAP Store to their solution, any mobile screens provided by the partner app are immediately available to mobile devices via the ByDesign player application, subject to user access rights. This capability is for partner apps built with the SAP Business ByDesign studio and hosted within the SAP Cloud, so as to distinguish from apps that run in other cloud services, such as SnapEngage described above, which has its own direct support for   Android.

SAP’s Business ByDesign broad range of support for the most popular mobile devices allows customers to support “bring your own device” policies where their employees can choose their preferred mobile devices on their personal accounts, rather than only supporting standardized company-issued devices.

SAP is also developing an integration between Google Docs and SAP Business ByDesign. The integration will allow users to create and append Google docs to system documents within business processes such as sales opportunities, quotes, orders, or customer service requests. Documents are saved as links within the customer’s SAP Business ByDesign system. The actual Google Docs are saved as part of Google’s cloud service. This combination allows customers to leverage the highly collaborative capabilities of Google docs, such as simultaneous document editing, and then have these documents saved as attachments to transactions within SAP Business ByDesign. These capabilities are especially useful for customer actions such as collaborating on a potential statement of work in a sales scenario or developing a project plan for a professional services company.

Below is a video demo of a prototype of Google Docs integration: