Ian McAlpine, SAP, provided this ASUG webcast this past week.  Attendance was high and at the end of the webcast we survey our members for feedback – most rated this webcast as excellent.

The usual disclaimer applies – things are subject to change. 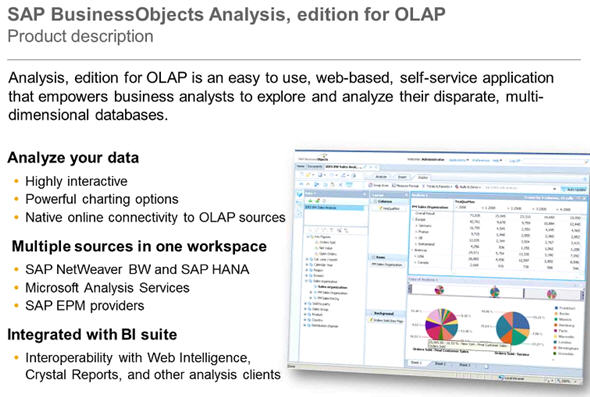 Figure 1 shows what Analysis OLAP is.  It is web based, no additional plug-ins; it is a DHTML client and accesses multiple data sources simultaneously

Soon it will have support for SAP HANA and SAP EPM providers. 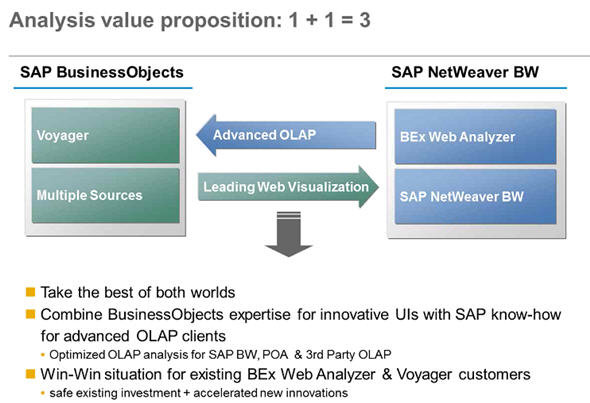 Strengths of Voyager were weaknesses of BEx Web and the reverse of the tool.

BEx Web had more features but it was hard to use.

The team was given the task of “Best of Both worlds”. 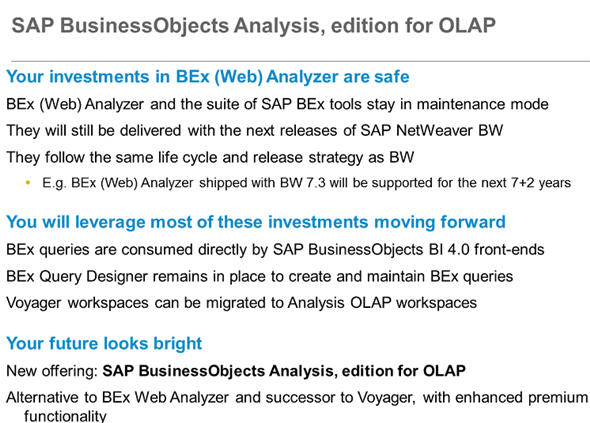 BEx is not going away, says Ian. They will go into a maintenance cycle with no new features but will be supported until at least 2020.

Voyager workspaces can get converted to Analysis Workspaces.  With BI 4 there is no Voyager as Analysis OLAP replaces it. 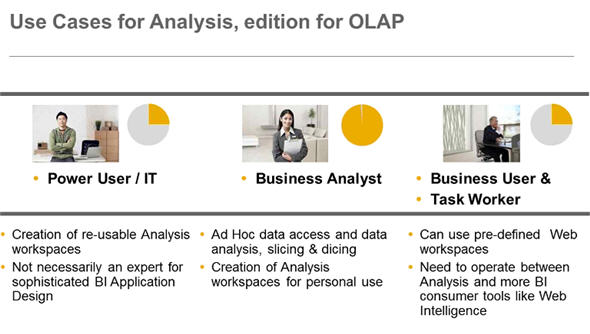 Figure 4 shows who the tool was designed for the Business Analyst.  This is not necessarily a technical person but someone who knows their data.  The pie chart shows it covers the use case for the business analyst. 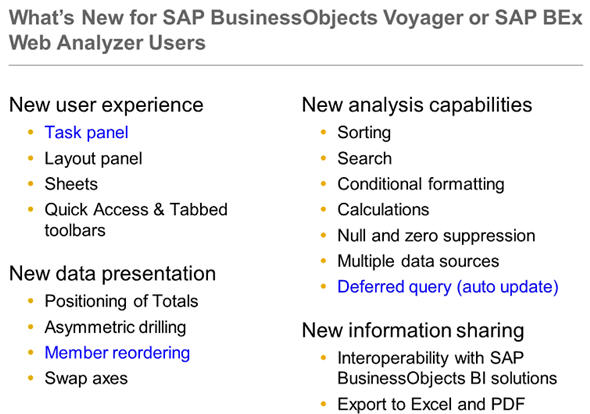 For BEx Web the new user experience is different.  The task panel is on the left with very little pop-ups so the data is not hidden.

Deferred query feature is used if you know the sequence of steps you can defer the query as it will take those steps and then the query executes at once.  Now if you drill, wait a few seconds, the response comes back.

Export to Excel and PDF has been improved.

Analysis Views is created by both Analysis Office and OLAP – it defines a data source that can be consumed by Web Intelligence and Crystal Reports. Figure 6 shows Scope of Analysis is an overview/slide control and lets you focus in on information that is interesting to you. 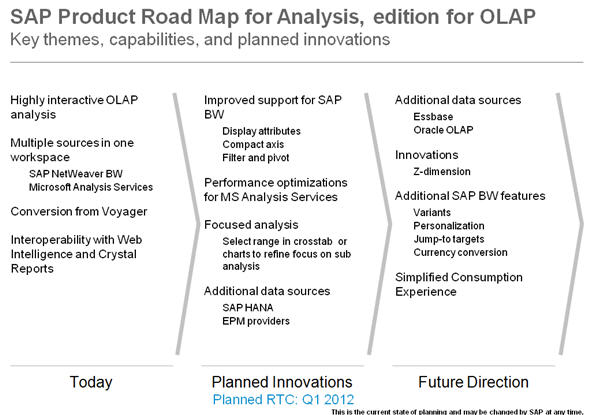 For Planned Innovations (feature pack 3), the planned ramp-up start date is end of March.  Feature Pack 3 contains new features in the planned innovations column.  Features include improved support for BW includes support for display attributes and use them in Filter By Member task panel.  Compact axis allows you to create virtual hierarchies.

Feature pack 3 will include support for SAP HANA and version 10 of the EPM providers.

Future directions will include Essbase.  Z-dimension is a teaser for this time next year and was covered in Usability testing at the ASUG BusinessObjects User Conference last October.

For future BW support variants and report to report interface.

Another new area is the Simplified Consumption Experience will be a different mode to customize the experience.

As shown in Figure 8, Analysis OLAP has a familiar appearance with the other BI4 tools such as Crystal and Web Intelligence.

All tools have the common toolbar in the top left. 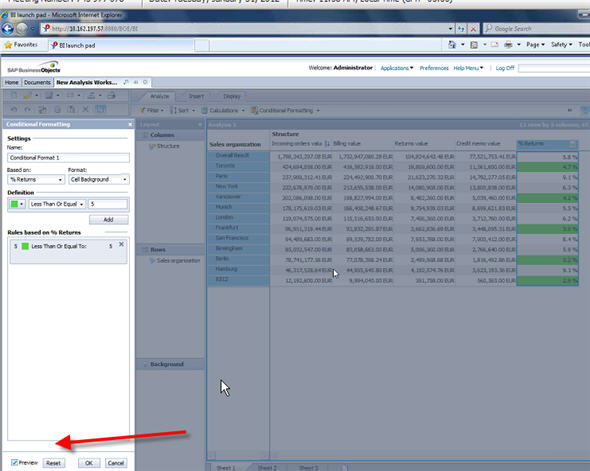 Figure 9 shows that the Task Panel is used to create some conditional formatting.  A nice feature is while you are using the Task Panel, you can still see the data on the right hand side.  Additionally the Preview feature (lower left corner of Figure 9) lets you see what is happening or if the rule is not acting as you expect “live, real-time” as you build the rule.

The demo was against a BW cube of 25 million records. 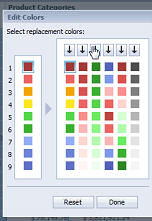 Ian reviewed the color palette in figure 10.  The 2nd column is the “shades of red” palette and the 3rd palette is the shades of green.  The fourth column is the red/blue palette, which can be used for “hot” and “cold” analysis and can be used in the conditional formatting analysis. 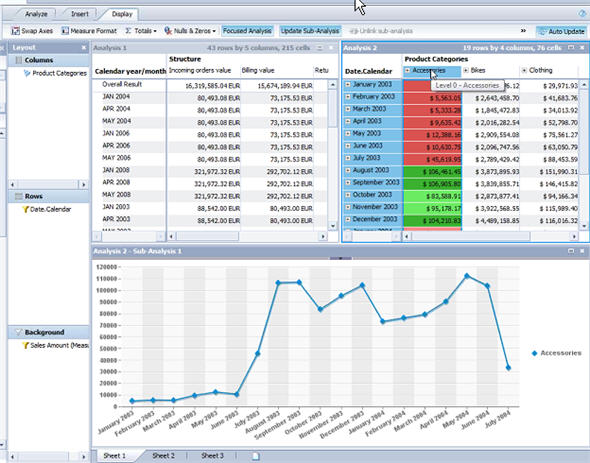 Figure 11 shows Feature Pack 3 feature Focused Analysis.  In the upper right, the accessories column is selected and in the bottom part that is what is shown on the chart.  It allows you to focus in on a range of cells while still seeing the context of the data.

Some key takeaways, per Ian, are that Analysis OLAP is the successor to Voyager and it is the premium alternative to BEx Web Analyzer.  Analysis OLAP uses the existing BEx queries and Voyager spaces can be converted.

Ian encourages you to visit YouTube and search Analysis OLAP 4.0 to see more.

Q: Will BPS Planning templates be converted successfully with SAP BO 4.0 as well?

A: BPS Planning is in maintenance and no conversion in planned. Analysis edition for MS Office does support BW-IP (Integrated Planning)

Q: Is there no ETA, for that future release as of yet?

A: Currently there is no ETA at this time

Q: Interoperability with SAP BI solutions – Can analysis views be created by Analysis OLAP and consumed by Analysis Office and also by Webi/CR?
A: Analysis, edition for OLAP and Office can create and consume Analysis Views,  Webi and CR can only consume them at this time.

Q: Is there any plan in the future to consolidate Analysis into WebI?
A: No there is not, currently each tool is focused at a different persona

Q: Is the Analysis View similar to BEx Query View?
A: Yes it is very similar, the difference is that it is for all data sources and is stored in BI Platform

Q: We have seen in our environment where ESSBASE is blocking BEx COM objects. SAP has stated that it is a known issue. Is this addressed with BO 4.0?

A: Not aware of this issue and therefore cannot comment if this is fixed with BI 4.0

Q: Is this product currently available for download in conjunction with SAP BW 7.01 SP7? We are currently running SAP GUI 7.20 SP5 v1776
A: Analysis, edition for OLAP is part of the BI package and separate from the SAP BW/SAP GUI.  We do support 7.01 SP5 or greater

Q: Analysis for OLAP comes with BI 4.0 Package, and Analysis for MS Office requires separate license, is that correct?

A: Analysis, edition for OLAP does not currently support broadcasting, you would have to go via our existing exporting or use the Analysis Views feature to open the data in Webi or CR. Analysis OLAP  can be directly integrated into the SAP Netweaver Portal.

Q: What capabilities are provided for mobile?
A: Mobile support is planned for a future release

Q: Can we pass parameters from WEBI or Dashboard via OpenDocument to Analysis for OLAP?

A: Today Analysis OLAP supports the workspace name as a parameter via OpenDocument. For example in the Dashboard you can tell A-OLAP to open with a specific workspace. If that workspace is saved with the task panels and layout panels hidden then they will remain hidden when the workspace is opened.

Q: How does this integrate with SAP EPM v10
A: EPM v10 can be used as a data source in Analysis, edition for OLAP

Q: Did you mention 3.1 will be ‘safe’ for another 7 years?
A: XI3.1 follows SAPs standard maintenance plan and will be supported for the next 7 years. There is no feature enhancement.

Q: What is the migration path from for BEx queries?
A: There is no migration required, Analysis, edition for OLAP can open and support existing BEx queries

Q: Is “Unit of Measure” conversion supported in the new tool?
A: Unit Conversion is honored in the query, but cannot at this time be changed in Analysis, edition for OLAP

Q: Any other integration? Such as with the EPM interface itself?

A: Yes, A-OLAP is integrated with BPC.

Q: We’re currently using Voyager with 3.1, does that apply to this timeframe?
A: Yes, XI3.1 follows the same SAP maintenance plan of 7+2 years.

Q: Can this be used on any of the tablets out in the market
A: It works… somewhat… but is not designed for tablets. There is an offering (Analysis, edition for Application Design) that will beta at the end of Q2 this year that will address this.

Q: Would all the features of BEx query (such as BEx variables,structures, unit of conversion etc) can still be used as we can directly access BEx queries from new tool. Can you confirm?
A: Fundamentally yes. The unit of conversion cannot be changed directly in AOLAP yet… that’s planned for a future release

Thanks to Ian McAlpine (@ianmcalpine) and Gavin Olle for this webcast and taking the time to answer and update the question & answers.

We hope to see more about this at ASUG Annual Conference this May in Orlando.