Social Media as a Place of Conglomeration

A friend of my husband’s from grad school was on a business trip to the San Francisco Bay Area, visiting us from Seattle. The entire bunch of grad school friends (with wives in tow) got together and met at this really popular ice-cream place in Sunnyvale. As I was waiting my turn in queue, I heard a voice shout my name. I turned, and saw a girl from my undergraduate school- who I had not seen in 12 years- standing there, all excited to see me. It was a nice reunion of sorts. Later, talking about how the Bay Area is a place where a lot of people in technology percolate to, my husband’s friend said, “Yes, people meet either on Facebook or in the Bay Area”.

This offhand remark set me thinking. In this guy’s mind, both Facebook and the Bay Area were places to meet in. His careless comparison and correlation of these two distinctly dissimilar sites (one was a physical place and the other virtual) and everybody’s unquestioning acceptance of the same implied that most people did perceive Facebook as a place to meet. A place that facilitated conglomeration, encounter and interaction.

As an architect, I have been fascinated by what creates a place out of any space. Most places become important to human beings not only because of their physical attributes, but owing to meanings and values associated with them. The term ‘place’, as opposed to space, implies a strong emotional tie, temporary or more long-lasting, between a person and a particular physical location (Sime, 1995).  While place-making theories abound in architectural theory, one that particularly resonates with me is David Canter’s theory of place-making. Place, as postulated by the environmental psychologist David Canter (1977) “is the result of relationships between actions, conceptions, and physical attributes” (See Fig. 1). 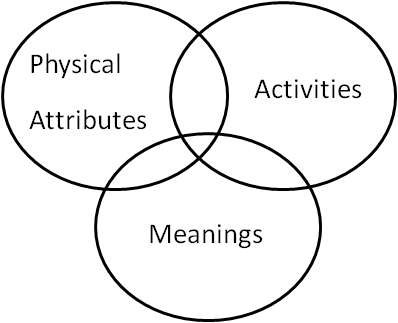 I wanted to explore this concept further to see if it could be applied to virtual ‘sites’ of socialization. Social Media is now almost ubiquitous in our lives, with Facebook, Twitter and blogs fast becoming our acceptable means of communication and contact. As of writing this, Facebook stats showed me over 800 million active users. Twitter boasts about 7,000 tweets per second. Blogger, the most popular blogging site, is a medium of both knowledge dissemination and self-expression. So much so that I have made really close personal friends via Blogger, by connecting online first and later meeting in the real world.

A white paper I recently read, on the ‘Evolution of Communication’ talks about how our computer is a gateway into social spaces for work and play. Facebook and LinkedIn are for personal and professional connections respectively, and virtual worlds like Second Life and World of Warcraft – all of these are online meeting spaces where users interact and express themselves. If we apply Canter’s second parameter here, these spaces afford certain activities that link the person and the space/place together.

So, applying Canter’s three criteria, we do not find any “physical attributes” to virtual sites, but we see a large number of “activities” and “meanings” associated with these social media locations.  Our interactions give us the ability to stay in touch with people across time and space, which is important to us. However, only two of Canter’s criteria are fulfilled. So does this qualify social media as place?

Determined to find out whether the internet/social media was a place or not, I came across Ray Oldenburg’s work on place. He coined the term ‘third place’ or ‘great good places’ to describe public spaces used for informal social interaction outside of the home and workplace, like coffee shops, malls, pubs, cafés, libraries, etc. These third places were central to community vitality and fostering a ‘sense of place’. Third places “host the regular, voluntary, informal, and happily anticipated gatherings of individuals beyond the realms of home and work.” They promote social equality, create habits of public association, and offer psychological support to individuals and communities.

Recent work in this area (Gooltz (2007) and Soukup (2006)) suggests that social networking websites are fast becoming the new Third Place. These third places are increasingly becoming the sites of interaction and collaboration, building a sense of togetherness and connection. In their paper, Kietzmann et.al (2011) talk about the functional building blocks of social media. These are 1) Presence 2) Relationship 3)Reputation 4)Groups 5)Conversations 6)Sharing and 7)Identity. Our presence indicates where we are, in the virtual world (e.g. logged into Facebook) or in the real world (e.g. a FourSquare checkin). The relationships block represents the extent to which we relate to other users, via liking, sharing, following or becoming a fan. The groups functional block represents the extent to which we form communities and subcommunities. Sharing represents the extent to which we exchange, distribute, and receive content. Conversations occur via blogs, articles, tweets, comments etc. These building blocks each represent a specific facet of the social media experience, and create the activities and meanings that are derived from engaging in social networking. These contribute to creating the new “third place” of conglomeration.

Firstly, I do think that my question is answered, social media is a place. Social media sites become the platform for engagement, participation and sharing. So what does all of this mean for us? As users- no, maybe now I should say inhabitants- of social networking sites?  What takes us there, and keeps us there, is our very atavistic desire to connect and collaborate. In a world where physical third places are rapidly becoming out of reach (either too expensive or too far), an internet connection is all we need to be transported into another world.

Oldenburg calls third places “great good places”. By the same corollary, these technological sites of interaction are places for the greater good. Where collective sharing of thoughts, ideas and knowledge is giving form and shape to a collective consciousness that encompasses us all. Where we gain not only knowledge, but support and encouragement and hope. Sometimes, reading a random blog post keeps my spirits up through tough times. Sometimes, I ask for technical help and get it. Sometimes, I reach out across the internet to extend support to somebody. And it is not because we are all technologically savvy that we connect via social media. It is because we are human.

let me welcome you to active SCN membership and congratulate you on your first blog.

It's very cerebral and I am looking forward to more in the future. It certainly is facinating how social media is changing our culture; those who say it's not true are missing something, I believe.

One thought: maybe next time you could have some sub-headers, just because it's a lot of text. But, I found it very easy to read.

Thank you so much, I am really happy to be here!
Yes, I will keep your suggestion in mind for next time, it will definitely make the post more readable.