Installation Options for Process Integration and Orchestration Use Cases

We recently have received many questions about the new Java-only installation options and whether the PI dual-stack is still supported or not. Rumors are spreading that the dual-stack won’t be supported with the latest release. I have read this in many blogs even on SDN. This is actually not the case. In this blog I would like to take the opportunity to squash those rumors, and to help to shed light on the various installation options that SAP provides in the area of Process Integration and Orchestration.

First of all, SAP will continue to support the PI dual-stack with the upcoming releases. The PI dual-stack won’t go away on the short term, at least it will be supported until extended maintenance of the NetWeaver release 7.3 which is until 2020. However, our main development effort is targeted at the Java-only installation options. New features, functionalities, and further enhancements will mainly go into the Java-only options. This does not mean that the dual-stack won’t benefit at all from the latest development enhancements. Since the dual-stack comes with an Adapter Engine that runs on the Java plattform, some new developments will also be available here.

Secondly, we can tell that we are in a sort of migration phase currently from dual-stack to Java-only. And this brought up quite a lot of new installation options. I admit that we haven’t been very fortunate in choosing proper names for the new installation options. So, all this ended up in the confusion we currently have. So, let me try to sort this out by providing you an overview of all relevant installation options that we have right now including main characteristic, supported releases, and use cases, see table and figure below. Note, that in figure below I have not included the PCK since it has been replaced by the AEX with 7.31.

Also, for a better understanding a bit of history. We actually started our journey towards a Java-only integration platform already with release PI 7.10. Here, we provided a possibility to bypass the Integration Engine in the PI ABAP stack during message processing, hence using local processing in the Adapter Engine. The intention was to reduce the hardware resources needed, the internal communication as well as the DB access points with the overall goal to increase the message processing performance in terms of message throughput and response time. This was possible for specific scenarios only, i.e., scenarios that did not need any capabilities that purely resided on the ABAP stack at this point of time such as various adapters and ccBPM. We liked to distinguish this new feature from a pure Adapter Engine, and hence from then on we called it Advanced Adapter Engine (AAE).

Besides the AAE, from 7.30 on it was possible to install the Adapter Engine as standalone, the so called Advanced Adapter Engine Extended (AEX). From connectivity and messaging point of view, the AEX does not differ from an AAE. However, former comes with an own SLD, Integration Directory, ESR, Monitoring, UME, etc. So, it can operate on its own.

The only major feature missing on an AEX is supporting integration processes. On PI dual-stack, this is addressed by ccBPM which runs on top of the ABAP stack, and hence is not available on a Java-only server. So, with 7.31 we came up with the so called Process Orchestration (PO) which is a co-installation of the AEX and BPM/BRM usage types. In the long term, the PO will become our integrated stack offering where you can run any kind of scenarios, let it be stateless message processing, staful so called integration-centric processes or human-centric processes. With beginning of the 7.31 Ramp-up, the PO is however primarily targeted at exisiting BPM customers who like to benefit from the enhanced connectivity and mapping capabilities provided by the AEX. For integration-centric processes, we follow a different approach: we will deliver typical Enterprise Integration Patterns which are frequently used in real world scenarios. Those patterns will be shipped along with best practices, sample models, sizing numbers, etc., which will guide you through your implementation projects. It is planned to first ship the aggregator, content enricher, splitter, and resequencer patterns with 7.31 SP4 however this is subject to change. We do not like to throw this new option just over the fence, and then leave you alone, instead those patterns will help you to avoid common pitfalls during your implementation projects.

Having said this, I hope this led to a better understanding of the various installation options that we have right now, and also of where we came from and where we are heading to. The clear message should be that firstly we preserve your investment since we still support the various installation options side-by-side. Secondly, yes, we still support the PI dual-stack, but on a long term we are heading towards an integrated stack which runs on Java-only.

Table: Installation Options for Process Integration and Orchestration Use Cases. 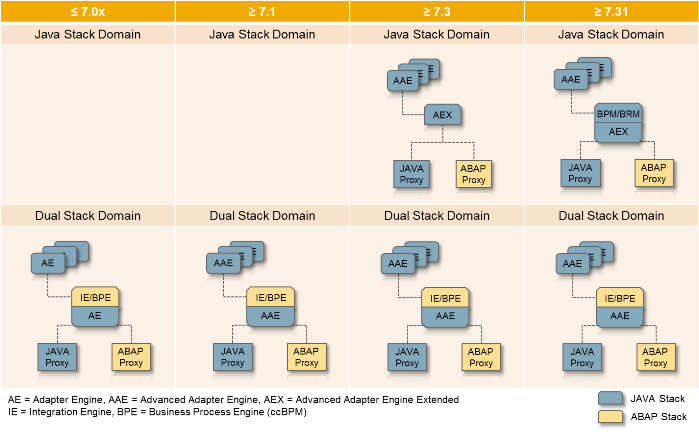 I hope this was helpful information. In case of questions do not hesitate to comment on this blog or directly send me an email.

The above information gives clear view on the Newer versions of PI. Also provides direction and strategy to be followed for new implementations.
Thanks for providing very informative blog.

Excellent information at one place. Thanks..

Thanks for putting information at single place 🙂

Thanks Alex, great information indeed! Appreciate your time and effort.

This avoids many confusions in Dual-Stack Developments. Thanks a lot.

I have a question on the BPM. From what I have read, we are going to change the process moded from  BPEL (ccBPM) to BPMN (NW BPM). In your blog you have quoted the below statement.

"With beginning of the 7.31 Ramp-up, the PO is however primarily targeted at exisiting BPM customers who like to benefit from the enhanced connectivity and mapping capabilities provided by the AEX"

Thank you very Much.

Helped me alot when I am preparing  Sizing and proposals.

really appreciate your work in putting this together.

It gives a very clear picture of PO/PI components before technical architect.

Thanks Alexander. Your blog helped me clear lot of my questions 🙂

an excellent overview. Would be possible for you to update the blog with new stuff around PI 7.4 (mainlly AEX).

Yes, adding 7,4 will be extremely helpful.

Thanks Alexander.  Your blog gave me lot of information i was looking for.

This was a very clear and detailed blog on differences. 🙂

Could you update blog to include 750?