For greater number of Indian Public Sector Company, have the pay date for a particular pay period falling in the next pay period. For example the pay date for March 2010 falls on the April 5, 2010. Here the salary that the employer pays for March 2010 is realized by the employee in April 2010. In the financial year 2010-2011 the first payment realized by the employee is the one pertaining to March 2010 and the last payment is the one pertaining to February 2011.

This basically shifts the system definition of the Financial Year by a month. This requirement can be mapped using, Alternate Financial Year (AFY) functionality, available in PY-IN. For this solution, the Financial Year is defined as March 01, nnnn to February 28/29, (nnnn+1) and this means, Period 01 – March nnnn and Period 12 – February (nnnn+1), where nnnn is a year.

This solution enables the running of the Indian payroll for all employees in line with Indian statutory and customer business requirements, by setting an alternative Financial Year (AFY) in the system as March to February. The statutory definition of the Financial Year still holds good.

These are below mentioned steps to be followed- 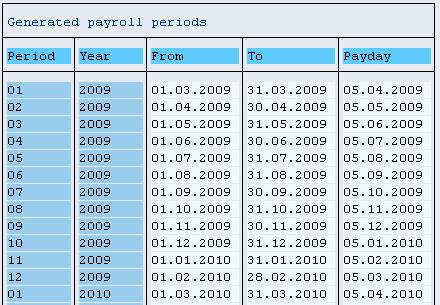 4. Now, generate calendar for cumulations and deductions using the report ‘RPUCTP10’, enter the following values in the selection screen of this report.

Period Parameter – Created in the step 1

For taxation purposes, if AFY is activated:

If you have activate AFY, all the perquisites (Housing, Conveyance, Company loan with less interest rate) will be projected based on March.

If you have activated AFY, the system considers March (paid in April) as period 1 and February (paid in March) as period 12. Anything paid over and above specified limit configured, between period 1 and 12 will be not being tax exempted for that Financial Year.

Although the AFY is enabled in the system, the system will set the following infotype records’ begin date for the current legislative Financial Year will be set as April 1:

Thanks for the useful documentation.