Shuffling two decks of cards: Scenarios for the Merged Cloud Architectures of SAP and SuccessFactors

Currently, SAP’s cloud architecture is based on a division  between Core and Edge (These designations are probably going to change soon). 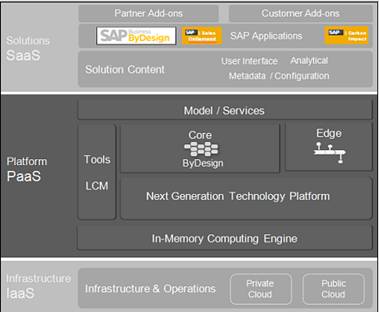 Let’s reduce this architecture to the building blocks that  are most relevant for our discussion and then start rearranging the blocks to  see what possibilities emerge. This simplification allows us to make general  statements about how the two platforms will work together in the future.

Note:  In this blog, I’m not going to  examine the SAP OnDemand offerings in detail. I’m more interested in high level  architectures. If you’d like to get details of these offerings, then I suggest  that you look at my previous blogs on the topic.

Breaking it down to a bare bones diagram, here is what we  have to start out with: 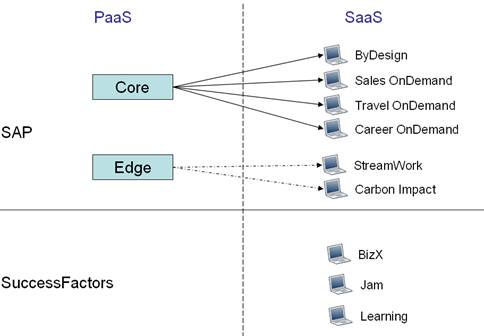 Notes for the diagram:

The need to customize, extend and  integrate enterprise applications is a common one.  Doing this for SaaS  applications brings particular challenges, as those applications run remotely  and historically have been limited in terms of programmability.  By bringing  together Cloud Foundry’s robust runtime capabilities with SuccessFactors’  business processes and data, developers get the best of both worlds.

We have to change our diagram accordingly: 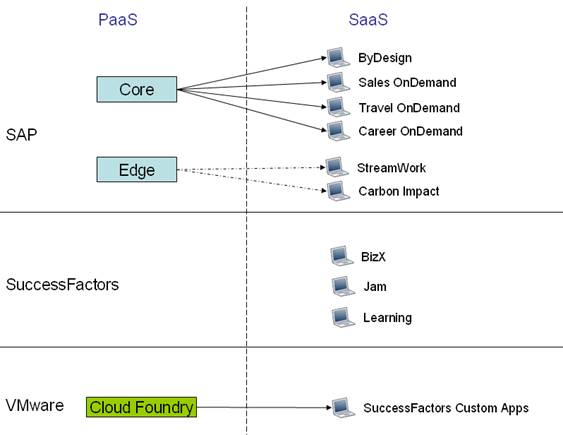 With this foundation in place, let’s examine what technical  scenarios are possible. 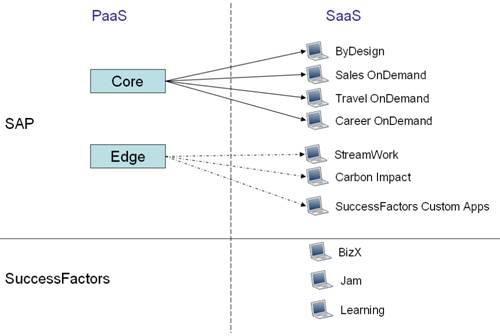 Based on the fact that SuccessFactors is Java-based, there  seems to be a perfect match between SAP’s cloud strategy and that of  SuccessFactors.

We have two applications platforms.  For the Core/Suite Application, BusinessByDesign-based applications. For the  Edge / the Java –based Platform as a Service, and SuccessFactors fits perfectly  into that.  So over time, we expect to stay perfectly loyal to this roadmap –  that we have articulated over the year and bring the power of SuccessFactors and  of Mobility and of HANA to every application from our customers whether it is  OnDemand or OnPremise. 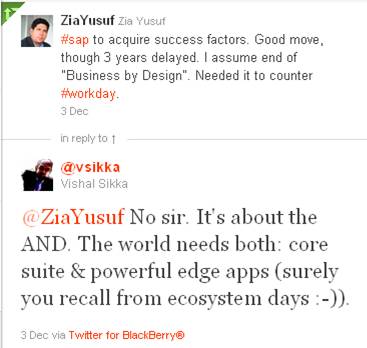 This statement is, however, a very general one. What exactly  are the architectural options that are available?

One idea would be that the SuccessFactors applications run on  the Edge Platform. 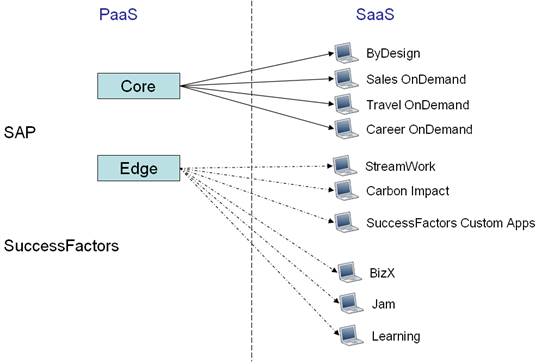 Initially, I was very excited by this option. If set in  motion, it would be a major boost to the importance of SAP’s new platform. But  after researching the technical architecture of SuccessFactors, I feel that this  option might be unrealistic.

As I mentioned in my last blog, SAP plans to acquire  SuccessFactors for its success in the Cloud.

In fact, in the same conference  call, [Bill] McDermott underscored SuccessFactors’ unmatched ability to scale  across big numbers of users and indicated that the company has 5 times more  subscribed seats than any other cloud-based business-software competitor:

This success is largely partially on the existing  architecture, the processes and associated experience that SuccessFactors has  built up over the last decade. This platform is based on a SaaS-model rather  than on PaaS. Why would SuccessFactors trade these material and immaterial  assets for a port to the new platform?

A more likely scenario is that SAP Edge PaaS-based  applications and the JBoss-based SuccessFactors applications initially exist  side by side and are both branded as ‘Edge’ applications – apps that can run  Java-based environments. 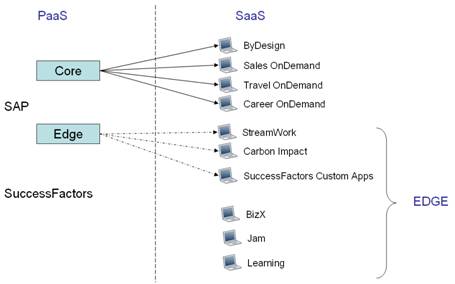 For our analysis, there are two useful aspects when examining  the difference between Edge and Core characteristics as described in SAP’s cloud strategy: technology and application focus.   In terms of Edge referring to a Java-based environment, then  SuccessFactors apps are Edge apps. In terms of application focus, the  SuccessFactors applications are more Core applications. This LoB-associated focus is also apparent in  the the SAP press conference with analysts on Dec. 3:

In addition much of the cloud  market today is a line of business market. These solutions focus on targeted  functionalities and very specific business-users. While companies appreciate the  simplicity of focused cloud solutions, they increasingly require integration  with their core on premise applications. They realize that in a world of hybrid  solutions, they will get most value when they integrate on premise, cloud and  mobile.

That is where SAP comes in with the  acquisition of SuccessFactors. We will be the only company that can offer  end-to-end processes integrating world-class line of business cloud offerings  with the most respected on premise solutions available. [SOURCE]

Thus, you have discrepancies between SuccessFactors’  technical foundation, its application focus and how both fit into SAP’s  existing cloud strategy.

Reshuffle the cards: A new dealer sits at the table

While reading various blogs about the SAP SuccessFactors  deal, I read one paragraph that made me spill my coffee.

SAP is the company that has the  most intellectual property and the most applications for the last 40 years since  Hasso Plattner started this company. We can take all of that IP and put it on  our platform and we can compete in every market—and even more exciting, compete  in markets that never existed before! Create incredibly lightweight,  beautiful applications—more beautiful than the iPad—for all users, everywhere in  the world. 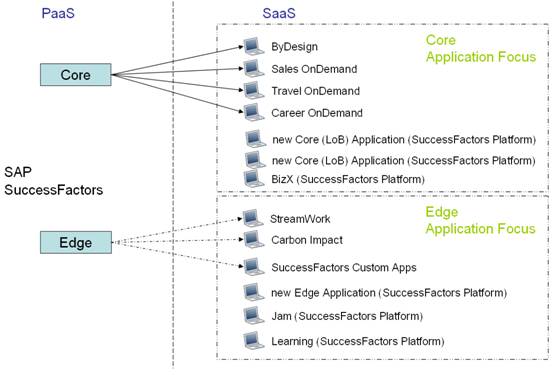 We should also recall that Lars is going will lead SAP’s cloud efforts as a member of the executive board [SOURCE], so his intentions aren’t to be ignored.

If this new type of application emerges, it will be curious to see if  they will be marketed under the SAP or the  SuccessFactors brand.  It will also be interesting to see if these new  applications threaten functional areas that are now currently covered by  Business ByDesign.  As ByDesign is a complete integrated suite, it  will definitely be a challenge for Lars to select those use cases currently  covered or planned in ByDesign that might be ideal for the SuccessFactors  platform.  A complete port of the entire ByDesign suite to the SuccessFactors  platform is a technical possibility (remember all that great IP) but is probably  not an option at this point due to the costs (in terms of time to market delays  and development resources) involved in such an endeavor.

Porting the existing LoB OnDemand applications  (SalesOnDemand, Sourcing  OnDemand, etc) might be an option. The tight integration of SalesOnDemand  with the existing SAP Core PaaS would make a port to the SuccessFactors  platform, however, a challenge.  I hoping that the features in these  applications that have emerged over the last year based on SAP’s co-innovation  with customers and design thinking won’t be lost in any future transition.

I see these changes occurring in the mid-term as the cloud  strategies of the two companies co-mingle and the synergies between the two  platforms are explored.

Long-term developments are more difficult to judge.   Obviously, some consolidation is necessary between the offerings / products of  the two companies.   Currently, SAP has a broader approach focusing beyond SaaS  to the creation of two PaaSs that enable the involvement of a wider circle of  developers dealing with a much greater variety of applications than that  currently faced by SuccessFactors. Although very successful with their focus on  single SaaS offerings, SuccessFactors has had the ability to concentrate on niche  products. It will be interesting to see how the involved technology, experience  and processes deal with the new broader scope.  Although Lars heads SAP’s Cloud  efforts and can rightfully brag about his successes in the marketplace, he would  be wise to consider the impact of his expanded mandate and listen to his new SAP  colleagues and their motivations and experience which are the foundation of  SAP’s PaaS platforms.