Razors and Blades: Nothing Wrong with the $199 BlackBerry PlayBook

I don’t think you can compare HP’s $99 TouchPads with RIM’s $199  PlayBooks. The former was a fire sale by a company exiting the  (non-Windows) tablet business. RIM, on the other hand, is showing its  firm resolve to stay in the tablet game.

I once proposed that a formula for determining user satisfaction for a tablet would look something like this:

The PlayBook is a nice, fast piece of hardware with a slick UI.  But its $499 price was too high. And the app selection for the PlayBook’s QNX OS remains slim: about 1,600, as of late November 2011.  (According to a PlayBook user Peter Hansen, PlayBook users who search App World from within their device will actually discover more than 4,200 apps.)

One of those had to change for RIM to change the equation. Obviously, cutting the price was faster.

RIM is definitely losing money with each PlayBook. Amazon probably loses about $3 for every $199 Kindle Fire it sells.  The PlayBook is identical to the Kindle Fire, except that it has more  storage, a camera and nicer casing. And many PlayBooks were manufactured  and shipped to stores even before the Fire was announced.

So let’s be  conservative and assume that RIM loses about $50 per PlayBook sold.  If RIM sells a million PlayBooks this Christmas, that’s a $50 million  loss. That’s not that much. It’s less than one-eighth of RIM’s net  income for one quarter. RIM would still have $830 million in cash.

The upside is that developers suddenly have a reason to build for QNX  again. Some already did. Read this blog in BerryReview by one  developer, who claims he’s already earned about $100 an hour for a PlayBook app after just four days of availability.  That’s far more than he’s earned on apps he’s built for iOS and Android.  And that creates the positive feedback loop that will generate  customer buzz, boost brand value, and eventually allow RIM to raise the  price on future generations of PlayBooks.

That’s the epitome of the well-known strategy of giving away razors in order to sell the blades. Or, to modernize it, selling the printer at a low price in order to profit on the toner or ink.

The tablet market, like all mobile markets, is still up for grabs.  Hardware lifecycles are short – 1-2 years. That’s why we’ve been able to  see some mobile vendors rise incredibly fast, and others plummet like a  rock.

I think RIM’s other coming moves – like the Mobile Fusion tools for IT, and Android app compatibility – will only build on the momentum it’s building today.

The ironic thing about the PlayBook is that RIM must now hope that  the Bring Your Own Device trend, which has hurt it in smartphones, will  help bring many PlayBooks into enterprises.

But that’s the way it goes. In the new era, most organizations will  have to deploy its own tablets as well as accommodate ones brought in by  employees, according to the Universal Declaration of Workers’ Mobile Rights in the newly-published book, Mobility Manifesto: Transforming the Enterprise.

You can download the Manifesto at www.MobilityManifesto.com. And take a 5-minute quiz to find out where your organization ranks on  Mobility – a Laggard, Rookie, Dreamer or Leader. We’ll compare those  results graphically against your peers worldwide (see below). 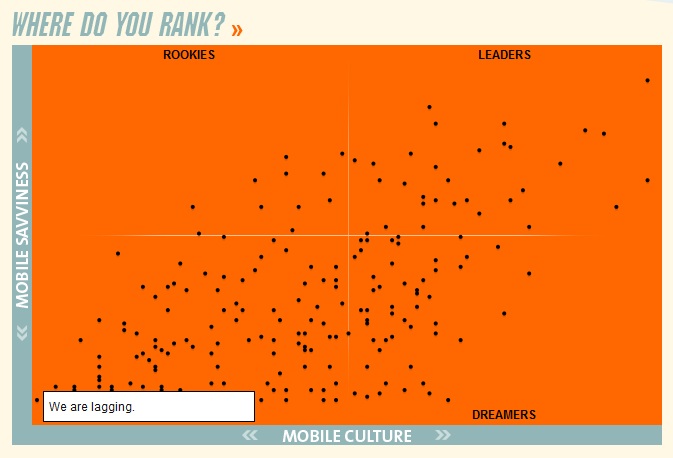