In this second episode of my #AndroidForEnterprise series, I’ll zoom in on the Market. Notice that the word market is  pretty ambiguous. I could be refering here to the Android market, to the  smartphone market, or to the Saturday morning flea market where they  sell second hand devices.

In fact, I’m talking about  all of them. There’s multiple angles at work here and the first one on  which I would like to zoom in is the Android market share in the  smartphone landscape. 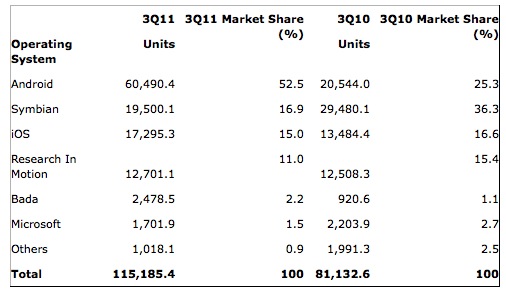 According  to Gartner, Android had a whopping 52% market share in the smart device  market in terms of sales during 2011 Q3. That’s enormous. That’s more  than all of its competitors together. There’s even more, because this is  only half of the picture. Thanks to its dominance and popularity, other  Mobile Operating Systems (MOS) introduce support for Android apps via a  Virtual Machine.

PS: I’m missing a legend on above  chart, but based on some other figures, I assume the units are in K. (So  60M Android, 17M iOS sold) The dip in iOS can be explained because of  the pending release of the iPhone 4S.

Blackberry’s latest toy, the playbook has a VM built in, which allowes it to run Android applications with some restrictions.  With the playbook being a tablet actually running on a competing  operating system, it’s not fair to add this percentage to the  marketshare of Android smartphones.

None the less, RIM’s new operating system, BBX, is also to feature this VM out of the box and will be running on smartphones.

That’s however still future music. What already exists today is the Myriad Dalvik VM for other mobile operating systems, such as: Meego, Maemo, and potentially even on iOS. (Although this last one may require a jailbreak so I wouldn’t encourage enterprises to go that route)

It’s  very difficult (impossible) to find reliable figures in terms of number  of actual active devices. This makes it nearly impossible to compare.  None the less, CNET has done a valiant effort at putting iOS and Android head to head.  I personally do not have this ambition, moreover since I like both, but  I realize how much enterprises rely on figures and facts, hence the  link.

The popularity of Android however does show the  amazing potential it has. There are clear indications that Google’s  platform is quickly gaining ground and must not be ignored. If an  enterprise wants to do something around mobility, but does not want to  support development for all different operating systems, than choosing  an android skillset will cover a significant number of devices. (As will  iOS, but again, I’m putting Android in the picture. Maybe one day I’ll  write an #iOSForEnterprise too…)

And that’s only the smartphone market. There’s also tablets, rugged devices, on-board computers,  in house appliances and God knows what else… In each of these areas,  Android is quickly gaining ground. So it becomes increasingly more  interesting to start investigating the technology and look for ways to  exploit the potential of this platform. 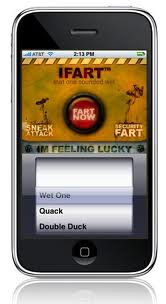 The  platform in itself already holds a huge potential dus to its market  penetration, but the entire development community behind it may prove to  hold even more value. Android is an open platform and thus sports the  free spirit of open-source. App developers around the world seem to be  embracing this spirit resulting in a vast majority of applications in  the market to be free of charge. And they’re not all ****-apps. There’s document viewers, Autocad viewers, note applications, collaboration tools, barcode scanners and so much more usefull tools in there that I won’t even think of making a list.

There are currently over 300,000 apps in the Android Market. AppBrain has a very nice tool to keep track of all apps in the Android market  and to catalogue them in low quality and regular apps. There’s a lot of  rubbish in there, but we can also see that there’s well over 200,000  good applications.

The AppBrain Free-vs-Paying metrics  show us that 2/3 of apps in the market are for free. Deducting the 100K  useless apps (worst case, but plausible scenario), you’re still left  with 100K+ good, free apps. That’s nice. And that’s only the official  Android store. Who knows what goes round in the proprietary store and  the grey markets?

Although  it may seem completely irrelevant, the flea market is actually very  important. What happens with decomissioned devices? Suppose a device  gets lost or stolen and is sold on the flea market, containing  enterprise data… Not so good!

Google introduced device management on Android (amongst others) which allows an administrator to setup  password policies, device encryptions, sync options and much more to  protect devices in the enterprise. Admins can also remotely wipe devices  and remove any information linking it to the enterprise. On top of  that, the user himself can remotely lock, kill and wipe a device, or  locate it on a map. Comes in hand when the police shows up…

As  we look at the market for Android from different perspectives, we see  that the appeal to invest in Android as an enterprise supported  technology is high. Google introduces more enterprise functionalities  into their mobile platform and developers supply vast amounts of  applications.

This article is a part in the #AndroidForEnterprise 1: Management Overview series

also appeared on my personal blog