This year’s Eclipse Con Europe was as exciting as one could have expected. Nestled in the historical city of Ludwigsburg, the conference venue Forum Am Schlosspark is the first thing which catches your senses.

For those who don’t know, Eclipse Con Europe is a premier eclipse conference which brings all Eclipse committers, contributors, users and enthusiasts together. A 3 day event which boasts of numerous exciting talks and plenty of beer. This time it was held from 2nd-4th of November. 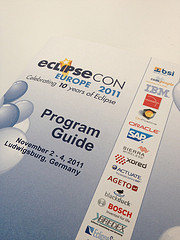 I got the opportunity to attend the conference thanks to the wonderful initiative in the TIP Core by Bjoern Goerke.20 people from TIP Core were selected to attend a conference of their choice all over the world. Once I got selected it also enabled to submit my talk for Query2  and as it happened it also got selected.

This year’s event was more special because  this was Eclipse 10th Birthday and it was celebrated wildly and grandly in the  conference. In this blog I divide it into two posts as there were numerous talks attended and i have lot to say.

I would just give some brief about the talks which I attended and felt important .Also post some relevant links. Such that it acts as a heads up for the concerned technology.

First day started with Jubula for me. Jubula is a nice UI testing tool which was donated by Brendex as a part of their GUIDancer tool. It is meant for the testers only where no coding is required to write UI tests. The only con which I found was it is bit complex to learn and involves a lot of time to learn. More details here http://eclipse.org/jubula/

Dr. Jan Koehnlein of Itemis gave an interesting insight into contemporary graphical editing. He demonstrated a new way to create Graphical editors. i.e. to write a textual DSL for Graphical constructs and a stylesheet DSLs for adding styling capabilities to the graphical editors.He also showed what are the drawback of exsisting GUI technologies.His blog summarizes the concept very well here http://koehnlein.blogspot.com/2011/06/using-xbase-to-define-generic-graphical.html 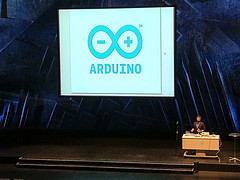 It was followed by a hilarious keynote given by David Cuartielles on Arduino which is an open source hardware platform. More Details here http://www.arduino.cc/. There was a talk on Virtual EMF.It a tool which enables users to efficiently access, handle and combine  a set of interrelated EMF models in a completely transparent way.More  details about the project here https://code.google.com/a/eclipselabs.org/p/virtual-emf/

Collaborative modeling was a new buzzword in ECE 2011 and is also one of the pertinent requirements for the enterprises. Collaborative modeling would mean Collaborate while you work on EMF models. Comparison, merging and source code managment of EMF based models. There has been some nice work going on the Dawn project which is again based on the CDO project. It is the collaborative way to work on your user interfaces for EMF models which are CDO based. EMF Compare as a modeling comparison framework has been used and integrated in many eclipse modeling projects. New project called Mylyn modeling bridge has been introduced. This would mean context based working on the EMF Models and subsequently on the graphical editors which are GMF based.More details about the session here http://www.eclipsecon.org/europe2011/sessions/collaborative-modeling-new-deal

Spray is a one project which caught my attention. Spray aims to provide Domain specific language (DSL) to describe visual DSL editors against the Grapiiti runtime and provide boilerplate code for the Graphiti editors.