A Smorgasbord of BPC Goodness

My last week can be summed up by one word: Mega.  For me and the other attendees, the BPC 10.0 Mega Elite Enablement meant a week jammed-packed with Mega education, Mega networking and Mega long days.  The Enterprise Performance Management Customer Solution Adoption team (“CSA” – the former Regional Implementation Group or RIG) has hosted BPC Elite training for SAP implementation partners and internal consultants on several occasions, but this was the first time that such a training was opened up to customers like me, and the CSA team set out to make it even bigger and better.  I took the title of this blog from Jens Koerner’s opening keynote, and abiding by the unwritten SCN rule of using the word ‘smorgasbord’ no more than once per year, I waited until November 22, 2011 to publish this blog (read my November 19, 2010 blog titled The specified item was not found.).

Going in, I had high expectations for the educational content for the week, and after successfully making it through (yes, I consider that an accomplishment), I can honestly say that I was overwhelmed with the quantity, depth and quality of the materials and hands-on interactions with the systems.  Over the course of the week, we interacted with SAP BPC 10.0 NW, the underlying SAP BW 7.3 system it was installed upon, SAP BusinessObjects Intercompany, and SAP Disclosure Management.  Those who chose the functional track on Thursday also got to play with BusinessObjects Webi and Dashboards.

While I won’t go into details of each day of the agenda, I will confess that my favorite day of the week was Tuesday – a day that truly appealed to both sides of my uber geek personality (I’m a CPA that has migrated his way into the IT department).  The day began with the masterful David Dixon deftly explaining the concepts of financial consolidations to a room full mostly of non-accountants before eloquently enlightening the audience on how to configure the BPC Business Rules to properly generate consolidated results in the system. 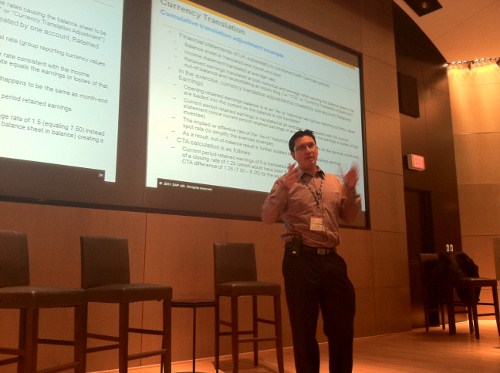 After David wrapped up the lecture portion of the day, we then spent most of the rest of the day building out an end-to-end scenario of a month-end consolidation process including entering an ownership structure into the new BPC Ownership Manager, configuring consolidation and intercompany eliminations Business Rules and setting up Controls in BPC.  We then executed the simulated month-end close process, utilizing many of the new features that are available in BPC 10.0 by:

1)     loading data into the Intercompany application and reconciling intercompany Sales and COGS at the invoice level,

2)     loading financial data into BPC through a Data Manager package in the Excel add-in,

4)     executed currency translation and consolidation functions in the Consolidation Monitor,

5)     analyzed the consolidated results using the EPM Add-in to ensure that our configuration of the Business Rules was valid,

6)     created an extract of BPC data for the purposes of loading to Disclosure Management,

After all of that, we even got a chance to follow through the scenario with a subsequent consolidation in the next period by configuring Balance Carryforward, and executing a change in ownership of existing entities as well as acquisition of a new one.  Just for this day alone, the hands-on exercises covered 269 pages.  Sound like a lot for one day?  Well, it was…

With the exception of David Dixon, the presentations were delivered by the CSA team, led by Jens Koerner who acted as host/emcee/presenter/facilitator throughout the five days on-site.  It doesn’t take long to realize that the CSA team really, really knows their stuff and it was very evident that they spent a LOT of time preparing the conference materials and hands-on exercises.  The hands-on exercises were written with precision and included meaningful explanations of not only what you needed to do, but why you were doing what you were doing.  It’s the latter that made this training so valuable – understanding why is what really allows you to go back to your project and apply what was learned to your situation.  The CSA team was extremely attentive to those who may have gone astray during the exercises (most of the time because the user—including yours truly—didn’t thoroughly follow the directions) and they even went above and beyond by answering client/company specific questions that were not related to the exercises.  The training ran like a well-oiled machine–there were virtually no hiccups–and it seemed as though it had been delivered many times before.  I really can’t extend enough compliments to those that made this event happen.

Not only did the training include the BPC brain trust that is the CSA, but it also included customers, partners and consultants who have a very firm grasp of the product and have been involved in implementations for many years.  There were also several members of the BPC Development team who made their way from China to be in attendance, as well as, a few members of the SAP Support staff who are the first line of defense for BPC-related Service Marketplace messages.  There were two separate evening events held in order to network with these like-minded people, and I was able to take advantage of this time to understand their experiences in hopes that I can leverage these relationships as part of my current and future projects. 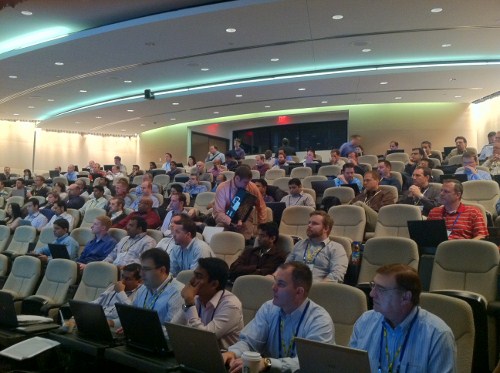 We nearly filled one of the largest (if not the largest) rooms in anSAP office in the US.
Photo courtesy: Jens Koerner.

Each day began promptly at 8am and concluded at 6pm (at least one day was even later), with only a few short breaks and 1 hour for lunch.  This made for long, brain-draining days because there was so much content to consume, but as someone driven to learn as much about BPC as possible, I wouldn’t have it any other way.

It was a fantastic week of BPC training and I hope that the CSA team continues to deliver this type of event.  It wasn’t for the faint of heart or for someone new to BPC, so I’d still encourage those of you new to the tool to attend SAP Education courses before attending a future BPC Mega Elite session.

As an SAP BPXer, I would be remiss if I didn’t note that an ASAP Methodology Add-on has been created for BPC.  I was tickled to learn this as part of the BPC project methodology presentation that was delivered on the final day of the event.