Support Pack 4 for BusinessObjects XI 3.1 was released in June.  This is in exception to the policy as SP5 comes only 6 months after SP4.  SAP Speaker Elizabeth Gorkic said they needed to bring release forward due to legal requirements.   SP5 release is lean with a limited number of enhancements and platforms. 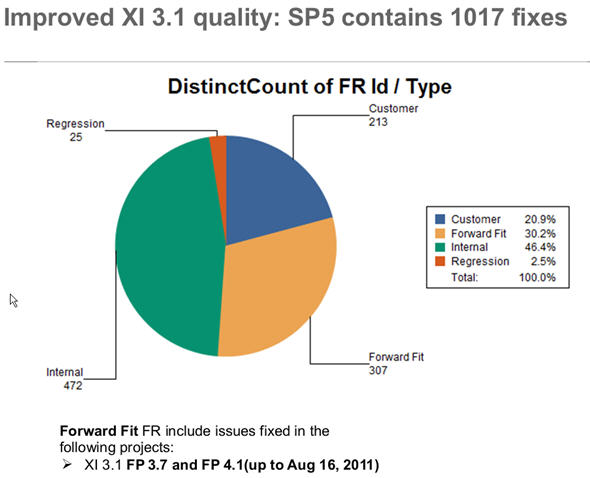 Elizabeth said that the objective of the service pack is to improve quality.  She said in this release, over 1000 fixes were provided.  Fix Pack 4.1 is also planned for December (see Figure 1) 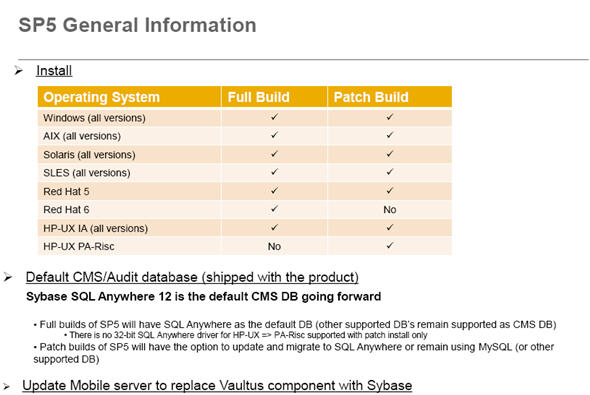 Full and patch build for all operating system except HP UX PA Risc (see Figure 2).  In the second bullet  in Figure 2, changing default CMS data that is shipped with product, SAP is changing from Oracle MySQL to Sybase SQL  Anywhere.  In September 2014 SAP can no longer distribute MySQL  as the contract with Oracle is finished.  This change will give time to OEM partners to change the database, replacing MySQL to Sybase SQL Anywhere for default CMS DB

SP5 will have an option to update and migrate on SQL Anywhere or remain on SQL.  This process is described in full in SP5 Install guide as soon as SP5 is GA.

Architecture change to Mobile server to replace Vaultus component (manages communication between mobile client and mobile server) with Sybase to give a unified .WAR file for BlackBerry and iPad solution.  What do you have to do?  Install server component and new clients will need to be installed – enter CMS name and authorization.  Elizabeth said this is documented in the admin guide for mobile. 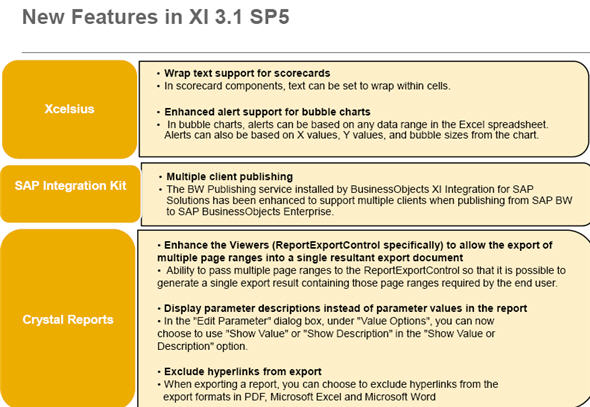 For XCelsius, you can wrap text inside a scorecard cell.  Also enhanced alerts for bubble charts (see Figure 4)

For the SAP Integration Kit the SAP Publishing Service was enhanced for multiple clients.

For Crystal Reports, the viewers have been enhanced for export control.  For the “Exclude hyperlinks from export” the feature is limited to the Office 2003 format.

There were a number of change requests implemented for Web Intelligence and will be listed in the bug fix report. 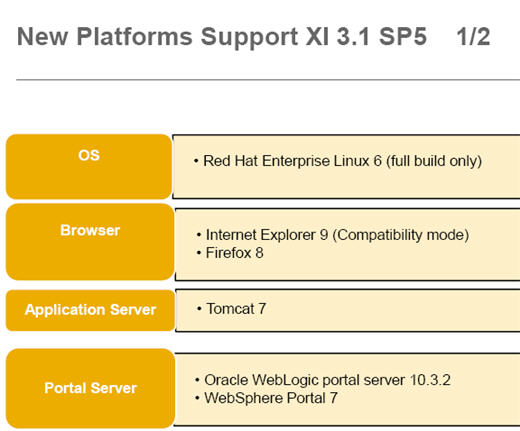 Figure 4 shows new platforms and support for IE 9 in compatibility mode.  In terms of browser support, SAP is working closely with Microsoft to provide faster support on browser releases.

When will IE9 be supported in a standard mode?  That is a BI 4.0 feature; they do not plan to support it in the 3.1 codeline.  The reason is that the some of the components code is geared towards IE 7 and would require substantive code changes for standard mode

Elizabeth said they spoke with Microsoft who indicated that there is no functionality lost with compatibility mode or security issues compared .

A Firefox strategy is in place.  Elizabeth said they will do their best to test Firefox in a couple of weeks of compatibility; they may not always be able to fix issues in time and will document limitations in SAP note and fix in the next deliverable 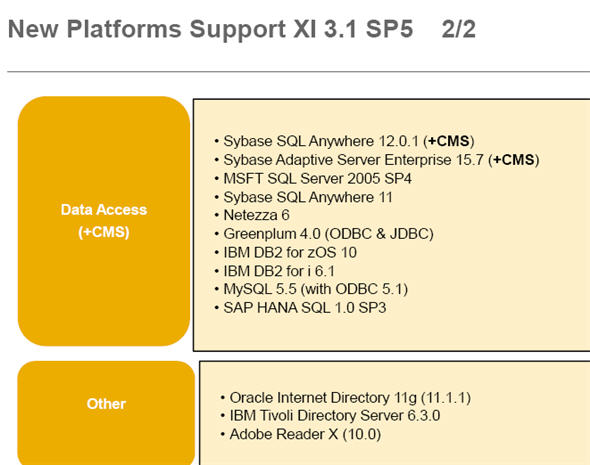 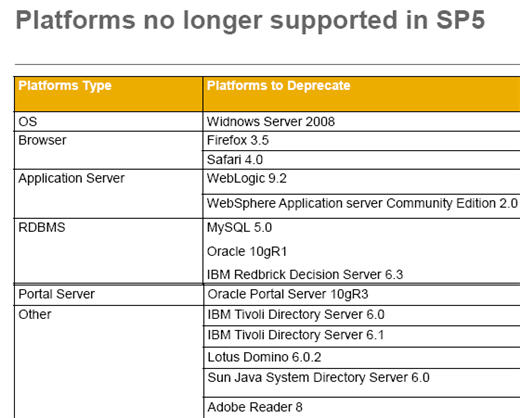 Figure 6 shows the list of platforms discontinued in SP5 as many are end of life by the vendors.

Q: What about Windows Server 2008 support?

A:  SP2 is supported, unless end of life by Microsoft

A: Clarification received after the webcast:

Here is a more comprehensive answer, per product.

The following upgrade paths are supported:

Q: Do we have a full build for desktop client tools in SP5?

A: Yes, all are available as full and patch build

Q: What is the architectural change of mobile platform

A: Vaultus component is now changed to Sybase; should be transparent to you.

Q: Are there any specific enhancements for the CR Viewer BOE .net SDK’s in SP5 ?

A:  What is listed in the slide is all that is in SP5

Q:  Will Xcelsius have a full install and patch install for SP5

Q: Will a bug fix document be included when the product is GA?

Likely not on a 3.1 line; no firm plans yet.  Looking at next minor release of version 4.0 later next year.  Chrome support is in the backlog.  Biggest challenge now is Firefox to support the way they come out.

A: SAP does not do anything special for Netezza when it comes to stored procedures.

For the general case:

–          SAP used to have what was called a “stored procedure Universe” in BOE 3.1 with limited capabilities. SAP no longer has that and is waiting for a more comprehensive solution.

–          SQL function calls are a different matter. Functions can be called from Universes even if they are not in the UI.