What it means to me to be an SAP Mentor 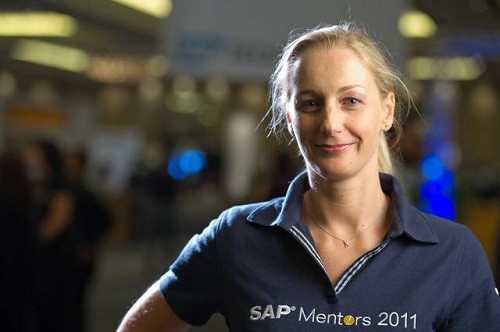 This is the official description of an SAP Mentor Initiative:

“SAP Mentors are the top community influencers of the SAP Ecosystem. Most of the ~100 mentors work for customers or partners of SAP. All of them are hands-on experts of an SAP product or service, as well as excellent champions of community-driven projects. Watch: SAP Mentor Introduction Slides with commentary. SAP Mentor Frequently Asked Questions (FAQs)“

To me, being an SAP Mentor Initiative means much more – and more than I can describe in one sentence. Here is an attempt:

But let me begin from the start…

While working for SCN for three years, I had the privilege of getting to know many of the mentors online, via their blogs, phone calls and projects on SCN. In addition, we got to to know each other in person at the SAPPHIRE NOWs and SAP TechEds in the USA and EMEA. I had always admired this group for their skill set but also their spirit. For such a diverse group, there is incredible team spirit, and many shared values (without acting exclusive).

In my job for SCN, I was responsible for organizing the expert networking sessions in the Clubhouse at TechEd, but I could no longer support this activity when I moved into a new role in the social media area.  Always up for some good fun and challenging the “authorities”, a few mentors decided to start a #NataschaToTechEd campaign on Twitter and SAP Idea Place. They actually managed to get Mark Yolton, the head of SCN, to pay for my trip, and to convince my manager to let me go :-). (THANK YOU!) 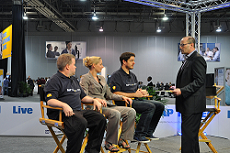 The picture above is taken at SAP TechEd, where Jon, myself, John, and Mark Yolton #nataschatoteched – A tale of two cities. on camera.

That was in 2010, and this spring I became a proud SAP Mentor. It really was an amazingly happy day in my life! I am the first marketing person to be bestowed with this honor and I take it seriously. From day one, I’ve been thinking about how I can make a contribution to the group.

Right after becoming a mentor, I reached out to my new peers via the @SAPMentors Twitter handle, which is always very active, to get some tips and advice on how to make the most out of my mentorship. Some said they thought I was already a mentor and others told me “just keep doing what you are doing”. That warmed my heart :-). I also had some phone calls (you know who you are) that provided me with some very good guidance and ideas. 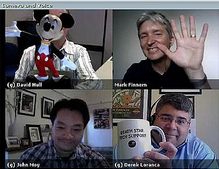 Above a screenshot from the Monday mentor webinar that announced the spring 2011 newbie mentors. Second right at the top is “mentor handler” Mark Finnern.

I also got some hazing. Somebody Tweeted me a picture of a “mentor tattoo”, telling me I had to get one, and there was talk about a mentor hazing “activity” at the next SAPPHIRE NOW conference (more about that below).

Susan Keohan had the idea to organize a flash mob for Mark Finnern at SAPPHIRE in Orlando, and it fell to me as a newbie to take the lead.  Unfortunately, there is no live footage of the flash mob as the video mostly captured the bottom of a (to remain unnamed) person, who was standing in front of the camera.

Here a short clip of what it COULD HAVE looked like. I got to practice the Macarena flash mob moves at Denver airport on route to Orlando with my SAP colleague Birgit Starmanns (directed by TK Ranga):

Mark had also planned some hazing for the new mentors at the “wolf pack” meeting the night before SAPPHIRE NOW.  I had the dubious pleasure of singing “99 Luftballons” (= 99 Red Balloons) in front of the crowd through a megaphone (luck for you, there is no recording):

Singing “99 Luftballons” at my first mentor get together.

It was really great to receive the famous blue mentor shirt, which I put on immediately (of course): How Do You Identify an SAP Mentor (if he/she is not wearing the blue shirt?

The mentor tie (sorry for the terrible shot): 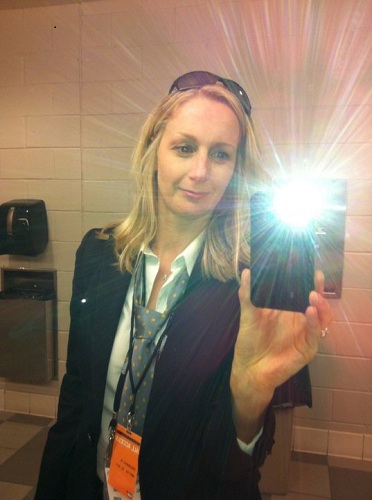 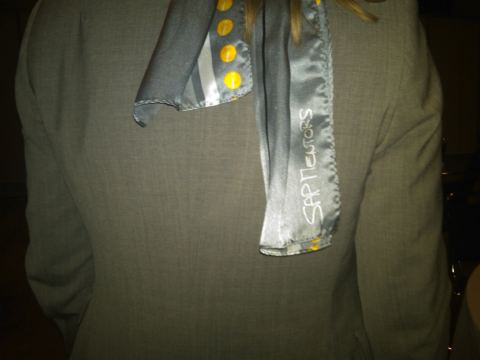 Of course, there are also mentor stickers, but those could be used by “fans” 🙂 (my all-time favorite mentor sticker is “I stop at every user exit”: 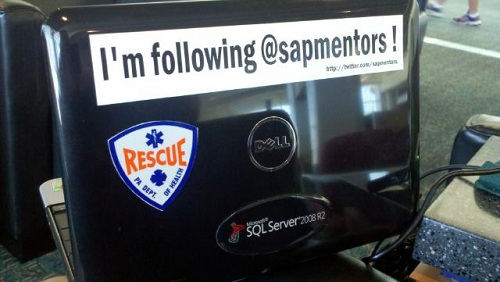 There is so much more to say about the mentors, especially in terms of their product and services expertise and the insane amount of activites they are involved in, including social media. But I hope that my “journey in pictures” gave you a small insight into what the SAP Mentor wolf pack is otherwise made out of: a group of really caring people, who like to help, make a difference and have fun.

If I would change one thing about the SAP Mentor program it would be to give it better exposure. Many people inside and outside of SAP still do not know of or understand the program.  I am in marketing, while most mentors are fairly technical – so I hope to add value by using my (social media) marketing skills to help bring the program to a greater audience.  Let me know if you have ideas to share!

The best picture for last…

I simply love this picture of a group of SAP Mentors at a meeting at SAPPHIRE NOW 2011 in Orlando with SAP Co-founder Hasso Plattner and Co-CEO Jim Habemann Snabe: 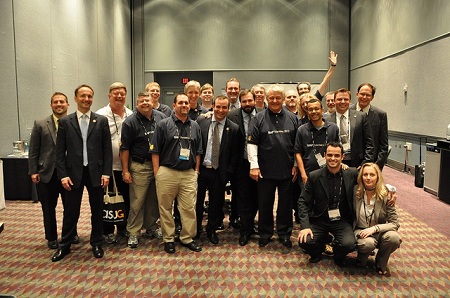 To create some balance (to my view of the world), I sent out a Tweet to the @SAPMentors this morning, asking what being a mentor means to them: