Storytelling and personal branding at the TEDxVancouver 2011 conference 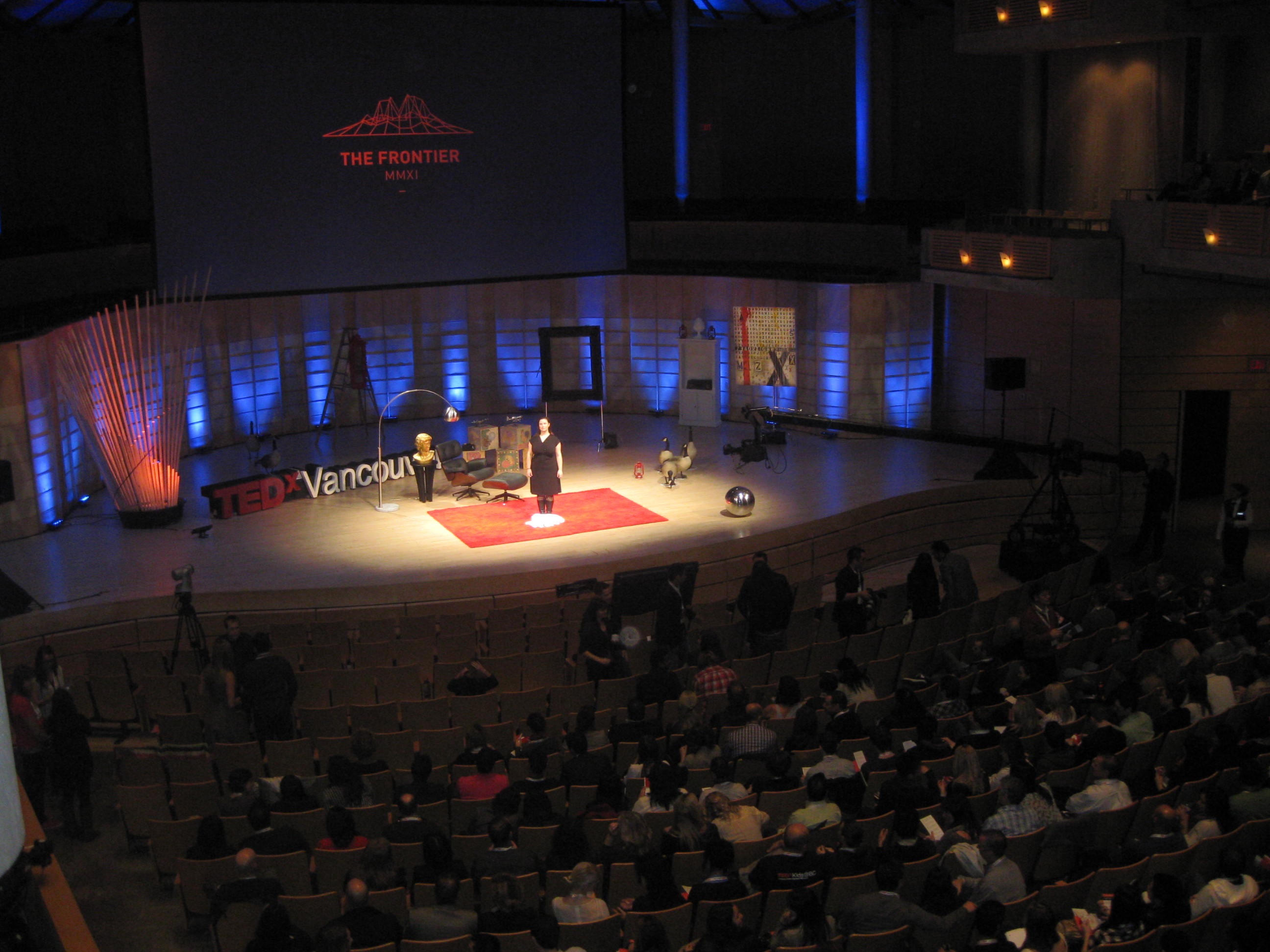 The country’s premier “thought leadership” conference — TEDxVancouver — was held Saturday November 12 at the majestic Chan Centre at UBC. The TED talks’  mandate is to create a conversation about “ideas worth spreading,” and many were eager to be inspired and network with other like-minded young urban professionals.

The event’s theme was “The Frontier”, selected as a reflection of wonders yet undreamt. The focus was knowledge and innovation. TED talks are tremendously successful as a marketing and personal branding tool for individuals. Speakers had to tell a story in 18 minutes or less.

CBC News Vancouver’s Lisa Johnson was the host and the musical performer was the mellifluous local singer/songwriter Billy the Kid. Previously recorded online TED talks were interspersed with speaker’s presentations throughout the day’s event.

The day kicked off with a look at Reid Gower’s  media project, The Sagan Series, which was influenced by the  astrophysicist Carl Sagan and accompanied by an awe-inspiring, slickly  produced video created to promote scientific literacy.

Nolan Watson, a humanitarian and president and CEO of Sandstorm Gold Ltd., stunned the audience with his statement that “compassion kills” and argued that  we mustn’t just donate money unless we know exactly where it’s going. It’s not enough to give to enable sustained dependence, because it  doesn’t solve the root of the problem, Watson said. As an alternative, he recommended paying particular attention to clean water projects and micro-finance loan banks.

Marcin Jacubowski’s online talk about Open Source Ecology and blueprints for hardware technology made available to the masses (so  that anyone can build their own tractor or harvester from scratch, for  example) spawned many cool trailer inventions — and is the first step  in his vision to build an entire self-sustaining village, the audience  learned.

Seth Cooper of Foldit, a scientific discovery game to advance the field of biochemistry, described gamification and video games as the key to solving the future’s scientific problems.

Gen. Romeo Dallaire’s  talk on youth activism and encouraging support of NGO communities around the world was passionate and eloquent, and was one of the biggest draws of the event.

Artist Hasan Elahi’s  very cool talk about his website and his intricately detailed photo  snapshots of his life as a result of his interrogation from the FBI  post-9/11 was quite entertaining.

Jose Figueroa had  everyone on their feet with his impassioned plea for Canadians to  protest and question the country’s existing immigration laws as it  pertains to refugees and the broadly defined view of terrorism. Figueroa  said he felt it was important to distinguish freedom fighters and  government activists from terrorist, a label that he has been given; his  family is now facing imminent deportation.

Dr. Kate Moran’s  talk on measuring the ocean floor using the power of the Internet and  fibre optic cables continued the science theme into the afternoon.

Eli Pariser told us to beware online “filter bubbles” when entering a search term  on a search engine like Google. He cautioned that Google personally  tailors each result depending on the user and what it “thinks” we want  to see. As a result, we don’t get exposed to information that could  challenge or broaden our worldview. Eli Pariser argues powerfully that  this will ultimately prove to be bad for us and for the notion of democracy.

Kara Pecknold showcased a successful design approach for businesses in the developing  world where they have no access to online communications, and  encouraged social enterprise to nurture biking in the city and to help deter bike theft.

Christopher Gaze,  artistic director of Bard on the Beach showed us why he believes that  Shakespeare is in everything we do, and showed us his chops with a  fantastic montage of great Shakespearean quotes.

Stephen Slen and Aaron Coret, partners behind Katal Innovations, talked about their Landing Pad invention and described how it was spawned by a tragic accident involving a routine snowboarding move by  Aaron Coret that left him a quadriplegic in 2005.

Jai’ Aquarian  and Erin Macri’s talk struck a chord with me personally. The duo talked  about our conditioning and learned behaviours as they relate to suppressing our emotions and the feelings of loss and grief. They believe that we don’t have the proper outlets in our society to really let out our emotions or properly grieve. They led the first international crew to build a “community temple” in the  unforgiving Black Rock Desert, in order to have a sacred place toexpress profound emotion.

In the last talk by Emmy-winning producer and father-to-be Victor Lucas,  he read aloud a letter written to his daughter and shared his very  entertaining “3D” rules for life: “Don’t be a dick, don’t dick around and don’t hang around dicks or everyone will think you are one too!”

Though the crowd dropped off at the afterparty at the H.R. MacMillan Space  Centre, a memorable laser light show to the tunes of Radiohead rounded out the evening.

My only criticism of the conference has to do  with the execution of the event and not the content or calibre of the speakers. While the process of having to apply to attend may seem elitist to some, it definitely weeds out the people who don’t really  want to be there or commit to the event.

I applied, but after a  few days I still hadn’t received any official responses to my questions regarding the event. Then I received an email from the volunteer  organizers saying that I could bring a friend to the conference — and  they could now purchase a ticket. This struck me as odd, that they would be struggling to fill the seats with this sort of maneuver.

While the energy was positive at TEDxVancouver, I also think there could have   been more opportunities made available to meet people during the breaks at the daytime event. I noticed that the event had a rich social  media aspect as many were tweeting their experiences during breaks.

I felt most of the ideas were “worth sharing” and every speaker delivered it with passion, backed it up with commitment, and conveyed a sense of purpose in their lives resulting from their vision.

Thought leadership conferences like TEDxVancouver can of value to those who look to in-person meetings to solidify business relationships and their personal brand. SAP and the SCN community can benefit from the innovation, ingenuity and lessons learned from speakers to continue its successful track record.