The SCNotty awards at SAP TechED Madrid 2011 – Announcing the winners

Follow RSS feed Like
0 Likes 318 Views 18 Comments
Introduction
SAP TechED Madrid 2011 has just closed its doors and one of the many great moments I had there was co-hosting the SCNotty awards along with Gali Kling Schneider and Sylvia Santelli. I arrived in Madrid on Monday and I was welcomed as a friend. Once we met, we started preparing for the SCNotty award show. We had already done some preparation and we had our evil plan worked out to some extent. Now all it needed was working out the details. SAP and in particular the SCN team jumped in to help us out and they did. 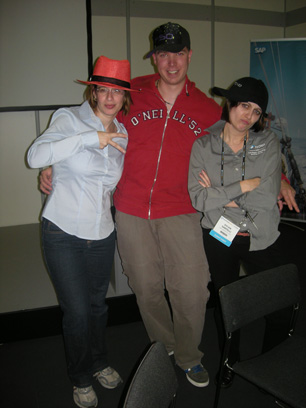 I would like to thank everyone, Jim Spath the SCNotty godfather, Marilyn Pratt, Matthias Steiner, Gali Kling Schneider, Mark Finnern, Aslan Noghre Kar, Sylvia Santelli, Jeanne Carboni and Jason Cao for giving me the opportunity to work with you all and co-host the SCNotty award show with Gali and Sylvia which was an honor.
Announcing the winners
Yet again we had great entries for the SCNotty award show in Madrid 2011. Thanks to all participants for taking the time to create a SCNotty video!
You can find all entries (all means also non-winners) on http://wiki.sdn.sap.com/wiki/display/Community/30+seconds+of+recognition+-+2011+Madrid
You can call up the awarded video by clicking on the award title (which will provide you the video in a separate window).
The award winners
Best (and only EMEA) Solo Performance by a Female
Dilek Adak
Best Animation
Ivan Femia
The Ole Award
Tobias Trapp
Best Musical Performance
Fred Verheul
Coldest Snowflake
Martin Lang
Most Non-SAP Passions Award
Martin English
Best Man in the Mirror
Vitaliy Rudnytskiy
Best Marketing in the World
Greg Chase
Best Honorable Mention
The Dutch Mafia
Casper Ballemans
Peter Combee
Ravi Santani
Roel van den Berge
Sven van Leuken
Twan van den Broek
Not to be forgotten
Matthias Steiner excluded himself from the competition because he was involved in setting up the SCNotties award show but his video deserves a mention as he took my swagger from SAP TechED Las Vegas and showed off his rap skills for SAP TechED Madrid 2011:
http://www.youtube.com/watch?v=7QG2srDbsz4
Martin Gillet created an amazing entry on the way to SAP TechED Madrid 2011 in the airplane with the help of Brussels Airlines:
http://www.youtube.com/watch?v=sdmitiIg05Y&feature=related 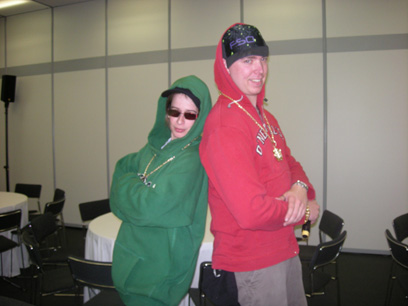 Another blog will follow to fuel the SCNotty awards EMEA for next year. I have been discussing the SCNotty awards of Madrid with a number of persons and decided I should step up and try to make a change so keep your eyes open and spread the word once it’s there.