A glimpse of the Future

IT changes rapidly is a bit of an understatement. If we look at the evolution of the past  40 years, we can however see certain patterns arise which might help us  in predicting the future.

One  of the guys at #Teched showed an interesting slide on the cycle of IT  in enterprises. For copyright reasons, I will not copy the slide in  here, instead, I’ll give you my own interpretation. (Made in Paint) 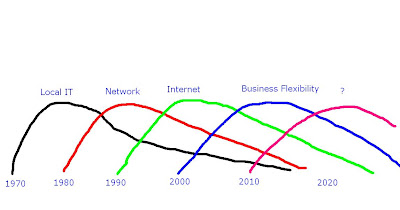 What  we see here, is that there are cycles in IT and especially, enterprise  IT, that mark new era’s in how business organize themselves. In the  1970’s – 1980’s, IT was used in enterprises in a very localized  manner. All data was stored on mainframes which were only accessible by  authorized personell. If business wanted to have a question answered by  IT, they had to submit a form, IT would then scavenge their data for  days and give a printed answer back to business. Back then, we were  happy to have consistent data.

In the 1980’s, 1990’s, local networks became more popular. this means that the data on those mainframes was  no longer only accessible from on the machine itself, but that client  server applications gave wider access to this data. Now, not only local  personell with clearance could scavenge the data, but an IT-Withy guy in  a different location was also able to answer business questions. This  is the time we had access to consistent data so we could make the right decisions.

We all remember the early days of the internet.  By the end of the millenium, every company needed to have a website, so  that they could share information with their customers via the  internet. It was also the time in which the internet also gained  popularity in the enterprise itself. Think of portal pages, search  engines, online document storage etc… during this period, we focused  on process efficiency.

The  last couple of years, we noticed a very strong growth of social media.  Companies start marketing their brand via Twitter and Facebook. They  recruit new employees via LinkedIn and they setup collaboration spaces  in Google+. Although all these applications are on the internet, we do  notice a very big difference with the internet cycle. Here the  enterprises start using the internet from an enterprise user  perspective. A two way collaboration instead of just pushing out  information.

Next  to this socal collaboration, we also notice that more and more of the  IT is being moved to the cloud and that confidential data is now no  longer only accessible through the company’s network, but also via  mobile applications. This trend, of having access anytime, anywhere and  being able to collaborate at will is what we call, the era of business flexibility where we focused on user efficiency.

Worth  to notice is, that all these cycles had a very rapid growth and a slow  decline. To date, some companies are actually still using mainframes,  and I can’t imagine the internet to dissappear from the enterprises any  time soon.

The big question now is off course: “What’s the next wave?”

According to the original author of the presentation (Richard Probst) and many other people (including myself), it’s the internet of things.  What we see is that information became accessible to everybody and  became instant. Back in the days, only a happy few could mine enterprise  data for answers and it took weeks. Nowadays, everybody can mine the  data in a matter of seconds. We can’t win anything in that area anymore,  so instead, we have to win in the area of that other bottleneck: “The  User”.

During  input of information, it’s the user making errors. Replace the human  input by sensors and the number of errors will be reduced dramatically.  During execution of tasks, it’s the human making errors, replace him by  automation and robots and again, the number of errors will reduce  dramatically. During decisions, the human’s emotions interfere with his  decision making. A computer does not have this problem and will make the  best decision without hesitation.

That sounds like a very clinical world. What if we could give the cold machine situational and emotional  awareness, to consider ethical questions? That’s actually already being  investigated today!

MIT introduced for example the MooDMeter.  Using sensors, they can estimate the mood of individuals and large  groups. Adding this to the equasion can make the internet of things less  clinical and more socially accepted.

Leveraging  social media like twitter, and evaluating the “mood” of tweets actually  can already help enterprises in detecting trends on the web and  responding faster to disgruntled consumers. I’ve seen it used in a CRM  demo already.

Today, we are already withnessing the birth of the next Enterprise IT era, which I rather call, emotional IT.

Looking further than that is beyond our imagination and is pure guessing, but scenarios such as the Matrix, Blade Runner or Star Wars still come to mind.

Former Member
November 15, 2011 at 7:01 am
Now that would be a great improvement.  I would love to work from home.  Meet virtual.  When needed meet face-to-face and go to conferences.  Wouldn't that be cool!

Yes I would even wear the weird sensor.  I really have to look that up.

No matter what happens, the future looks good for the IT professional.

Tom Van Doorslaer
Blog Post Author
November 15, 2011 at 8:08 am
It sure does
because we get to shape that future
and I want to be part of that

Obviously the next phase of intelligence is emotion. A lot of successful researches are there to inject intelligence on Machines. So now emotion is the only big thing which is differentiating human beings and machines.... 🙂

@Tom nice piece! At least we want to be part of shaping that future. To what extent we will really accomplish that is another question of course but wanting it is already the right way to go. While things are changing around us and on a global level the rich and powerful still call the shots (way too often).

@Githen I don't know about emotion being the only difference between human beings and machines. A machine that matches a human without the emotion is not there yet either. Yes they are progressing on it but it still isn't there. Sometimes it seems like things are moving extremely fast but humans are also extremely complex and not easy to mimic.

I hope they don't emotionalize all of the machines in the future. I would hate it if my personal computer would deny service because it's tired or doesn't want to be overclocked because it's too hot.

From this I can make two deductions:

B) in order to understand our own intelligence, we have to be smarter than ourselves. (deadlock)

So maybe the idea of going for emotions is the easy way out. We don't always understand our own emotions, but maybe that's the trick. Emotions are not there to understand or explain. So it could be easier to introduce emotion-aware technology than intelligent technology.

Tom Cenens I wouldn't like my car to give up on me because it has the monday blues either. But I would like my car to refuse driving when it notices that I'm in a confused state of mind (or very angry). Or at least tell me to take a walk and cool down for a couple of minutes.

Emotional IT does not necessarily mean that our technology get's moody. It could also mean that technology detects our mood and acts balancing.