Flying back from SAP TechEd Madrid, my thoughts are with the dear friends, good mates, and great collaborators I was lucky to meet during the event. As I reflect my experiences and takeaways, my mind still reverberates strongly with the Inclusion event and particularly the panel discussion, which was a profoundly mind-changing experience. I’ll share why.

Marilyn Pratt was so kind to invite me to join the panel discussion of the “Embracing Inclusion – Driving Innovation (EIDI)” event. (This discussion was actually only the first part of the event, followed by a wonderful Design Thinking workshop conducted by Heike van Geel. The workshop was also important to me but I’ll write about it separately.) The discussion was moderated by Patti Fletcher, an accomplished expert on the topic of women in technology. As a bit of context, I should add that in September, I attended the inclusion event in Las Vegas and felt strongly alienated by the panel discussion there, and I believe that it was because of my post-event criticism (much in line with Matthias Steiner’s articulate and thoughtful blog about the Las Vegas event) that Marilyn gave me a chance to be a contributor at the Madrid event. 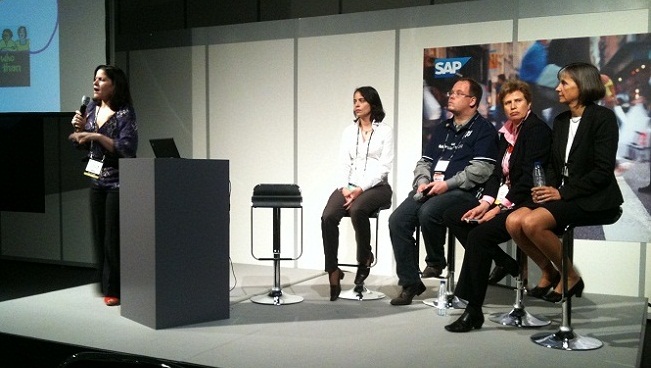 The panel discussion on inclusion was the first part of the event and was conducted in a very participatory fashion, with lots of contributions from the audience. It was my first time on a panel and as the only guy in a panel about women in technology, I was slightly out of my comfort zone, but as soon as it started, it felt really good and getting better all the time. The other participants, the moderator, and the audience were thoughtful and humble and had interesting thoughts and experiences to share. The discussion was actually leading somewhere and produced good results and insights.

Naturally, the topic of “women in technology” was at the center of the discussion. Why are women so underrepresented in the industry and even more so in leadership positions? What goes wrong that keeps so many talented women from being in places where they can contribute to the successes of our projects and companies?

The discussion started with each participant introducing themselves, and although “women in technology” was a natural focus point in the discussion, thankfully we discussed inclusion in a wider sense, and touched on the value of diversity and how we need to break the false assumption that there is only one way to be good, or that different equals worse (I explained that with an example from modern evolutionary theory, where the notion of one contemporary species being less evolved than another one has been abandoned). The discussion also touched on cultural and ethnic diversity and the value of having people with a variety of educational backgrounds and personality types contribute.

Spare your kids the brainwashing

What can everybody do to improve the situation? Looking at the impressive biographies of the other panel members, it became clear that if only the tiniest fraction of university students in a technical field is female, the exclusion of all the others (those who never made it into that lecture hall) is already effective at a very early point in life, apparently childhood and youth. So it’s primarily up to the families to exert a positive influence and send their children a powerful message: “You can do it. You can be it. Anybody who says otherwise is wrong.” That’s a very important thing to learn and I make sure both of my children, a girl and a boy, get it. (Teachers are also a very important influence and you better believe that I will eye my kids’ teachers closely. Just saying.)

Something else we can do is to mentor others. Some of the women who were present explained how much of their success they owe to the encouragement and support of mentors who spotted their talents and helped them get a chance to prove themselves. Imagine how close these women, who are talented leaders or experts and contribute greatly to the success of their organizations, came to not having a seat of the table. What a shame if that talent had gone to waste. By mentoring others, we can help them live up to their potential. Even if we had no morale, we should do it to make these valuable talent resources available to us.

If we can make even a small contribution to peeling away the layers of discouragement and intimidation that keep an excluded person’s light from shining brightly, that’s a great achievement and a very worthwhile thing to do.

This analogy also helps to explain how I have learned to look at people differently. I understand now that in many people, there is an inner flame of talent and passion that shines much more brightly than is visible from the outside, because only a fraction of the light can shine through the layers of discouragements and intimidations that are formed when a person is told: “You can’t do that. You can’t be that. You’re not good enough.” It’s trivial that often, there’s more to a person than meets the eye – but coming away from the event, I understand the reasons and mechanisms a little better and I transform that into action by looking twice, thinking a little more, withholding my judgment a little longer, giving a little more room to people and encouraging them a little more. If done consistently, this is mentoring and it can make a world of a difference.

After what would have been a perfect upbeat conclusion, I have decided to add, for those who appreciate a clear word, another paragraph in which I put my conclusions in a rather drastic way, even if I risk to  appear like a nutcase: It’s the rule of force at work. Some  groups are on top (often but not always  the majority groups) and hold on to their privileges by brainwashing the  rest  into feeling small, incompetent, and worthless. All parties act mostly  unconsciously and the behaviour is in many cases handed down from  generation to generation via cultural tradition. As a result of the  process, many people look  small and incompetent and feel worthless, and society doesn’t benefit  from their beautiful talents. There is a huge potential that could be  freed by removing some of this crippling brainwashing, or doing a little  less of it in the future.

And just to be clear about another  thing, this is not just about women, but it appears to me to be a  universal pattern of discrimination that can be used against any  arbitary group (such as red-haired, gifted, elderly, gay, ethnic groups, etc.).

Creating  a culture of inclusion requires us to develop a keen awareness of these  mechanisms and the willingness to stop doing it, to stop others from doing it, and to start cleaning up the damage that has  already been done.