They say you can’t teach old dogs new tricks. So what about Big Dogs?

For the first 35-odd years of its existence, SAP only marketed and sold its own software. We weren’t a platform vendor like Microsoft (Windows), Google (Android) or Apple (Mac OS X, iOS). So we didn’t need to woo, support or sell other developers’ applications.

It was a self-centered strategy that was borne out of a need to serve the many customers clamoring for our applications, as well as fend off our many rivals – IBM, Oracle, Microsoft and others.

You know how the story turned out: SAP grew to become the market leader (by revenue) in ERP, CRM, and business intelligence/analytics software. The Big Dog, in other words. 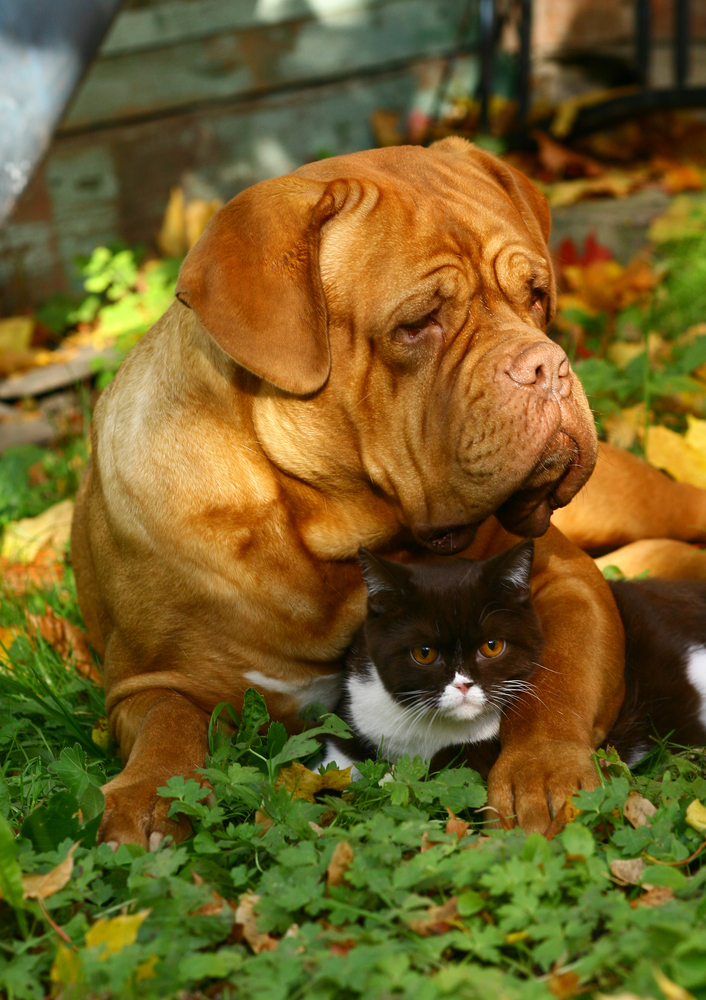 But as the enterprise market matured, it posed major challenges to SAP. Rather than rolling over and playing dead, we learned some new tricks.

One of those was launching the SAP Ecohub, an online marketplace for partner software and solutions, in 2008.  As independent analyst Dennis Howlett put it at the time: “EcoHub is a step in a fresh direction for SAP which has been perceived  as a company that doesn’t sell products that are ‘not made here.’”

Three years later, SAP offers more than 1,000 partner-built applications via the EcoHub and other channels.

Even bigger than EcoHub was SAP’s $5.8 billion purchase of Sybase. Though also falling in the general category of enterprise software, Sybase has always been more of middleware and platform company than applications vendor ala SAP. It’s always cultivated developers and partners to build applications that connect to its ASE database or run on top of the Sybase Unwired Platform (SUP).

With these two moves, the next was a no-brainer: releasing our own Enterprise App Store. Called the SAP Store for Mobile Apps, it opened up stealthily on Halloween with more than 50 SAP and SUP-certified apps from partners today, ranging from sales to productivity to human capital management (HCM) running on iOS, BlackBerry and other platforms. 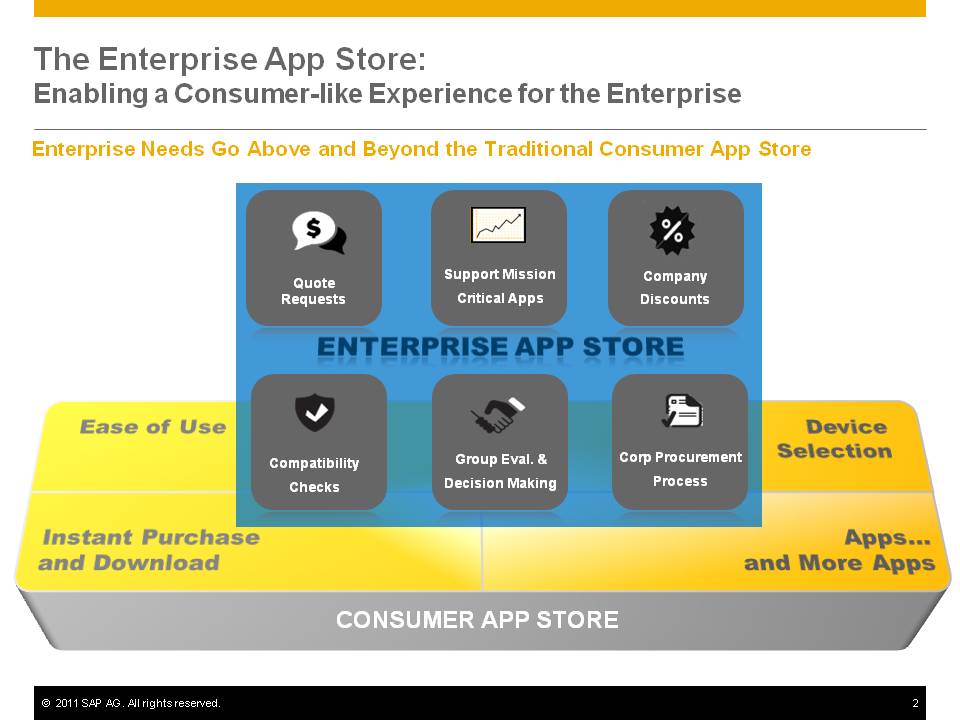 Debuting at the SAPPHIRE NOW + TechEd conference in Madrid this week, the Store is a key part of our strategy to build up an SAP-centric mobile ecosystem. Even as SAP rushes to release more and more apps that connect with our applications, our goal is to have 80% of all mobile apps be built by partners.

So far, we’re not doing too bad. For SAPPHIRE NOW, 20 partners submitted 200 apps to be shown on the show floor. 100 were chosen (check them out at the SAP Partner Mobile App Catalog).

Why are developers starting to come to the SAP Store for Mobile Apps and otherwise build for SAP? I asked Usman Sheikh, the vice-president at EcoHub in charge of the new enterprise app store. He answered my questions and, helpfully, shared these slides. 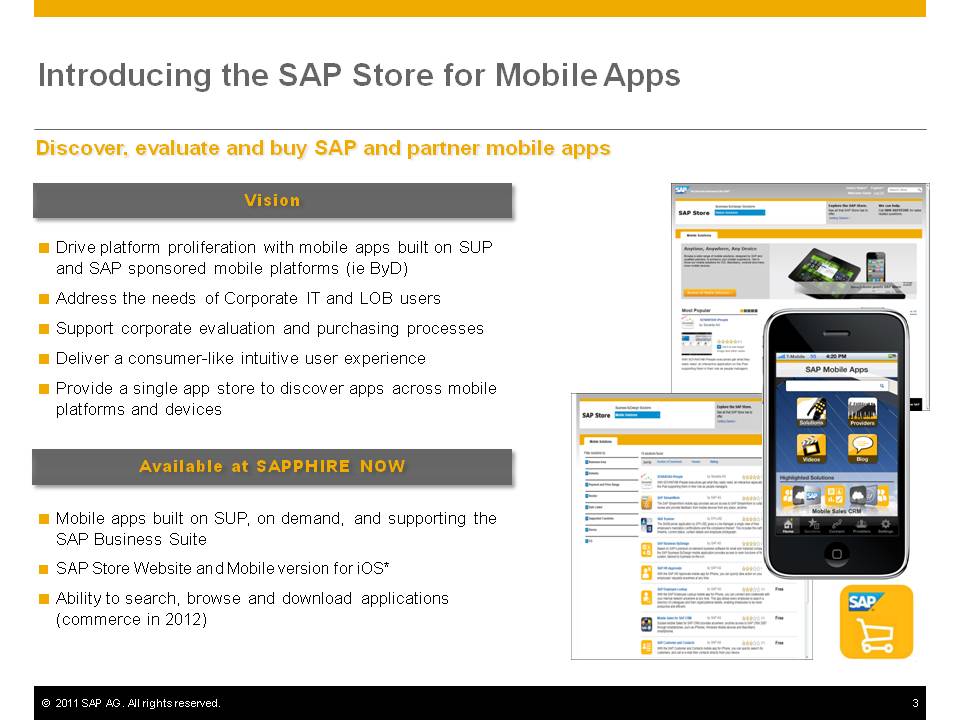 As I discussed in my blog, ‘How Many Kinds of Enterprise App Stores are There Today?’, vendors are starting to deploy their own enterprise app stores, in order to provide a blend of the features in consumer-oriented app stores (easy browsing, instant purchase and download) and the kind of features required by enterprise users: flexible payments (credit card or corporate invoice), company discounts, the ability to check if your device or OS version is compatible with the app, as well as certification (by SAP) that apps will work with back-end systems, confirmed Sheikh.

Other features include pre-sales support for potential customers. These include a 1-800 number and chat and e-mail to reach SAP reps as well as the original partner developer. This supports the higher-touch model preferred by customers forking over not $1.99 per app, but potentially hundreds of dollars or more.

To accommodate line-of-business users who prefer to quickly get the app running in order to kick the tires themselves, SAP is offering its app store as an iOS app. See the screenshot below. 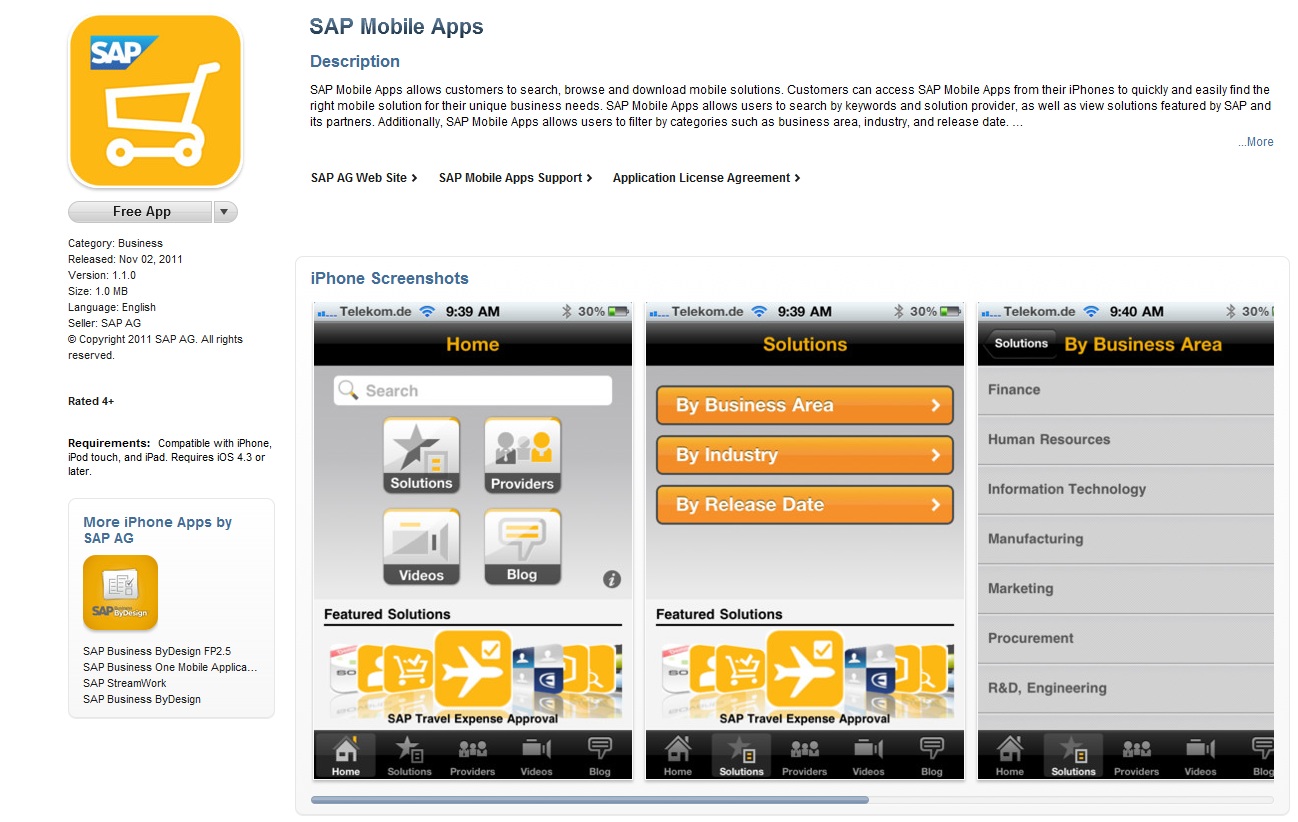 Longer-term, the SAP Store for Mobile Apps will be tightly integrated with the Sybase Afaria mobile device management software. Within weeks, users should be able  to launch the SAP Store from within Afaria, said Sheikh.

Afaria will also eventually be able to communicate with the Store so that only apps consistent with an employee’s role in a company  are displayed, as well as help configure and install new apps. That  integration will continue to grow. “Afaria will be the preferred MDM  solution,” he said.

The Store not only supports apps built on Sybase’s SUP app  development platform, but also apps built using other technologies such  as the cloud-based Business ByDesign or SAP NetWeaver Gateway, Sheikh  said. See the chart below. 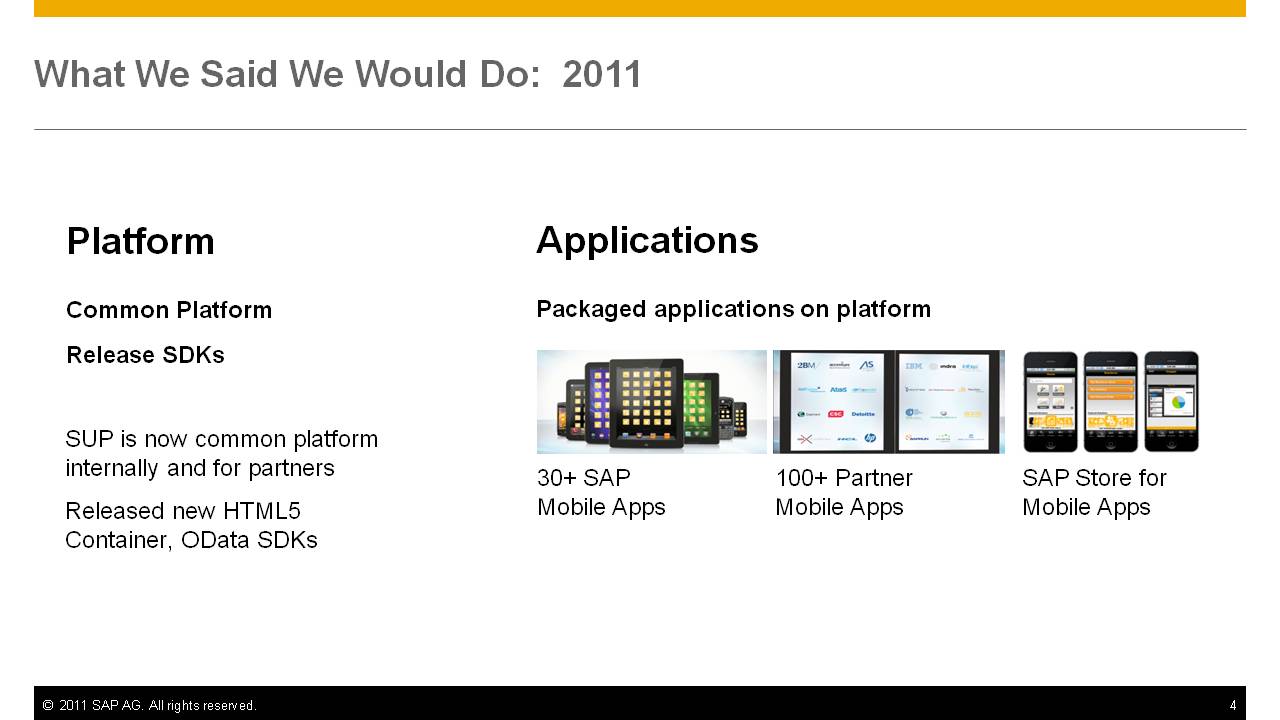 And what about the all-important financial terms? Developers will get an 85% share of all app license and subscription revenue garnered through the Store, said Sheikh.

In other words, SAP is taking 15% – just half of Apple’s 30% take for its App Store. Developers are not bound by exclusivity agreements, said Sheikh.

Sheikh said SAP will “respect” developers who wish to offer their apps on a freemium basis – i.e. free versions that can be converted later into paid via in-app purchases – but expects to receive their 15% cut of those subsequent in-app purchases.

As mentioned, apps must be certified by SAP before they can be sold on the Mobile Apps Store. That is free for the rest of the year.  How about for 2012? “It will be reasonable and competitive,” Sheikh said.

Granted, the Store remains in beta today. Many of the features mentioned above, such as credit card purchasing and the ability to selectively offer apps to users based on their job role, won’t be ready til first or second quarter next year.

Even still, can you name another vendor-operated enterprise app store that is more advanced than SAP’s? If so, please share with me and other readers. For now, I think SAP Store is further proof that big dogs can learn new tricks.