Looking Backward Before A Forward Look

As we approach SAP TechEd Madrid 2011, I realize that I never posted a number of thoughts brewing in my head that summarize some of what I experienced in the event we held in SAP TechEd Las Vegas that was sponsored by Women in Technology @ SAP and called: Embracing Inclusion – Driving Innovation.

But First: A few historical quotes

Eleanor Roosevelt was a women many of the present generation have little knowledge of.  While some might see her views as archaic, (and she was a contemporary of my own grandmother and I myself am a grandmother), I still find inspiration and meaning in the way she conducted her life. Her impact on the role of women, not only in the US, but also in the world, is quite remarkable, and she is considered one of the most noteworthy women of the 20th century for her humanitarian work, her civic work, both in her home country and abroad.

I’ve quoted some of her most famous public pronouncements as I found that they had relevance to the topic of inclusion as well as to the particular topic of women’s rights.  And I suddenly felt that she might have had a bit of a twinkle in her eye had she been present in our very culturally diverse event where she would have discovered that many of the men in the audience of our inclusion event, weren’t really “feeling the inclusion”.

“Too often the great decisions are originated and given form in bodies made up wholly of men, or so completely dominated by them that whatever of special value women have to offer is shunted aside without expression”
Eleanor Roosevelt

So this quote, attributed to Eleanor Roosevelt, really begins: “Do what you feel in your heart to be right- for you’ll be criticized anyway. You’ll be damned if you do, and damned if you don’t.”

Might this stand as an apt summary of the responses to the panel discussion that was the first part of the evening event called “Embracing Inclusion – Driving Innovation” held last month during SAP Teched Las Vegas?

Despite the courage we all attribute to Matthias Steiner for posting what he calls “About ‘Embracing Inclusion to Drive Innovation’” of this special evening event where he describes “feeling excluded from the inclusion event” (especially, as he notes, during the panel discussion), I am compelled to provide some alternative views of what might have transpired there to a number of the participants.  Because, as research literature substantiates, the discomfort we all might share in listening to women speak of their accomplishments (women included), is a predictable outcome of a discomfort many of us have when accomplished women express confidence in their own abilities .   (Why Women Don’t Like the Word Mastery – An interview with Harvard’s Beverly Slade).

“I’ve found the word “mastery” a little too loaded for women. It implies domination, being at the top of the pyramid. “Mastery” comes from the word “master,” which is a state or condition of being a controller or a ruler, and that generally doesn’t speak to women’s experience. I don’t think this is the main reason that women don’t like to describe their abilities in terms of mastery. I think what’s really happening is that in the expression of competence or excellence there are many social consequences that arise for women that don’t arise for men. Women are socialized to believe that “tooting their own horn” is dangerous, so they learn to keep their competencies to themselves. They also may find that other people are threatened by their expression of their ability and will want to avoid them, will see them as being “full of themselves,” or will even perceive that when they speak about their positive achievements they are lying, fabricating something that is beyond who they are and what they can do.”

Yes, I know you might say, “they (the panelists) broke the rules that were established when the evening was launched”.

“Leaving your title at the door” does sound antithetical to talking about your accomplishments, but how indeed does one establish credentials in the relatively short space of an hour’s panel time?  And how do we change this paradigm where women (in particular) do not have comfort talking about their competencies?

One of our “lessons learned” from the event, is that we need to deliver these accomplishments in a form that is more palatable, memorable and communicative: namely through our personal stories.

Well, we shall have a second opportunity, to test that topic and gauge responses from audience and panel alike when Dr. Patti Fletcher and a panel of European men and women discuss the topic of talent management, collaboration in an inclusive environment, and yes, broach the topic of minority voices in technology innovation.   With an event that embraces inclusion, I believe we have all the elements and the demography (smart men and women as audience, paticipants, and panel) to generate some lively discussion and more hopefully suggestions for actionable outcomes, in the ensuing Design Thinking Workshop.

More details of that workshop past and present in an upcoming post.

Looking forward to seeing you in Madrid and hearing if we accomplished our inclusion goals. 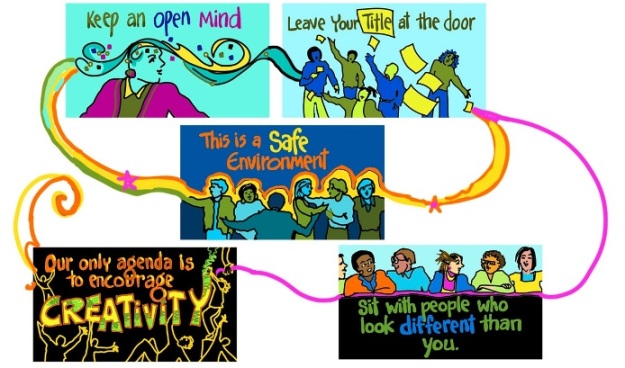