How BW-on-HANA Combines With Native HANA

There is a lot of wild guessing on how to combine the native HANA tools and assets – like HANA modeler or SLT* – within a BW-based environment. Initially, one might assume a conflict between a completey managed table schema – as imposed by BW – and an arbitray table schema – as created by SLT, Data Services or any other tool. In this blog, I will indicate how such schemas can happily coexist and consequently complement each other in a BW-on-HANA environment. Before I start please note that the usual disclaimer applies.

The question laid out in the title of this blog is one that will determine our conceptual efforts well beyond the pending HANA and BW 7.30 – Part 2. However, ORANGE will already offer some interesting pieces that have already hit the nerve of some of our pilot customers in a positive sense. In order to understand the extent of this I’d like to start shedding some light into what’s happening:

In summary it is fair to say that both approaches are attractive depending on the scenario. In other words, there is no general “good” or “bad”. To that end, it is appealing to look at ways to allow combining the two appraoches. Therefore, let’s turn to figure 1 and walk you through the general idea:

Let’s look at 3 “bridges” – see the dark red numbers in figure 1 – that allow to link data from both schemas to each other: 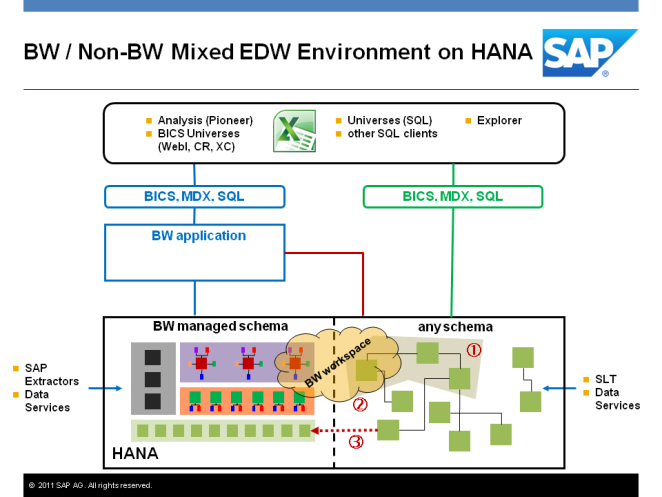 In the longer term, there is certainly much more potential in such an approach. However, for the ORANGE scope and timeline it is a first good shot in my opinion.

Former Member
November 1, 2011 at 5:09 am
Would I run my "orange" BW on one hana "applicance" sized for my BW system and then run my traditional "HANA 1.0" type scenario using SLT for replication on a second hana "applicance"?

Or you think SAP will allow us to do both of these scenarios on the same physical HANA box(and support it).

Thanks as always for sharing your very detailed technical BW/HANA information!

Hope you are doing well. you will be able to use a single HANA server  to host both the BW data and the non BW data (loaded using SLT, DS etc).
Obviously you have to make sure the HANA appliance is sized accordingly.

Thomas Zurek
Blog Post Author
November 1, 2011 at 11:23 pm
Hi Alexander,
it is meant that both schemas sit in the same HANA instance. Obviously the underlying appliance needs to be sized in a way that it can host the data volumes and workloads. The blog focuses on the options within the given boundaries.
Thomas

Former Member
November 4, 2011 at 8:05 am
Thank you very much for clarifying my confusion between the two approaches. Its a great blog.

Doing this i would be able to send data from one infoprovider to another based on my requirement.

Clarify me if my understanding is wrong. Thank you.

Thank you for your quick response.
I understood and completely agree with what you mentioned. But if i am not wrong the transient infoprovider is just like a multiprovider (both are virtual which does not carry data physically) and as per some of blogs which i went through on BW 7.3, we can create a DTP on top of Multiprovider.

So this question came to my mind based on the new developments in BW 7.3 thinking that we can create DTP on top of Multiprovider.

Thank you for your clarification.

So my last question is

The scenario mentioned in the youtube video below uses Virtual Provider to connect from BW to HANA, is this a new functionality or same as the BW Workspace option mentioned in your blog?

For details have a look at this document: https://www.experiencesaphana.com/docs/DOC-1463

"The disadvantage is that the virtual provider needs to be adjusted if the underlying analytic view (on HANA) is changed; the transient provider, in turn, is automatically adjusted."

Is the virtual provider on HANA  view in this case has a type -  "Definition: "Custom Data Marts"" from note  Note 1661202 - Support for multiple applications on SAP HANA ?

the virtual provider would be part of your BW-on-HANA system and reaches out - for example - to an analytic view inside a "custom data mart" on the same HANA system. I hope that this is what you were asking.

Maybe you know,  in this case are we must  additionaly purchase SAP HANA "Enterprise License"?

SAP does support the deployment of BW residing on the same production SAP HANA system together with other applications listed in the "exceptions" section of SAP note 1661202, but please note the following key considerations:

- The entire HANA system (including the part utilized by BW) must be licensed under the SAP HANA "Enterprise License" agreement.

Yes we must purchase Enterprise edition in this case.

Some day would we not have HANA Modeler or similar tools within BW as an additional tool to model analytic and calculation views within the BW managed schema. Then we could lose the distinction and have a more capable BW system that does what it does today and is enhanced with not just the HANA database, but the HANA tools as well.

this is roughly the direction that we are also discussing.

I have attended SAP HANA hands on here and my feeling is that if someone is implementing new BI solution and planning to use HANA why would they go with BW on HANA ?

As we all know that SAP HANA has non-materialized views and can be changed easily and gives you all kinds of transformation functionality.

Only thing that might want you to consider going SAP BW on HANA is delivered contents. But in my discussion with instructor he told me that ECC BW extractor will be available to use in SAP HANA directly.

I am still very confused with the direction of SAP BW product for future. And i love the way dimensional modeling is implemented in SAP BW. but with HANA and BO this modeling is taking same kind of approach, which other vendor like Cognos do.

Thomas, Do you think it make logical sense for SAP to keep developing SAP BW in future ??? I don't see it ..

This is still  very valid blog for a lot of situations in my opinion. The actual tooling and possibilities however have evolved for quite a bit in the meanwhile. What's your view on this topic now, 3,5 years later?

you are right. The general theme still exists and has proven to be very successful. In a customer workshop during Teched LV last year, 8 out of 10 customers reported that they ended up with a BW-HANA mixed case approach as described above, meaning that they leveraged BW where it is powerful, used native modeling where appropriate and even combined - e.g. - master data from BW with transactional data in the "HANA-only" schema. I think this is a win-win.

Tooling, as you comment, has also evolved. HANA studio and the BW modeling tools in Eclipse combine smoothly. Hopefully, we will see the Design Studio modeler there (on the same Eclipse version) too. Then, you have all you need within the same tooling env. And it is a very rich set of tools.

It is a general theme that drives our development efforts.

I have a procedure in SAP HANA which is generating some calculated fields. I need to populate the the data from this procedure into a table in my BW sytem. How can I achieve that?

Can we replicate the ECC tables to BW HANA Schema directly ? I heard the run time license does not allow this to do. I was said i have to load ECC data via slt to DSO directly through ODP instead of Direct replication to HANA schema ? Please throw some light on this please